The Texas running game in the second half

Share All sharing options for: The Texas running game in the second half

I was scheming when I wrote this, forgive me if it goes astray. We finished the first half with 37 yards rushing. That's actually more than I thought we'd get, but we totally dominated TCU in the 2nd half and gained 139 yards. So what did we do differently? A couple of things. A couple of plays actually. But we surrounded those two plays with our usual ground based faggotry. What follows is my breakdown of the second half running plays.

Ogbonnaya is in on the first series to start the second half. We use this series to determine what type of runner he is. North/south? East/west? Let's find out.

1st and 10. Double wides left in the shotgun single back set. We run one of our bread and butter plays where we ask the 220 lb Ogbonnaya to take two steps to his right to get the ball from McCoy, then reverse his field and follow the pulling guard to his left. TCU blitzes a corner on the slow developing play, and he easily tackles Obonnaya in the backfield for a gain of a yard. One of the other coaches in the box needs to tackle Davis the next time he tries to call this play. It doesn't work.

1st and 10 on the TCU 43. We're now in the offset I to the right. We catch a break when TCU decides to slant their front four right out of the play. Tiemann makes a nice block behind it, and Ogbonnaya gets 4 yards.

1st and 10 on the TCU 37. Straight I formation. Rocket pitch to the right, and Ogbonnaya gets tackled for a 1 yard loss while trying to bounce it to the outside. Who makes the tackle? The MLB. Who was assigned to block him? Tony Hills. We asked our left tackle to reach the middle linebacker on a sweep to the right. You can see Hills still chasing him when he makes the tackle. 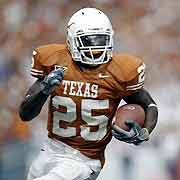 1st and 10 on the Texas 7. Charles back in. Offset I to the right. We run what looks to be a counter, but neither linebacker takes so much as one false step, Griffin doesn't block the backside DT and TCU blitzes a safety. Dockery and Hall both make their kick out blocks on the safety and linebacker, but we're still outnumbered at the point of attack. Charles gets tackled by the backside DT and the remaining linebacker in the backfield for a loss of a yard.

2nd and 6. Offset I to the left. Hall and Griffin both get beat badly to the inside, and Hall's man makes the tackle for a loss of 3.

2nd and 4 on the TCU 32. Aces with Charles directly to McCoy's right. Charles gets an underneath handoff and cuts up the middle behind a good block by Griffin for a gain of 16 yards. An honest to god quick hitting play. Inside zone. We actually ran the play pass off it when Ogbonnaya was in. Davis actually setting the defense up? Charles made both the MLB and safety miss.

1st and 10 at the TCU 16. I formation. Handoff left, but the backside DT tackles Charles for a gain of 1. Why did this play not work? Because we asked our right tackle to reach the backside DT lined up over Dockery on a play to the left. He couldn't. No tackle could.

2nd and 13. Aces again with Charles directly to McCoy's right. Underneath handoff and Charles takes it around the left end for a gain of 5.

First and goal on the 2. Jumbo set with Ogbonnaya at H back, Lokey at fullback and McGee as tailback. This is the play Tim Brewster put in the playbook before he left. Davis outsmarts himself and has the play go away from Ogbonnaya. TCU stuffs it for no gain.

2nd and goal. Realizing that there is a reason the H back is in the backfield, we run to his side this time. Touchdown.

1st and 10. I formation. Zone blocking only seems to confuse the line so they just leave Tommy Blake and the backside DT unblocked. They converge on Charles for no gain.

1st and 10. Aces with McCoy under center. Sh*t. We finally run a stretch play that sort of resembles the way the Indianapolis Colts run it. Looks like Charles aimed for the tight end or just outside him, and McCoy actually had to make an effort to get him the ball. None of this 'Here, you come get the ball' stuff. Ever watch Payton Manning run this play? Charles gets the ball with his shoulders square, busts through the line and cuts back for 32 yards.

1st and 10. Same formation and same play to the left side this time for a gain of 2.

1st and 10 at the TCU 43. I formation. Charles follows Tiemann on the cutback for 3 yards.

2nd a 7. I formation. Griffin, Dockery and Tiemann all run by the backside DT who tackles Charles after a 1 yard gain.

3rd and 6. Davis mercifully scraps the I and brings back the Aces formation. McCoy in the shotgun with Charles a couple of yards to his left. Underneath handoff to Charles who cuts up the middle behind a great block by Hills and scores. So what happened? The TCU linebackers sold out to stop the run giving Hills a great angle. The DE was the key. McCoy actually took a few more steps after handing off. The DE focused on him for a split second, and by the time he noticed Charles had the ball it was too late to do anything but watch as Charles ran by him. Did you notice that, Greg? Did you notice what the threat of a running QB can do to your running game?

So what did we learn? That the overwhelming majority of our yards came on two plays and scrambles by McCoy.

So what did Greg Davis learn? That our rushing game averaged over 5 yards per carry in the second half. Problem solved!