When you lay down with dogs, you wake up with fleas

Share All sharing options for: When you lay down with dogs, you wake up with fleas

Thankfully for Arkansas Razorback fans, they are used to fleas.

I did some Googling this morning to piece together quite a 5-year timeline for the offensive guru and nomad known as Bobby Petrino.

Dec 23, 2002: Petrino is announced as HC at Louisville; reportedly signed a 7-year deal worth about $500K per year

"This is a great holiday gift for U of L," said U of L President Dr. James Ramsey. "We look forward to welcoming Bobby and his family back to the U of L family."

Nov 20, 2003: Petrino clandestinely meets with Auburn President and AD to take over for Tommy Tubberville two days before Louisville takes on the University of Houston. Tubberville, you might recall, gave him an OC job at Auburn in 2002 after he jumped ship assuming Tom Coughlin was going to be fired. He was right the following year.

Tommy has stuck it to Auburn in salary increases ever since

Dec 21, 2004: Petrino signs new deal with Louisville which reportedly doubles his salary to $1M per year. Ironically, there is a $1M bonus if he is still at Louisville in 2007.

Dec 27 or 28, 2004: Meets with LSU officials about the HC opening there after Nick Saban leaves for the Miami Dolphins NFL job. Various reports also tie his name to openings at Notre Dame and Florida.

Jan 15, 2006: Reports surface that Petrino meets with the Oakland Raiders about their job opening

"I can't tell you how happy I am with the commitment and the confidence that Tom Jurich has in me and the university has in me," Petrino said after signing the contract Thursday morning. "I also wanted to make sure that everyone understood, I know I've said it, that this is where my family wants to be. This is where I want to be. I want everyone to really believe it."

Significantly, Petrino asked that a $1 million buyout be put into his deal, should he attempt to leave the school.

"I don't believe in [buyouts]," Jurich said. "If a coach doesn't want to be here, I want him to leave. But Bobby said, 'I want to put that in here to show people how committed I am to this place.' "

Jan 7, 2007: Petrino announces he is leaving Louisville. I wonder if his 2007 retention bonus was due on January 1st or the 6th.

Jan 8, 2007: The Atlanta Falcons announced Bobby Petrino of the University of Louisville as their new head coach with a 5 year, $24 million contract. 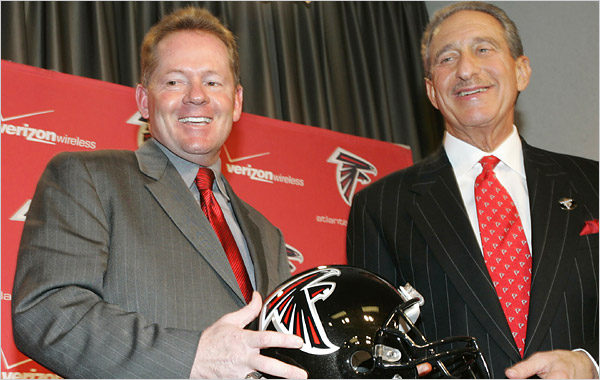 This is a marriage made in heaven

Dec. 10, 2007: Falcons lose to the New Orleans Saints 34-14 to drop their overall record to 3-10. Falcon owner Arthur Blank tells a national TV audience he has faith in Petrino and the franchise will weather the storm.

I can't wait to hop on a plane to Fayetteville

Dec. 11, 2007: Petrino resigns to take the head coaching position at the University of Arkansas.

I am going to stay here forever