Share All sharing options for: False Icons In Sport

Sport has always served as a narrative into which one projects their individual hopes and fantasies - and often their prejudices and world view. However, for those who comment on athletics for a living the narrative around certain figures rarely evolves. Specifically with those figures representative of a certain mindset purporting to hold some social significance to their generation.

Usually, it's harmless enough pablum and the commentary does no real damage outside of the people's lives it directly impacts - for example, the lazy portrayal of Ted Williams and Joe DiMaggio. Sometimes, it has darker implications. In today's school of socially significant sports writing - where attendance is mandatory for anyone who wishes to be taken seriously as a journalist; sport is just a vehicle, the reader a passenger, and the destination some meaningful social realization (sometimes worthy). The vehicle is the key piece to all of this and there is a real danger in falsely projecting layer upon calcifying layer of symbolism onto some person or event that is purported to reveal some greater truth about society.

Witness our modern perception and reverence of Muhammad Ali. Critically questioning his actual contributions or how he lived good portions of his life generally qualifies you as racist, harboring militarist sympathies, or generally reeking of the Establishment. To many, he is afforded a reverence on par with Nelson Mandela or Gandhi. These iconic truths are held to be self-evident. At least while the architects of perception still draw breath or possess currency. In turn, our popular conception of historical events and people within the sports world flow from these perceptions and are learned by rote; rejection of these commonly held beliefs risks banishment to, at minimum, an intellectual gulag.

First, the more harmless, but also instructive media portrayal: DiMaggio and Williams. Both are acknowledged as two of the greatest players ever. Yet DiMaggio is exceeded only by Ruth as an iconic figure. Paul Simon doesn't have the nation turn its lonely eyes to Teddy Ballgame when he sings of innocence and purity lost. As contemporaries, The Yankee Clipper and The Splendid Splinter were set at odds by a media that capitalized on the natural rivalry between the Red Sox and Yankees, a media that also worked to reinforce a false contrast between the two as athletes: DiMaggio The Winner, a classy and graceful team player and model athlete; Williams The Loser, a gifted, surly individualist dedicated primarily to his stat line. Further, each man's character was reflected in the respective success of their team: a fairly common media device that persists to this day.

Yet, it was all very personal; petty and small-minded, motivated largely by the fact that Ted Williams had a general disdain for Northeastern sportswriters. He found them unknowledgeable but opinionated, lazy, fickle, and frequently pedantic jock-sniffers. Williams also disliked these traits in crowds, though one-on-one with individual fans he was down-to-earth, gracious and attentive. He gave his time and money massively to various charities throughout his life; he lost five years in the prime of his career flying 38 combat missions as a Marine Corps Pilot in WWII and in Korea, and, in unprecedented fashion, he was the first baseball Hall of Fame inductee (in 1966) to use his induction speech to comment on the injustice of the exclusion of Negro Leaguers from the Baseball Hall of Fame. That sparked a debate that led to their eventual inclusion in 1971. He was also crucial in publically accepting Pumpsie Green, the first black Red Sox player (the Sox were the last team to integrate in baseball - 1960 if you can believe it) into the team and Boston community. Without Williams advocacy, it would have turned ugly.

When Williams' generation of sportswriters passed, the next reflected on him through the prism of a Vietnam era consciousness where his blindly patriotic war service was more damning than inspiring and his contempt for their profession evidence of some right wing suppression of voice rather than his more simple disdain for jock sniffers. It's only fairly recently that Teddy Ballgame is getting a fair break in the iconic narrative of sport.

DiMaggio, baseball demi-god, famously cold in his dealings with friends and manipulative with anyone who could further his career, given to private clubhouse sulks, obssessed with his media image and portrayal, who served in World War II as a PE instructor where his primary duty was to play baseball exhibitions, and who assidiously avoided comment on anything remotely controversial, was in many ways a harbinger of today's corporate athlete. But he is imbued with significance, an emblem of a time of purity. His name is still immediately evocative of a certain imagery and positive feeling.

So too is Muhammad Ali. To hear it from much of today's sportswriting world, most recently Bryant Gumbel on Real Sports, Muhammad Ali was a champion against state oppression through his opposition to serving in Vietnam, a vessel of righteous anger against the system, the living embodiment of the struggle for black Americans to achieve dignity - his struggle was their struggle, his eventual triumph mirrored their own. If you're against Ali, what could you be for? Well, Superman perhaps. As a little kid, I owned a comic book that featured Superman boxing Muhammad Ali in front of aliens. And if I remember correctly, Ali was winning.

Today, no one would find it strange to mention Martin Luther King and Muhammad Ali in the same sentence when discussing the undeniably righteous cause of black America in the 1960's. Ali is a meme deeply imbedded into our psyche. He lit the torch in Atlanta not as a former Olympian, but as a symbol of racial healing and reconciliation. We had wronged him, as we had wronged a whole people, and his presence was demonstrative of a New South, a New America, the fire symbolized a journey completed. It was powerful, it was uplifting, and it was...wrong. Plainly wrong. Not the very real struggle of black equality during Ali's lifetime, mind you, but the pervasive notion that Ali is its best or even a passable representative.

Consider the name. The original Cassius Clay was actually a famous 19th century abolitionist, a namesake passed to Ali through his father. The 19th century Cassius Clay was also a fighter: a militant anti-slaver who bravely lived and agitated in the heart of pro-slavery Kentucky where he ran an abolitionist paper known as True American. He survived multiple assassination attempts, took a half dozen serious mob beatings, and was one of Abraham Lincoln's most trusted friends, refusing to accept a major general position until Lincoln signed the emancipation proclamation. That's Cassius Clay. Ali, upon his conversion to the Nation of Islam, changed what he called "his slave name" - Cassius Clay - to Muhammad Ali. Taking a name from the only other culture in the world whose black African slave trade exceeded that of Europe. This fundamental and willful ignorance would color much of Ali's early adult life. 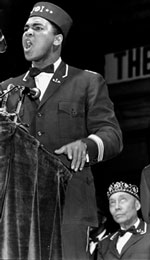 Ali officially fell into the web of the Nation of Islam in 1964 and they provided his marching orders for the next decade. Far from being a racial unifier, Ali consistently preached segregation and separation of the races. Miscegeny was as distasteful to the Black Muslims as it was to a Southern cracker or a Boston Southy. Whites were "the devil." The Honorable Elijah Muhammad was God's living prophet and he taught that the black man was the original man and that an evil scientist named Yakub had created whites who then overthrew their rightful overlords and proceeded to erase all evidence of their advanced civilization. That the Living Prophet was also raping/coercing every woman in the NOI he could get his hands on (including an incestuous pregnancy with his daughter) was reasonably troubling evidence against his divinity, but c'est las vie. Ali was under his thrall and his advocacy recruited thousands into the Nation Of Islam.

That part of his life - a significant part of his life - is glossed over considerably in all modern portrayals of Ali. Indeed, if depicted at all, the NOI is portrayed as a sidenote or possibly even a legitimate response to white oppression and systematic disenfranchisement. Dozens of his public statements espousing race hate, denigrating non-NOI blacks, and preaching the total irreconciliability of the races have been bleached from the record like bones on an ancient caravan route. I don't think Ali was a particularly hateful person deep in his heart, but he was easily led and easily manipulated - generally not the traits one looks for in their heroes.

Similarly, his opposition to serving in the military and to the war in Vietnam is portrayed as a principled stand against a bad war; Ali a symbol of courage and resistance. Whatever your thoughts on Vietnam - the why is as important as the what. As a conscientious objector his rationale was a religious one - or more bluntly, an objection stemming from a half-baked race cult led by a madman - and it came on strict marching orders from Elijah Muhammad. It was not principled, it was not considered, it was not terribly brave. Unless you're impressed by a marionette on a string. It's doubtful that anyone would wax poetic if Tom Brady rejected service in Iraq because of his profound belief in the principles of the Aryan Brotherhood. I can hear him now,"I ain't got not quarrel with them Iraqis, ain't none of them ever called me Honky." Although it would be funny if they did.

But Ali, we are told, was an inspiration to black people. All of them. Like some monolith. When Ernie Terrell and Floyd Patterson refused to call Ali by his NOI name - and most black Americans thought that the NOI was completely insane - he purposefully punished them in the ring, not finishing them when they were in trouble so that he could continue to cut them up. Ali taunted Terrell after every punch late in the fight: "What's my name now, Uncle Tom?" Any black man who didn't follow the Nation was an Uncle Tom and completely inauthentic.

Ali's dealings with Joe Frazier were also interesting. Frazier was born in absolute poverty in rural South Carolina, where he picked cotton in searing heat and endured racism and petty indignities that Ali's largely middle class youth never saw. He fled to Philadelphia and fought his way up - as an overachieving 5-11 heavyweight. When Ali was suspended for refusing service, Frazier gave Ali financial assistance. Upon reinstatement, Ali began to deride and mock Frazier as "the gorilla", "the black monkey", and "dark black and ugly" while Ali always made a point of contrasting himself - fair and light-skinned - as "pretty." I won't spell out the bitter hypocrisy here. Frazier never forgave him. Proving that no act of charity goes unrewarded. 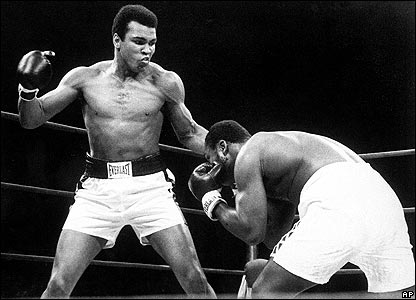 You can argue that Ali's beloved status is a function of his heartbreaking Parkinson's disease, his modification of his views over time, or even the incredible guts and skill that he showed in the ring and, though all undeniably true, that's sidestepping the issue. Today, Ali is held up as an American icon with vast social significance to anyone who is not a Strom Thurmond devotee; and the courage he is said to possess has nothing to do with his disease or his boxing acumen. He is said to possess a deep moral courage, though how this has ever been substantively demonstrated is a mystery. He left the NOI for Sunni Islam in 1975 - the same time as the group's schisming allowed it, several years after they'd assassinated Malcolm X and long after Elijah's horrific corruption had been revealed. His historical iconization mocks real black achievement and Ali the symbol, not the man, represents the worst face of the sports media's smugly insistent, equally ignorant, false social conscience.