My Weekend in Sports

Share All sharing options for: My Weekend in Sports

My sporting weekend began watching myriad Super Bowl hype and analysis shows Friday afternoon on ESPN and the NFL Network. I tried hard to get into it (I put on eyeblack), but when Steve Young, Mike Mayock, Chris Berman, and Tom Jackson intoned solemnly that the game would be decided by playmakers and that the team which puts themselves in a position to win will have the best chance of winning (by playing all four quarters!), I went out for a mountain bike ride. While I rode, I pondered the genius of the observation that If you give Kurt Warner five or six seconds to throw he will hurt you. So true. So true. No one understands the game like a former NFL player.

So my real sporting weekend began with the Texas/KSU game.

It wasn't on my local channels, so rather than be consigned to ESPN Gametracker (Damion James has 2 point dunk shot) I figured out that I could watch it live on ESPN 360 by pirating my neighbor's wireless; apparently his DSL provider had cut a deal with ESPN for game rights while I pay Comcast $150 a month to not do that. So I watched the game for free unless you think my neighbor now having remote access to all of my banking passwords has an "associated cost." I don't know. I'm not a numbers guy.

Trips Right and The General do a nice job breaking it all down, so my gratuitous contribution is this: Barnes has a number of pretty good players, but each has at least one glaring weakness that isn't compensated for by the man on his right or left.

If Atchley had become the 15 ppg 3 point bomber and sweet hook shot maker I thought he would be, we could cobble together a nice little offense and stop the domino effect of self-implosion, but with Connor demonstrating the focus of Gary Busey in Amsterdam, a non-shooting point, Lil Iverson at SG, and an athletic hybrid forward with the basketball IQ of a rutabaga, it's not happening. Barnes certainly deserves blame, but I think we need to be honest about the particular dilemma he faces when he puts any of our personnel groupings on the floor. It's the same crisis Henry James experiences when he walks into a Men's bathroom.

My dumb layman's basketball solution for a team with athletes that shoots poorly, goes ten deep, and lacks true point guard play is to pressure. I'm no expert, mind you. I just like doing the stuff that takes your team from 17 down to tied in 7 minutes.

I cleansed my sports palate with the ginger of the most anticipated MMA fight in recent memory. I headed down to Sailor Ripley's nursery/orphanage/Lost Boys hide-out to watch GSP take on BJ Penn. GSP methodically whipped the shit out of Penn and analysis is almost unnecessary beyond writing just that. I thought GSP would win, but I never thought it would look that easy. GSP transitioned from half guard to side control at will, he took down BJ whenever he felt like it, and he made Penn fight for space the way Jessica Simpsons battles her Dukes of Hazzard skinny jeans. Penn's camp is complaining that George was vaselined like John Holmes' first girlfriend, but that's just pride talking. We learned two great lessons in this fight: one, GSP is the telegenic future of MMA; two, the skilled small man who gains weight to fight the skilled big man generally gets his clock cleaned. I hope GSP is smart enough to remember that when fans beg him to fight Anderson Silva at 185. 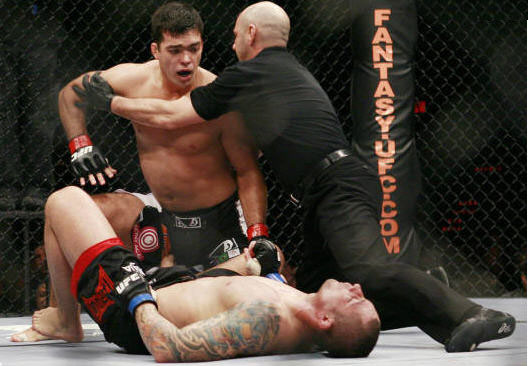 Lyoto Machida was also impressive, discarding Thiago Silva like a sanitary pad in a Brazilian landfill. Lyoto is one of those rare guys who can hit with more power backing up than planted or coming forward. Very Chuck Liddell. Throw in the fact that his jiu-jitsu is very solid and he's developed a nice little takedown game and you've got a legit contender for the 205 title that no one wants a piece of.

Jon Jones - a 21 year old Greco-Roman - demonstrated a bright, bright future as he dispatched UFC veteran Stephan Bonnar with style. Suplex, spinning elbow, lateral drop, the only thing missing was a Jimmy "Supafly" Snuka cage jump. He has more leverage than Goldman Sachs. Jon, if this doesn't work out, we're holding a LB scholarship for you.

The rest of the fights were competent, if uninspired. Karo Parisyan, once of the most exciting young fighters in MMA, has officially become a boring douche. He won a weak decision over Lil Kim.

Finally, the weekend concluded with what is usually one of the most hyped, overdone, bullshit false dramas in the history of the world. No, not Falcon Crest reruns. The Super Bowl. Well, at least that's how it used to be. Sunday's game was arguably the best Super Bowl ever played, even with game officials who loved screen time and who wanted desperately to fill their specialty bets. The 14 point swing of Warner to Harrison will live forever in Super Bowl lore. I don't need to tell you that Larry Fitzgerald and Santonio Holmes are bad, bad men or that Mike Tomlin and Ken Wisenhunt represent two coaches I'd love to play for - you saw the game too and I'm not interested in mastering the obvious. It was a phenomenal contest.

Step back from the guacamole dip and put those chicken fingers dowwwwwwn. "IT'S BOSS TIME WAL-MART SHOPPERS!" What's with the "The Boss Still Has It!" chatter I'm reading everywhere. I like Springsteen, but c'mon.

The opening where he hurled his guitar to some roadie who comically staggered under its weight before wiping out was apropos for what we were about to see. Apparently, I was supposed to be impressed by his great energy, but I kept looking at his old ass band and laughing at their parody of a young man's game - the layers I saw weren't in the music, but on corpulent E-street bodies to conceal lots of easy living. Rock n' roll is like Logan's Run. You should be slaughtered when you're 35.

Stevie Van Zandt looked like a walrus in a pirate outfit. Pirates of the Pinniped - I saw that show at Sea World when I was 11. Put a hit on your dietician, consigliere. I like that Clarence Clemon's dressed like The Undertaker in his sax solo. Why didn't he put Max Weinberg in a bodybag? Maybe his LifeAlert bracelet went off and it startled The Big Man.

Springsteen now has a Dylanesque gristliness and a constant facial expression that suggests he's taking a massive and intense dump full of razorblades and peanut shells. The kind where your pants fit better afterwards. There was that old red-haired broad, too. Looking skanky but wise. I always like when the gospel band gets rolled out in their imam robes to add both dignity and scale to the proceedings. Springsteen closed the show by swinging his guitar around which demonstrated his vitality even more than a jumping jack. Or lawn darts.

Glory Days blew ass. The attempt at AUTHENTIC! ROCK! BANTER! between Bruce and Little Stevie made me groan, although it was properly penalized by the official for Unneccessary Sucking.

Positives: Born To Run was good. It's Born To Run. It's always good. They also kept showing a girl with great tits bouncing around in the audience like she was on a mini-tramp. Or was a mini-tramp. I kept praying Bruce would transition into Dancing in the Dark, grab the little lovely out of the audience, and let her hop around like a young Courtney Cox (before she starved herself so much that she came to resemble a giant head mounted on a popsicle stick). Anyway, that didn't happen.

Tell me about yours?