The Deadliest Warrior on Spike

Share All sharing options for: The Deadliest Warrior on Spike

Needless to say, this show is what Trips Right and I would produce if given an unlimited budget, cameras, a warehouse, and a desire to settle our eternal "Could Margaret Thatcher defeat Benazir Bhutto?" in hand-to-hand combat debate.

The basic premise is this: various great warriors of history (and this is amusingly debatable as you'll soon see) face off against each other in a wooded meadow in a fight to the death. Tactics, strategy, armor, and armament are all assessed through a combination of thoughtful simulation and wild ass guessing. They then run computer simulations 1,000 times to determine the victor, followed by two fighters acting out the scene. We have, to date, seen battles between the following:

The demonstrators are probably the most impressive part of the show as these are all guys who have spent a lifetime practicing these weapons and it gives you a certain measure of respect for the crude destructive power of swords, bows, and axes when wielded by a skilled practitioner. In that sense, it makes military history come alive. I was fairly impressed when one of tne of the samurai bowmen called out various shots before the arrow left the string in a bored monotone as each hit exactly where he aimed: Left eye, thwack! Right eye, thwack! Heart, thwack! Deltoid of sword hand, thwack! Good stuff.

And coming up in future episodes are (folks, I'm not shitting you, I swear): Arrrrrrrrr! Gunpowder versus gallantry. Lancelot takes on Jack Sparrow in a duel to the death...or - in the pirate's case - the rape. Let me suggest that if the pirate doesn't get the knight with his first shot, he's in a world of hurt. Just wait, this gets better... 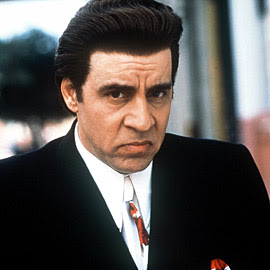 Can't wait to see this epic warrior confrontation. In this corner: a heavily inked Japanese man with no pinky fingers and difficulty gaining access to firearms, highly skilled in beating up Korean prostitutes! In that corner: a morbidly obese Italian from Newark wearing a track suit, skilled at harassing deli owners and infiltrating union leadership. Riveting.

I salute the randomness of this pairing - I just find it amusing. Though I mock neither. The Maori are undoubtedly fierce bastards and the Shaolin Monks will wow us with Drunken Angry Monkey and Recalcitrant Bumblebee. At least we'll get to see a haka from a pissed off Junior Seau prototype and a Jackie Chan clone making a spear dance.

I'm not sure why they pick specific people here rather than Zulu vs Highlander, but it should make for great fun. The Zulu may win the fight, but the Scotsman will do it cheaper. Though I'm not liking a hide shield against a broadsword. And what about the fireballs from his arse?

(I'm shaking my head and laughing )

Boy, there's a proud warrrior tradition for you.

Let's get this straight: little Tommy O'Shaughnessy, unstable little bastard, fresh off of Shankill Road and the council estates attempts to knee cap Mustafa Ala-Aziz, illiterate Islamic Fundamentalist and mule fornicator. That should be a great matchup. The IRA man sets up a car bomb on the Taliban's donkey while the Taliban guy sets up an IED in the local pub under a Guinness. Both wait for seventeen hours. Bored, the IRA man tries to flush out the Taliban guy with a fat weepy Catholic girl parading around with open ankle while the Taliban guy clinks whiskey glasses together to form an Irishman's mating call. Good television.

I mocked some of these matchups, but I'll watch them.

I'm not sure if you guys have seen it, but if not - take a look.

If you have, let me know what you think about it.

What do you think of the show? What warriors are missing?