Share All sharing options for: 2009 Texas A&M Football Preview: State of The Union

Aggie football players are a lot like the Aggie Corps of Cadets.

Some of them are the real thing and deserve your respect, but most play dress up for four years pretending to be something they’re not and end up selling insurance in Tomball.

Witness the perfect illustration of my point. West Point. While A&M's football team struggled to a 21-17 victory against an Army team that lost by 18 to New Hampshire, the Corps struggled to bond with the men whose pajamas they wear at night:

West Pointers don't do this

corps turd: Howdy, fellow comrade-in-arms! Let's clasp forearms in the time-honored tradition of the warrior and speak of Yorktown, Inchon, and Normandy. Whoop!

West Point Cadet: Pleased to meet another soldier. We might run into each other after school. I'm in Afghanistan after I complete Ranger training. Where are you posted after graduation?

Of course, there are differences between A&M football and the corps. One group comprises athletes and the other spent most of their high school life dangling from a locker hook. But Sherman has been working hard on the recruiting trail to alleviate that. 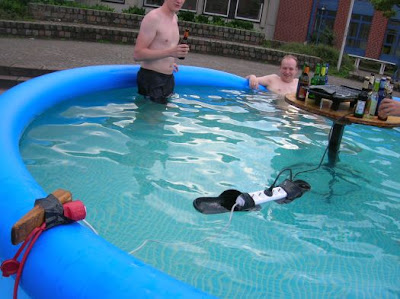 Mike Sherman won Aggie hearts and minds this Spring when he lashed out at his doubters . Needless to say, some had questioned his judgement when he took the job and anointed troubled RB Micheal Goodson as his bellcow on offense and a team leader. That he hadn't bothered to find out that Goodson's leadership skills were on par with Idi Amin's proved to be regrettable. Particularly when Goodson led machete-wielding boy soldiers in the slaughter of several dozen Punjabis in the engineering library.

Sherman also regrets placing Michael Bennett in charge of evening curfew, Jorvorskie Lane in charge of team nutrition, and advising Bill Byrne to invest the Aggie athletic budget with Bernie Madoff. He is, however, a master of motivation and counter-espionage.

Speaking of A&M Athletic Director Bill Byrne, if a man tried to massage your leg under a bathroom stall, you would fling open the door expecting to see someone that looks exactly like...Bill Byrne. He's from Idaho too. Just sayin'...

Sometimes appearances are not deceiving. I'm a tremendous fan of thin middle manager glasses over beady mackerel eyes and the White Rain coiffed hairstyle favored only by 1980s news anchormen and Liberty graduates. It speaks of stability and competence. I notice that he's also clasping one of his hands to prevent it from flailing about like Peter Sellers' German rocket scientist in Dr. Strangelove. His expression is that of dopey malevolence, suggesting a Hereford crossed with a wolverine. This dude is barely hanging on.

Every week Byrne blogs a cry-for-help for the Aggie faithful in which he celebrates wins in women's archery like a two year old who made poo and downplays pesky football losses as part of some "process" to which only he is privy, mocking any idea that he understands which sport provides revenue and fan interest. Amusingly, he refuses to call Texas by name (we are "our friends in Austin" - like he's a made guy in Donnie Brasco). Read this representative gem from his weekly blog:

In this last message until mid-June, Iխ pleased to announce four positive additions in Aggie athletics Рtwo arrived at by vote, and two by hiring.
? Hullabaloo is the name of our new spirit band for volleyball and basketball.
? And we are Plantersՠwinners of their Ҏuttiest Fans in AmericaӠcontest, good for $10,000. These are exciting times to be an Aggie.

Apparently coherence is too much to ask from a man when he is basking in the afterglow of a Planter's Nuttiest Fan title and naming the new volleyball spirit band Hullabaloo. Exciting times indeed, Bill.

There are offenses to nature and then there is Aggie offense. Let's move from the former to the latter. It's a short stroll.

The Aggies are actually loaded with young talent at RB. Former South Texas phenom Bradley Stephens isn't one of them as he's still adjusting to playing against black people. However, Cyrus Gray is faster than Tom Rossley's pacemaker and the explosive Christine Michael proves that Johnny Cash's "Boy Named Sue" theory of child-naming really does work. I'm going to name my son Penelope and he'll drop a 4.4 40 and a 350 powerclean when he's a high school senior. You, dear reader, will ignore Mr Cash's advice and name your son Logan Steelcock and he'll end up wearing mascara and reading vampire literature.

Tom Rossley welcomes you to the Aggie QB graveyard

QB Jerrod Johnson certainly looks the part - he's got the frame, intelligence, and he played pretty well last year, but burdened with the albatross of the Aggie OL he seems destined to be buried in the Great Graveyard of Aggie QBing, having just placed a down payment on an acreage near McNeal Meadows. It doesn't have direct sight lines to the stadium, but they'll assign a corps turd to it with a chalkboard to keep a current tally of Aggie interceptions.

The Aggie OL is the stuff of telethons. They moved defensive lineman Lucas Patterson to LT to be a starter and have since moved him back to DL when they realized that they couldn't stop the run any more. Rob Peter, pay Paul, move Lucas. The remainder of the starting OL is forgettable and is backed up by an assortment of Gulf Coast beach detritus and freshmen. Lee Grimes has the lateral quickness of a dugong disemboweled by a boat propeller blade. Many Aggies predict that true freshman Rhontae Scales will be a starter at LT by Week 3. I don't doubt that Rhontae is a fine young player, but Desperation is a vile cologne. I'll set the season line at sacks allowed at 35.

Aggies, the good news for you is this: Sherman understands and can evaluate OL. He's bringing in quality guys and he'll coach them up. The bad news is that you'll see the positive effects some time in October of 2011. So my suggestion is that you take up an alternative hobby and check back into Aggie football in 27 months.

Defensively, A&M will probably start eight underclassmen and these youngsters will be led by DC Joe Kines, who speaks authentic Western gibberish and once had a torrid affair with Constance Talmadge. A&M fans are dissatisfied with Joe mainly because his defense gave up 37.4 points a game last year and he continues to absentmindedly wear Alabama gear on the Aggie sidelines. Dude can't find his car keys and his defense gets anime monster-raped every weekend and you expect him to remember which school he's at? Prioritize, Aggies.

The DL is smallish and inexperienced, but Lucas Patterson is back! That's right. Lucas Patterson! He's back! Tony Jerod-Eddie plays like Jamie Lynn Sigler, Matt Moss has the explosiveness of his surname, and Eddie Brown emphatically answers the question "What can Brown do for you?" with "Never draw a double team and provide no pass rush." Other than that, Mrs Lincoln, how was the play?

At LB, there's promise. Von Miller is the designated rush LB and he is said to be the real deal. WLB Ricky Cavanaugh was a big-time high school player who flew under the radar because of grades and I'm curious to see how he pans out. LB Kyle Mangan is nicknamed "Ice Cream" by his teammates because he's known for adding dead weight.

The secondary is rough and sophomore safety Trent Hunter is its diamond. Good young player with instincts that I had completely discounted as a recruit. Other than Trent, they're counting heavily on JUCO transfer Coryell Judie to pan at one CB and they may need a true freshman to pan at the other if they don't want to trot out the same old victims.

Are you getting the idea that I think the Aggie defense is outmatched?

The overall schedule is manageable: they should go 3-1 in non-conference play and they get Iowa St and Kansas St. The season hinges on a game in College Station against Baylor. I was going to write "archrival Baylor" but I'm trying to ratchet down my cruelty index towards the end of the preview.

Still, I’m picking the Aggies to finish last in the Big 12 South. Admittedly, I dread having that prediction thrown in my face when they finish 2nd to last, but I live boldly and dangerously - the way Mike Sherman takes his Metamucil jello shots.

Off of Bill Byrne's tits.