It's common belief that players improve most from their first year to their second and then the year-to-year improvements slowly decrease from there. It makes perfect sense and following the game seems to confirm that belief based on real results. So I decided to run a little test to see if we could detect that reality in the statistics. As you'll see, the results surprised me and I'm opening it up for discussion to see what we think the explanation is.

Because I don't have comprehensive enough stats for each individual season, I used the NCAA's official statistics page. As this was partially prompted by Gene Claude's comment here, I decided to use passing efficiency numbers. The NCAA currently publishes the Top 100 in this statistic for every year going back to 2000, so I grabbed all of those player-seasons and filtered them for players that had more than one year on the lists. I then categorized the player-seasons based on the player's classification during the season in question. Finally, I compared the player's passing efficiency for the year to their passing efficiency in the previous year and averaged the results for all players in all years. 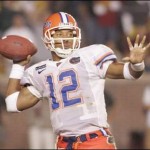 This guy progressed the normal way

Interesting. The average improvement from sophomore to junior year is lower than that from freshman to sophomore year. This is not surprising and fits in nicely with the hypothesis. However, the average improvement jumps up again from junior to senior year. Why would that be? My initial guess was that my sample was simply biased with too many players that had only junior and senior years in the data. This would of course cause a situation where although they were transitioning from their junior to senior year they were also transitioning from their first year as starter to their second. So I ran the numbers again but this time only for the 22 players who had 4 years in the stat tables:

Okay, that just made things more pronounced in the same direction and actually a little nonsensical given that four-year starters, on average, have basically flatlined between their sophomore and junior years. It's only 22 players, though, so we shouldn't read too much into that. At this point there's only one more way I can think of to run the numbers, and that's based not on the player's classification but on how many previous seasons they have in the tables. For this table I could only use the final stats from 2003-2008 because using the 2000-2002 numbers would have inaccurately assigned previous playing years without data from 1999 and before. 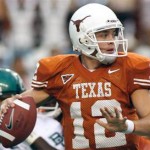 Colt, you did it wrong. Get it right this year, please.

No matter how we look at it, the answer stays the same. College quarterbacks appear to improve nearly as much from their junior to senior year, or third to fourth year, as they do from their first to second year. In between, during the second to third year transition, they don't improve as much. I'm interested to see if anyone has any ideas as to why, whether they be physical, psychological, or otherwise.