Comcast's Proposed Takeover of NBC: Why It Matters To You

Share All sharing options for: Comcast's Proposed Takeover of NBC: Why It Matters To You

There have been rumors for a while that Comcast and GE are in talks about a deal in which GE would spin off its NBC Universal Unit (including the cable channels) into a new company that would merge with the content assets of Comcast.

Why does the proposed takeover matter to sports fans, or more specifially college football fans? Because the head of Comcast, Jeff Shell wants the new company to compete with ESPN for premier sports product.

Comcast already owns Versus and the Golf Channel as well as several regional sports channels. NBC brings Notre Dame football, NFL football (which includes being in the Super Bowl rotation) and the Olympics.

Shell thinks this is an ideal situation to blend product with distribution, and that the market can support another major broadcasting outlet spending money for major sporting events.

"We have a huge opportunity," Mr. Shell said of Versus, to create "another sports brand in America,"

The proposed deal would have Comcast own 51% of the new company with GE holding the other 49%. The deal would also allow the new company to be like ESPN and have dual revenue streams -- advertiser dollars and cable subscription fees.

They obviously are going to need new product -- and this is where the Big 12, as well as the Pac 10 and the ACC can see an opportunity to make deals close to what the SEC has with ESPN and what the Big 10 has with its own network. 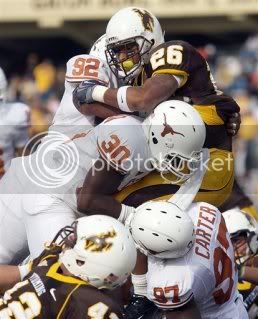 If the proposed merger between NBC and Comcast becomes final, then the Big 12 and Versus may become BFF's

There is one interesting new facet to this proposed new company. ESPN right now has the ability to put its product on different platforms, so its partners, like the SEC, can have all their games on either ESPN, ESPN2, ESPNU or ESPN.Com.

Comcast supposedly is thinking about putting their premier football games simultaneously on multiple channels, with each offering different camera angles.

As for the idea of dual revenue streams, it is why ESPN can spend a couple billion on the SEC, and it is why Comcast wants in on the action.

According to industry reports, advertisers spent an estimated $10.6 billion for commercials in sports programming across U.S. broadcast networks, cable networks and local TV stations last year. Sports channels also collected $9.2 Billion in cable subscription fees in 2008, which was 40% of all the basic-cable TV subscription fees for the year.

There is another angle for Comcast in this. They believe that by competing with ESPN they cannot only get their piece of the subscription pie, they can leverage their position to cut into the WWL's share when negotiating for the fees that they pay ESPN.

Maybe the deal doesn't go through. Maybe it turns out to be a dud like the Time-Warner-AOL deal. But if it gets off the ground, the short-term beneficiaries will be the BCS conferences not named SEC and Big 10.