A Message from Jamie Pollard

Share All sharing options for: A Message from Jamie Pollard

Hello, fellow Cyclones. The Athletic Department would like to share some exciting news with ISU alums, fans and well-wishers - the adoption of a new Cyclone logo!

While the old logo has served us well throughout the years, we believe this new design will better capture the essence of what Iowa State stands for.

By now, you are all familiar with the current logo. It has been our university's face to the sports-spectating world for nearly a decade.

There it is. Clean. Simple. Elegant. It's a classic, almost archetypal, symbol that conveys one, coherent, easily-understood idea: cyclone. There's simply no mistaking what that angry bird with a tornado for a lower body, a human-like torso, muscular arms, and four-fingered hands grasping a banner that reads "Iowa State Cyclones" represents. It's universal. It's obvious. It's clear.

Just once, I'd like someone to look at the Iowa State logo and think "What the hell is that supposed to be?" We're Iowa State, for crying out loud. We need something to differentiate ourselves from the pack. Something unique. Something that allows our fans to proudly exclaim: "Those slow, undersized players getting their asses kicked out there aren't just your run-of-the-mill cyclones. They're the Iowa By-God State Cyclones!"

In sum, we need a cyclone logo that is something more than just the obvious and cliched aggregation of a tornado, a cardinalis cardinalis, and a half-naked, four-fingered bodybuilder.

It is that drive to differentiate ourselves from the herd that spurred the Athletic Department to create a new, unique logo for our University's sporting teams. A local graphic artist and cartoon enthusiast was commissioned to design dozens of concept sketches, some of which are reproduced below. 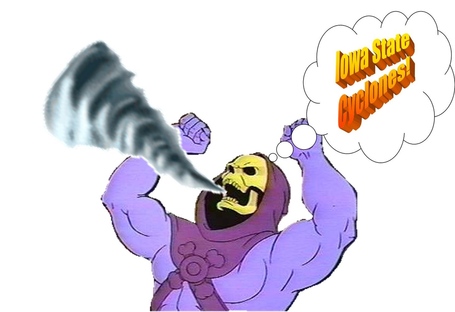 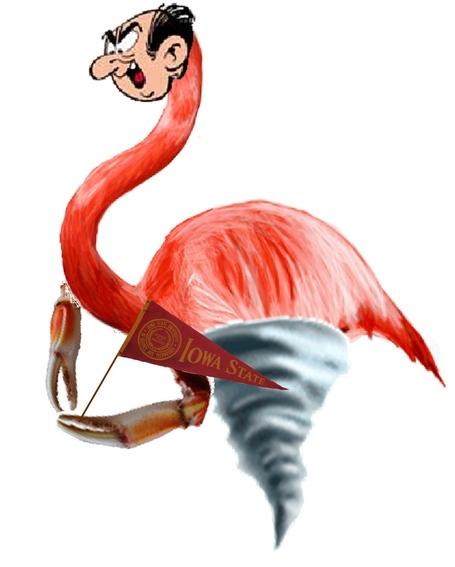 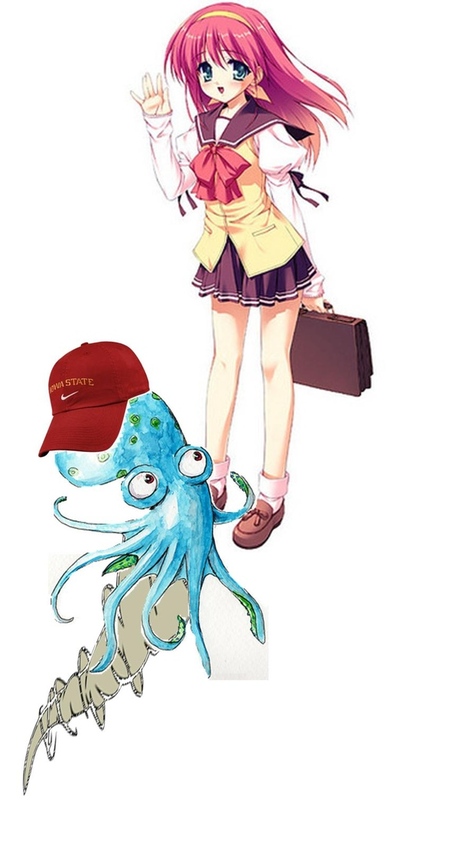 While the concepts pictured above were certainly intriguing options -- and, unquestionably, apt representations of what it means to be an Iowa State Cyclone --, we ultimately settled on a revision of the current logo. As you will see, this revision represents a significant departure from the Bauhaus-inspired, straightforward minimalism of the flying-enraged-bird-headed-tornado-monster Cyclone logo. Put simply: after years of using an understated, bare-bones design, we're finally jazzing it up with a little detail.

Without any further ado, I proudly present the new and improved Iowa State Cyclones logo: 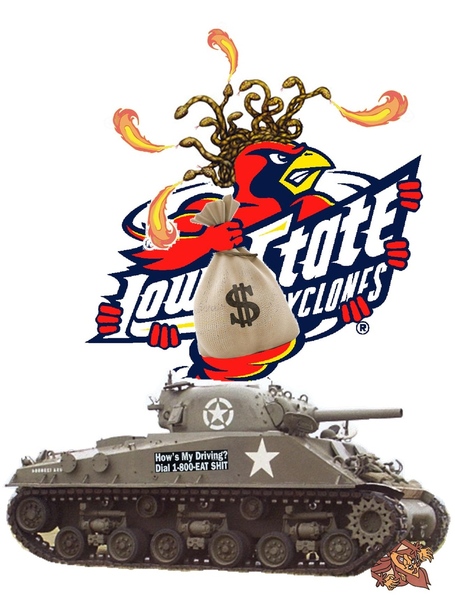 Pretty sweet, right? A few notes are in order to explain the new additions:

First, we wanted to ramp up the logo's ferocity. The old angry bird is fierce, for sure. But we wanted something fiercer. So we gave the bird fire-breathing snakes for hair, and put him in the same kind of kick-ass tank that Uncle Sam used to tear Saddam Hussein a new spider hole.

Second, you'll notice that the new design portrays the bird-tornado having six hands instead of two. That's an impressive 200% increase in the total number of hands compared to the previous Cyclone logo.

Third, the tank is running over Count Chocula because, let's be honest, the dude had it coming. I'm not saying I know anything about it. I'm just saying that when you run your mouth and don't repay your debts, accidents happen.

Fourth, the Cyclone bird-tornado-man is holding a moneybag. That's a bag full of cold, hard cash money. The kind every Cyclone alumnus and fan would use to "make it rain" and show his bitches a good time out on the town, yo.

Finally, on the tank is a humorous bumper sticker inviting people who have complaints about the bird-tornado's driving to call a fictitious telephone number, "1-800 eat shit." This sticker was included because that's how Iowa State rolls. If you don't like how we Cyclones drive our tanks, you can eat shit.

And that goes for you, too, Count Chocula.