Up Next From the FIFA Funhouse: A Game of Thirds?

Share All sharing options for: Up Next From the FIFA Funhouse: A Game of Thirds?

The FIFA corruption scandal rolls on, and it's all playing out as predicted. By virtue of stepping down from his posts at FIFA and CONCACAF, Jack Warner gets to remain "innocent", while Mohammed bin Hammam, who made the mistake of crossing FIFA President Sepp Blatter, looks like he's going to pay the price. Information is conveniently leaking from the direction of FIFA, and it's suggesting that bin Hammam's going to have a lot to answer for.

Just to recap, here's what's going to happen: bin Hammam will get found guilty by the FIFA inquiry, and this will get trumpeted by Blatter that he's cleaned up the game and why don't we all move on and HEY LOOK AT THE SHINY NEW SOCCER BALL OVER THERE

And to show just how seriously Blatter takes corruption, here's a picture of him on a recent visit with Africa's nicest and fairest man, Robert Mugabe: 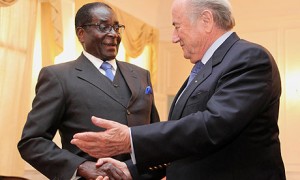 Where things could then potentially get interesting is if he decides to take the 2022 World Cup away from Qatar, since bin Hammam was the chairman of the successful bid behind it. One train of thought says that the stink of corruption might just be too much to bear, but that doesn't matter. What's more compelling for Blatter will be if he's got some favors to repay (such as to the American snitch, Chuck Blazer), or if there's some potential gain from a round of junkets from the bids and their nice token momentos and gifts.

That seems pretty unlikely, though, and FIFA will press on with figuring out how to shoehorn the World Cup into Qatar's hot summers and repressive culture. It's not all downside for the group, though: the latest talk is that should temperatures reach their normal level in Qatar (which probably still isn't as hot as the blacktop at the first BC tailgate of the season), games might be changed from two 45-minute halves to three 30-minute thirds. That seems like it really wouldn't make a hell of a lot of difference to the players, and would be a pretty fundamental change to the game but on the upside, it would make room for an additional ad break to sell.

While you're waiting for this silly summer season to blow over and for the major European leagues to kick off again, you might check out the Women's World Cup on ESPN. It's a pretty entertaining tournament, the US is doing well, and Sepp and his team doesn't seem to have managed to bungle it too badly (yet).