Now That The Ladies Have Your Attention...

Share All sharing options for: Now That The Ladies Have Your Attention... 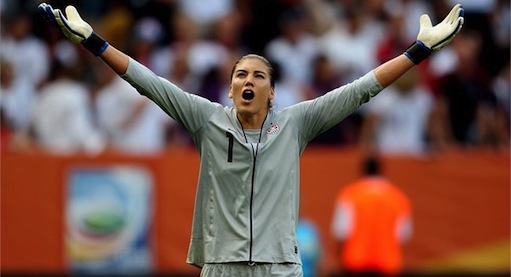 The US women's national soccer team beat Brazil in a World Cup quarterfinal on Sunday, in what was probably the most epic match in US soccer history, on par with last year's men's triumph over Algeria. The match encapsulated why I love this game: the drama of the last-gasp heroics, the fight back to overcome the opponents and the referee, the technical skill, and the emotional roller coaster. I defy anybody to watch that match from start to finish and not be moved in some way.

Of course, it also helped that the US won.

Things started very brightly, with Brazil conceding an own goal after just 2 minutes. The US held its lead for the rest of the half, despite some shaky midfield play, sloppy passing and Brazil continually beating US players to the ball. Early in the second half, the referee inserted herself into the narrative by allowing US midfielder Carli Lloyd to stay on the pitch, despite a blatant (and intentional) handball that should have seen her receive her second yellow card. The Brazilians' sense of injustice was sparked, but even they probably couldn't believe how the pendulum would swing back in their favor, highlighting how incompetence and bias are two completely separate things.

The pivotal moment of the match came in the 66th minute. Marta, the women's player of the year for the last five years, broke into the US box, and defender Rachel Buehler went shoulder-to-shoulder with her. Marta went down, and the ref gave a penalty. It was a contentious decision, and for me, didn't look like much of a foul, but I've seen softer ones given. But things got worse: the ref also decided it merited a straight red card for Buehler, reducing the US to 10 players.

Brazil's Cristiane stepped up to take the penalty kick, and US keeper Hope Solo, who one ESPN writer called "Brazil's kryptonite", made an outstanding save, diving to her left to paw the kick away. The damage appeared to have been contained -- but it was not to be. The ref again blew her whistle and ordered the penalty kick to be retaken. Since referees never have to explain themselves or their decisions (part of the reason any "respect" campaign is doomed to fail), it's not clear exactly why she did so. There was initial speculation that Solo moved off the goal line early, and FIFA gave this reason after the match, but that's not the case. A US player did enter the penalty box just before the kick was taken, which is an infringement, but one that is very rarely enforced. In any case, Marta took the rekick and slotted it home.

Despite the emotional blow, the US more than held its own with 10 women, and as the match progressed, its superior fitness showed as Brazil tired. The crowd also played a big role, as the injustice that had happened was as clear to them as to those of us watching at home. Their support for the US rose in volume and intensity, while they booed and whistled Marta every time she touched the ball, or went down with a feigned injury.

The US The game went into 30 minutes of extra time, and Marta again popped up 2 minutes in to score on a pretty fantastic finish that underlines her ability. But one problem: the player who made the cross for Marta was offside when she got the ball. 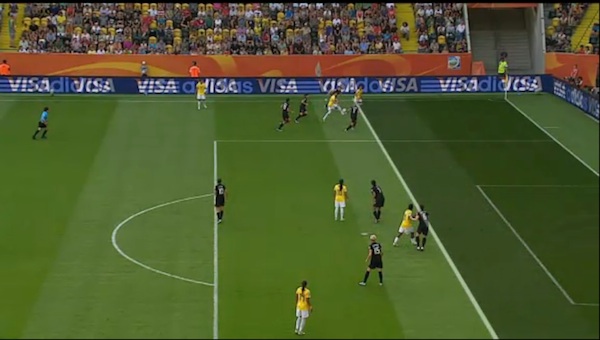 This went unnoticed, or ignored, by the assistant referee, and the goal stood. The skill of the Brazilians -- and Marta in particular -- aligned with the referee appeared to be too much for the US women to overcome. After they took the lead, Brazil's players turned their attention to time-wasting. While diving and faking injury is something that's much more common in the men's game than in the women's, the Brazilians showed they've been paying attention to their male counterparts.

Witness central defender Erika, who was taken off on a stretcher near the end of the match, after lying prone on the pitch for a couple of minutes: 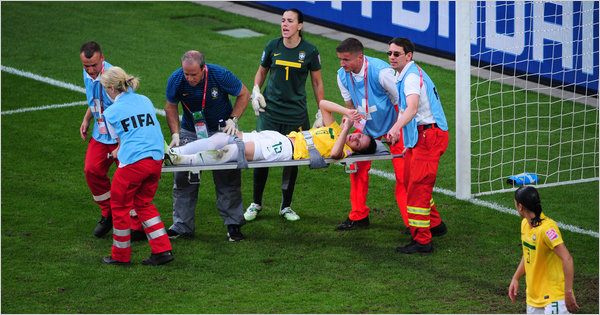 I'm not sure what sort of stretchers they use in Germany, but I want to get one, because apparently they're magic. As soon as the stretcher crossed the goal line, Erika miraculously recovered, and tried to get back on the pitch. What made this game particularly special for me was the karmic payback this ruse received: the ref added on 3 minutes of injury time because of the antics, and two minutes in:

This was the last gasp of the last gasp, a smash-and-grab job of epic proportions. Megan Rapinoe, on the left wing, had wasted a lot of balls since coming on as a sub, while forward Abby Wambach had come in for some criticism because of her slow scoring start to the World Cup. But soccer is a fickle game, capable of changing everything in a single moment, and the two combined to take advantage. After this goal, it was clear the US would come out on top, despite the coin-toss nature of penalty shootouts. Brazil would be beaten, thanks to the deeply held American belief that nothing is insurmountable, that we control our own destiny.

The antics continued in the shootout: Brazil's goalkeeper came off her line early on every single US kick. She stopped Shannon Boxx's first attempt, but the veteran coolly slotted home the retake. Her cheating was irrelevant on the four other kicks as the US proved unstoppable. The win was assured after Solo again stopped a Brazilian penalty, saving the kick from Daiane -- the scorer of the own goal in the second minute -- and giving the remaining US penalty takers an undeniable boost in confidence.

Hope Solo wants you to jump on the bandwagon:

You don't want to disappoint her, do you? Watch her and her teammates destroy some cheese-eating surrender monkeys at 11am central today on ESPN and ESPN3.com.

I know Sailor is in.

Except for those Brazilian bitches RT hopesolo Go ahead, jump on the bandwagon and let's do this together. One Nation, One World, One Team.less than a minute ago via TweetDeck