Share All sharing options for: Hardball Time in Texas 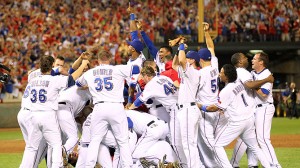 Time is short, but I wanted to put in a few quick words before first pitch in the Texas/Tampa ALDS. Since there's a beer vendor that desperately needs my attention, I'll leave most of the data points to others and just tell you what I think. I'll also be checking in with posts after the games.

By now, you may be aware that the Texas Rangers are a trendy pick to win the World Series. One of these days, I'll be able to read something like that and not recall Pete Incaviglia lighting farts in the clubhouse or Charlie Hough getting ready for a start by leisurely working his way through a pack of Tareyton 100s. Still not quite there yet.

As a general rule, post-season picks are inherently unwise propositions since they're based largely on what you saw over the summer. Regular season baseball lends itself to forecasting. You have meaningful sample sizes to work with. Not so in the post-season. Understand this: baseball is played from April to August. The September game (que desperation stage left) that you saw over the last couple of weeks is a hybrid. And then there's the October game. This, boys and girls, is American fucking hardball.

Baseball and hardball are two fundamentally different games. Success with the former guarantees you nothing with the latter. Examples from the "wild card era" (since 1995): (a) the team finishing the regular season with the best record has won the World Series only three times; and (b) the team with (or tied for) the best record lost in either the LDS or LCS 12 times.

Baseball is about accumulating, surviving and grinding. Division titles are won by steadily overtaking the field. Conservatism is rewarded. Safeguard your outs. Avoid the big mistake. It's like the gradual but undeniable force of water.

Hardball is played with your ass on fire while tethered by dental floss to the outer edge of your physical envelope. There's nothing gradual about it. Everything is consequential. Aggression is a bigger part of the game by an order of magnitude. So is luck. Both combined make it much harder to predict, but a hell of a lot more fun to watch.

When you look at the field of eight clubs, the trick is to separate the accumulators from the hardballers. General rule: accumulators don't fare well in October. Ask Billy Beane. Better yet, ask Joe Torre. The 1996-1999 Yankees were hardballers. The 2002-2008 Yankees? Classic accumulators.

Lest you think otherwise, the distinction I draw between baseball and hardball isn't a thinly-disguised middle-finger to the abacus jockeys. Far from it. You need advanced metrics to help you tease out who the hardballers are. Why and how are are certain teams successful? How many ways can somebody beat you? Although there are good arguments against it, I will indulge in smaller, late-season sample sizes in certain situations to get a feel for a team's post-season chances. In the Rangers' case, I think September was huge because Texas kept kicking ass even after clinching the division. Hell, Wash tried resting everybody and then the bench players got hot. Eventually, the Rangers decided to go hammer down for the 2 seed and as a result come into the post-season as the hottest team in the game (winners of 9 of the last 10, 16 of the last 20 and 22 of the last 30).

For my money, the 2011 Rangers are hardballers right down the line. Why? Because Texas is the deepest, most complete team in the tournament that can literally beat you any which way. It's the only team in the AL that ranks at or near the top in several key power, speed, baserunning and defensive metrics. It's impossible to understate how much that means to a pitching staff. Look at it this way. Starting pitching was--or is--supposedly the weakest link on the club. Yet the Rangers' starting rotation ranks at or near the top of the AL in several metrics, including xFIP (2nd, 3.82), SIERA (1st, 3.71) and cumulative WAR (2nd, 19.8). And for the last month of the season, the Rangers had the best starting pitching in baseball, with the rotation going 15-4 with the highest strikeout rate (23.6%) and 2nd lowest SIERA (3.21).

Losing the Clifton Phifer Lee sweepstakes hurt. No doubt about it. But the Rangers are a better team than they were this time last year in part because Derek "Dutch Oven" Holland, Matt Harrison and Alexi Ogando matured quickly enough to win 43 games between them. Those guys get a lot of credit for that, but ask any one of them and they'll tell you that pitching behind a lineup that's prison raping the rest of the American League and throwing the leather tends to take the pressure off a tad.

Something else that helps: the back end of the Ranger bullpen is fathoms deep and dirtier than a bag of assholes. The Koji Uehara and Mike Adams deals triggered a complete reformation of the Texas pen from an Achilles heel to a weapon that can turn a game into a 5 or 6-inning affair. It lit a fire under Neftali Feliz and enabled Wash to adopt a more reasonable deployment strategy for Darren Oliver. And adding Alexi Ogando to the mix makes the pen just flat out sick.

So, do I believe that the Texas Rangers can win the World Series? Hell yes. But here's the thing about hardball. In about 20 minutes, none of this will mean a damn thing. Buckle up.