Share All sharing options for: Texas vs Baylor Football Preview 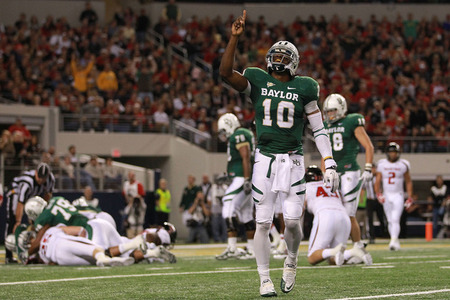 First, make sure you read this excellent discussion between our friend Peter Bean over at BON and Mark Moore of SB Nation's new Baylor blog Our Daily Bears.

Like Peter, I've had an unhealthy love of Robert Griffin since I first became aware of him as a junior at Copperas Cove high school, the torture of that unrequited fascination compounded as I realized he was heading to Baylor and not Texas. Makes sense. Copperas Cove was like an hour away. We couldn't be expected to scout him. Why would Texas recruit an elite dual threat, Olympic level track athlete who throws an amazing deep ball, graduated in the Top 5% of his high school class, and has the competitive instincts of a honey badger? RGIII is the ideal college QB and though the Andrew Lucks of the world project beautifully to the NFL game, Griffin is a far more dangerous player at the college level for his ability to extend the play and negate the best laid plans of mice and men.

Baylor averages 576 yards per game, 7.4 yards per play, and 43.1 points per game. Those are SILLY NUMBERS, more or less incomprehensible, existing in some alternate realm of college football offense. Conversely, we get excited if Case McCoy completes a four yard stop route.

RGIII is the straw that stirs the Baptist's Shirley Temple, but Baylor's OL recruiting classes have also panned out nicely, they have outstanding WR threats on the edge, and Ganaway is a quality RB who exploits undermanned fronts and the defense's overreaction to RGIII. Briles is a creative play-caller and he's distilled college offense down to a few simple components: an elite mobile QB who can erase protection issues with his feet, a vertical game that forces teams to keep safeties deep, a screen game that exploits the former and creates easy yardage, and use of zone read and simple running plays to keep execution levels high across the board. Baylor is a great example of a team that does a few simple things in concert so effectively that defending their offense becomes an amusing game of overcompensation and guesswork (see Iowa State playing Baylor with 7 DBs and allowing nearly 400 yards rushing or OU's safeties continuing to bite on RGIII ball fakes leading to multiple 50+ yard passes), eventually resulting in a barrage of 80 yard TD passes and a humiliated defensive coordinator.

We're the best defense they've seen to date, but if you're expecting to shut them down, you'll need to seriously redefine what success looks like in this game. If Baylor's offense has a weakness, it's that they can bog down in the red zone and they're primarily a big play offense - witness their 45% 3rd down conversion rate. The downside of that reality is they're just as likely to convert 3rd and 15 as they are 3rd and 6. For us, field goals are victories.

Were Griffin at forty other FBS programs, he'd be the landslide winner of the Heisman Trophy, but he has my vote whatever the efficacy of Baylor's PR imprint. His passing statistics look like he's been playing the Fiji Intramural B team every week: 72.6% completion percentage, 334 yards per game, a 34-5 TD/INT ratio. Beyond that, he's also rushed for a ho-hum 600+ yards and 7 more touchdowns. Griffin's primary evolution is that he now uses his feet to buy time in the pocket and you'll see him pull up at the LOS on a scramble with green grass in front of him to scan one more time for an open WR running a vertical. The touch on his deep ball is exquisite and though his arm is plenty strong, it's more about his ability to lead people, put air under the ball, and drop it where the WR doesn't have to break stride. He also has nice touch on shorter balls and has a knack for placing the ball where the receiver can do something with it. He's more or less the perfect college QB and tough as nails to boot.

We've proven pretty adept at dealing with all of those things, particularly #1 and #3. However, the Bears are a different bear from what we've seen. Kendall Wright is their best guy (95-1406-12), but they've got three others fully capable of hurting you in Sampson, Reese, and Williams (these three combine for 20 TDs). All four are deep threats and Baylor loves to run four verticals, roll Griffin out, and let him pick which 70 yard touchdown pass he'd prefer. Or he'll run it for 10 if it's not there. That puts just a tad bit of pressure on your defense. Williams is the closest thing to a big body and Sampson and Reese are both smaller guys. Though Wright is an average sized guy, he has long arms, great ball skills, and will take the ball away from bigger athletes.

I mentioned last week that we have the only secondary in the league with 4 legit cover guys in our nickel package and that's something Baylor hasn't seen to date. They've made a living exploiting their #3 guy against another team's crappy #3, but we don't drop off in coverage until you get to Scott/Gideon. As tempting as it is to man up and challenge Baylor, taking your eyes off of Griffin is suicide. For that reason, I expect a heavy sprinkling of zone with some man under concepts. It's also tempting to assign Vaccaro to mirror Griffin (I don't think a LB can handle him), but I'd prefer we do it with Adrian Phillips to allow Vaccaro to work his slot magic and gang up on the run.

We'll spend the entire game in nickel and dime if we can get away with it without being punished by Ganaway.

For the last three or four years, Baylor has quietly recruited a number of quality OL and now they're all grown up. They go 330-315-320-330-300. They're not the fleetest afoot, but they wear on you and they're a lot to handle when blocking for a 240 pound running back when you're loaded up with DBs to contest Baylor's passing game. I particularly like RT Ivory Wade, Baylor's most athletic OL. They squeeze down hard inside to prevent quick pressure on Griffin and generally count on RGIII to bail them out on free outside blitzers. OL is a development heavy position and Baylor has done the work we've neglected.

Ganaway is a good RB, but his big numbers are very much a creation of RGIII, solid OL play, and huge outside passing threats. See Randle at Oklahoma State. Every back in the Big 12 fantasizes about the green this cat sees on every running play. Nonetheless, he's productive, he's capable of running away from you despite his 240 pound frame, and he's a load to handle when you're running out 5-6 DBs. If we're going to pick our poison, I expect it will be Ganaway. At least between the 20s.

This will be brief. Baylor's defense is really poor. It's really about what we do in this game rather than what they do. If we operate at severe retardation levels in the basic passing game and our OL plays with estrogen patches, we will not only lose, but we will be humiliated. If we have some basic QBing presence, we can drop 30-40 on them and win.

They're allowing 6.2 yards per play, 37 points per game (and Baylor's offense doesn't turn it over so that's on them), and they can be murdered by any team with some semblance of balance and the ability to punish overplay. The best way to describe them is that they "receive" your offense. It's very much bend but don't break, but they forget the part about not breaking. They inflict very few negative plays behind the LOS, they don't really turn people over, and they have trouble getting off of the field on 3rd down (47% conversion). Other than that, they're the fucking '86 Giants.

Encouragingly, Baylor's defense - like Tech and KU - is undersized on the front. Specifically on the edges where they go 230 and 250 at DE and play a base nickel behind them. They're actually not bad inside (I like their DTs fine), so it's best to hit the edges off tackle. Hello, Luke P in the jumbo set.

Hicks and Holl, their two safeties, suck out loud and the rest of the secondary is OK, though prone to coverage busts. They're solid inside and their LBs will play inside the tackles effectively. The key is bullying them on the edge, getting leverage outside, and hitting a play or two over the top whether by hook or by crook.

Baylor's special teams are nothing special. Bad field goal kicking, below average in all phases of the return game, typically lose the game of hidden yards against a quality opponent. We need to win here decisively.

If we get some QB play, expect an enjoyable game. If not, make your reservations for San Diego.