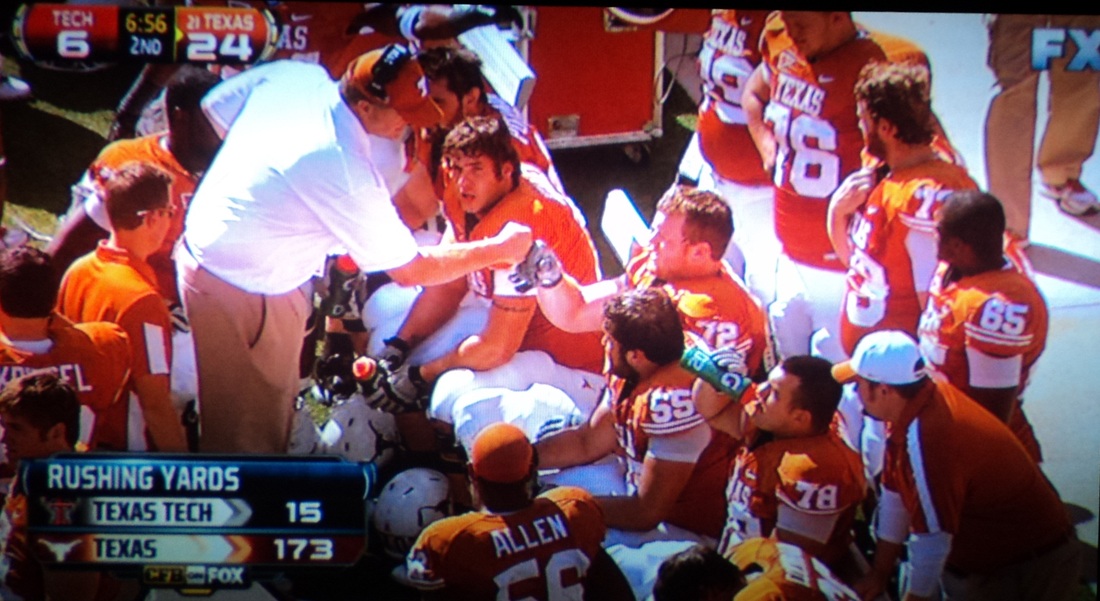 Searels has us back on track and honoring all of my pet OL theories.

Quality. This OL class breaks tendency to take 2 guys per year that won't challenge the offensive staff's GPS. Or for any playing time. It also eschews the Let's Panic And Take An Imbalanced Giant Class of Beef Every Three Years model. For some reason fans love "Classes of Beef" though they're mostly evidence of failed recruiting and the large majority of the guys don't pan. We're now taking 3-5 guys per year, every year. Finally, an OL plan that harnesses 1980's spreadsheet technology!

If your OTs aren't physical freaks, they're not good enough. That's where the game is now. All three of our OT signees are physical freaks. That doesn't mean they'll pan - it just means that they possess the requisite physical attributes. I don't want a gutty overachiever playing tackle for me. I want a mesomorphic 6-7 chunky power forward with sweet feet who can jump rope like Apollo Creed, touch their palms to the ground with their legs straight, and can sit deep like a sumo reading the funny papers while shooing DEs away from the QB like King Kong swatting bi-planes.

Guards are commodities. And every year they're overvalued in the rankings. Who is generally the better athlete - your #4 DT or your starting OG? Right. Peruse the NFL salary disparities between guard and tackle. Markets clarify where evaluators obfuscate. We've historically over-signed the position (and our current roster reflects it), but this year we didn't. We only took Riser. And our DL takes foreshadow position switches. That's how you do it.

OL that don't produce are equivalent to NCAA scholarship sanctions. They can't switch positions, or help with special teams, and they don't like to transfer. A WR who doesn't get the ball heads to another school vowing to "show various motherfuckers who will not throw the ball to my person." Other players discover that they're Lamarr Houston. Failed OL are gentle souls who like belonging to the team. Content to redshirt, eat, clog toilets with fecal pythons, and stick around for five years while true freshmen pass them on the depth chart. Next to QB, OL is the most unforgiving scholarship offer you'll make. If three of your unproductive OL are caught pistol whipping a drug dealer, celebrate.

Raw. Want the savvy OL football camp veteran who has been getting elite coaching and lifting weights since 7th grade at a big program high school or the former basketball player whose mama didn't let him play football until he was 15, who can reverse dunk, and has only lifted for two years? We know who the more dominant high school player is. Who's the better college junior?

Props to Stacey Searels for convincing Mack to take an out-of-state JUCO and props to the young man for having his social and academic ducks in a row. The Donald is currently 6-5, 308 and he looks classy. Weight in his ass instead of his belly and currently 12 pounds under his sophomore playing weight. Early returns on his conditioning workouts are encouraging. Hawkins has two years of JUCO starting experience and the NJCAA 1st Team All-American's film reveals a kid with solid feet, natural aggression, and run blocking ability. I'm more agnostic on his pass protection abilities - more from lack of film and an inability to gauge his competition appropriately than any perceived lack of talent. There's every reason to believe that he can be an early contributor. He didn't give up a sack over two years of collegiate play and that counts for something.

He has a compact set up and does a nice job preventing inside moves. Most of his film shows a DE taking a wide looping angle since the bull rush isn't there and Hawkins taking them on a ride past the QB. There he sticks with it and doesn't allow the come-back sack. But having a good base against a JUCO DE and having a good base against Ronnell Lewis is a different animal.

When run blocking, he doesn't deliver a big lick out of his initial get-off heads up (scroll down to see what I'm talking about), but he brings his feet, locks up, and then the defender gets rag dolled. Look at how he finishes his blocks. It's pretty clear to me that he knows that so long as he doesn't get matadored or lose balance, he can physically handle what's across from him, so he plays the long game in run blocking. Make contact, bring feet, get a fit, and walk 'em back. On zone plays where he's asked to reach, he needs to shorten his stride so that linebackers don't run under him.

I see a JUCO kid who took care of academic business in the non-qualifier wasteland of Mississippi, showed up in shape and is putting out in offseason, and consistently shows a good motor on his film. Taken in combination, those traits suggest a fire in his belly, but I may be guilty of inferring too much. Spring will tell us a lot. Okafor and Jeffcoat are good indicators of where he is developmentally as a pass protector - expect some early trauma and hopefully a quick learning curve.

Other than Ash, there is no player I'm more anxious to learn about this Spring than Donald Hawkins. As a fan base, we have so little experience projecting JUCO performance I'm tempted to solicit input from K-State fans.

He's an easy evaluation - the classic long, raw OT with athletic ability who is two or three years of weights and maturation away from having a solid enough base to prevent more compact players from getting under his pads and bull rushing him. Once he gets the confidence of a solid base and a solid set-up, his height, feet, and wingspan will make outside moves a trip to nowhere. He's dominant enough to have some bad habits as a pass protector and not get punished for it, but balance, athleticism, and flexibility are all there.

When run blocking, Estelle does a nice job in space - particularly when pulling - shows excellent mobility and lateral movement for a kid his size, and is coordinated enough to acquire defenders on the move. When heads up, he doesn't get low enough and tends to rely on superior physical ability, exerting the exact amount of energy required to get the job done, but not always punishing to the whistle. Very common stuff and highly teachable. Estelle started playing football as a high school sophomore - the surface isn't even close to being scratched. It's all there. He just has to want it and we have to teach it. If he becomes a superstar, we can also enjoy the fact that 6-5, 260 pound DEs will have to tell their teammates that they got their ass kicked by Estelle. Coached by a Stacey. Boy Named Sue Theory Lives!

Ideally, I'd like to redshirt him, but our depth chart isn't very ideal.

Our third physical freak checks in at 6-6, 320. That's after weighing 270 last summer. According to Mack, it's good weight. Scary.

So everything I wrote about Kennedy Estelle? Well, ditto. Watch the first highlight. When a kid that big can move like that, he's a take. Like Estelle, Hughes is actually more dominating in space than straight up at this point in his career - a function of being a young, tall kid who is still building the core strength and power to fire out with a flat back and active feet and drive a defender without standing up and relying on envelopment. When the criticisms of an OL are "needs more time in the weight room" and "still learning the position", you're right where you want to be. Criticisms like "marginal athlete with T-Rex arms", "as inflexible as Liberty University's student code", and "feet like Tom Dempsey" are not where you'd like to be.

Hughes is the son of retired military and the frequency with which "father was a career master sergeant" and athletic success are linked can't be coincidental. MUST STOP FROM MENTIONING RGIII. As an early enrollee, he's already well ahead of the game from a conditioning and acclimation standpoint. If there's one area where Estelle and Hughes differ slightly, it's that Hughes seems to have discovered his inner nasty much earlier. He's a punishing player and clearly enjoys unloading on people, even when he's 20 yards from the ball. Hughes needs a redshirt and I'm eager to check back in on him in 2013-2014.

Now that I've downplayed guards, you may not be as impressed that he was universally considered the best one in the state, but that's exactly the guard we want. Interestingly, DeSoto also played him at tackle though he doesn't project there collegiately. He's 6-3, 290 with long arms, does a nice job of keeping low pads, plays with energy and effort, and consistently dominates his opponents. He is no relation to comedian Paul Reiser, which is also excellent news.

Domination on highlight film is expected, but Riser's desire to finish every play with his assignment driven into the dirt thirty five yards downfield is unusual for a physically superior OL. Generally, big guys buy into conservation of energy theory. That speaks to attitude and motor and that determines OL blue chips panning more than any other intangible attribute. His get-off is good for a big guy and he's got low pads and solid technique - he's not just getting by on superior physical attributes. If I have any critique (or caution, really) of Riser, it's that despite having an athletic frame and carrying good weight, he's a naturally thick kid around the hips and an easy gainer who could lose some of that motor if he lets himself get too heavy. Other than that, it's not hard to imagine him as a multi-year starter here.

There's an assumption that Riser will play early, but we're actually deep at guard and I'd love to see us get back in the habit of redshirting OL. If he proves so precocious that he has to play, then so be it.

I had a lot to say about this excellent OL haul and for good reason. I'm excited about what these four players mean for our program in terms of athleticism, upside, and as an insight into our staff's overall direction and understanding of the landscape of college football.

This group is a direct glimpse into Searels' head. Past the Smokey And The Bandit memorabalia, the baby back rib song from Chili's, and Hank Williams Jr collector's plates.

Top to bottom, this is as promising a group of OL as we've had at Texas.

I welcome your thoughts, comments, criticisms.