Head coach Mack Brown said the dinner was a reward for the team's hard play and good sportsmanship in Dallas.

"The kids played real hard," reported Coach Brown. "And the coaches coached real hard. It's not easy to finish second only to Oklahoma, but we went out there and did just that on Saturday. Now we'll go back to work and try to fix some things but sometimes you have to stop and celebrate what you did right."

An invitation to the Texas football team's celebratory pizza party, which players reported was "totally awesome".

This year marks the Longhorns' third consecutive second-place finish in their annual rivalry game against the University of Oklahoma, and the ninth in Mack Brown's tenure at Texas. While the game's winning team is awarded the prized Golden Hat trophy, each Longhorn player instead receives a small, football-themed trophy with his name and "2ND PLACE" inscribed on it.

According to Coach Brown, the consolation prizes are just as nice as the Golden Hat.

"That shiny hat sure is pretty. There's no doubt about that," said Brown, before taking a big bite of cheese pizza. "But, there's only one Golden Hat and the whole first-place team has to share it. When you win second place in a big game, everybody on the team gets a trophy."

"Besides," continued Brown, "our trophies have this cool little football guy on 'em and they even put your name on it and everything."

Each member of the Texas team received a trophy like this in recognition of the Longhorns' 63-21 second-place finish against Oklahoma.

After enjoying their pizza, the players were treated to cake, ice cream, and the presentation of individual awards. Coach Brown handed out framed certificates for the "Hardest Hit" (awarded to the Longhorn player who was hit the hardest by an Oklahoma player), "Explosive Play" (awarded to the Longhorn offensive lineman who was most spectacularly blown up by an OU blitzer), and the "Showing up is Half the Battle Award" (given to the Longhorn defender who consistently got the closest to touchdown-bound Sooners). Each player was then awarded 15 Chuck E. Cheese tokens in a small envelope with an encouraging note from their head coach: "Congrats on trying your best and playing real hard against Oklahoma! Your friend, Coach Brown."

In a touching show of mutual appreciation, the Longhorn players also presented Coach Brown with a gift: a tee shirt bearing the slogan "World's Greatest Coach."

Despite the loss, the Longhorns can take solace in the fact that the only team to outscore them on Saturday is the best team in the country, #7 Oklahoma (4-1). Indeed, Saturday's game marks the second straight week that Texas has placed second to the nation's best team. Last week, the Longhorns finished runner-up to the top team in America, #15 West Virginia (5-1). Unfortunately for the Longhorns, the schedule does not get any easier from here. Texas will host possibly the country's top team, unranked Baylor (3-2), this weekend before finishing off the season against five more teams that could very well be the best team in America.

"You have to give our future opponents credit," commented Brown, in between sips from a juice box. "Hats off to their players for going out there in a few weeks and making the plays they will need to make to beat us."

"But don't count us out just yet," continued Brown. "If we go out there and play our style of football, the coaches are confident we'll finish no worse than second place in each of our remaining games."

History bears out Coach Brown's bravado. Since 2010, the Longhorn football team has placed no lower than second in 31 straight football games, taking first prize in 17 of those contests. The Longhorn team earned Big 12 Conference Participation ribbons in both 2010 and 2011. Indeed, in Coach Brown's fourteen seasons as head coach, his Longhorn teams have won a Big 12 Participant award an impressive 12 times. And with the way Brown has the Longhorns playing this season, a 13th green ribbon is all but guaranteed. 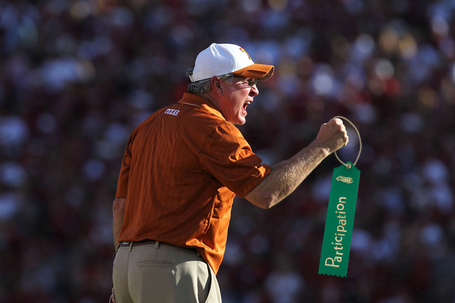 Yet despite his history of award-winning success, Longhorn fans have often expressed frustration with Brown's teams. During Saturday's 63-21 runner-up performance, rowdy Texas supporters booed from the stands and departed the Cotton Bowl early. That kind of negative reaction spoils the fun learning experience of participating in team sports, says Coach Brown.

"Football's not all about winning and losing," said Brown, eagerly accepting a snack-sized box of raisins from team mom Sally Brown. "It's about learning things like sportsmanship and teamwork and life skills. The final score isn't everything. That's why, every year at the Big XII coaches' meeting, we ask the league to stop keeping score during football games."

According to Brown, the Big XII's controversial practice of keeping track of the number of points each team scores during a game and displaying the respective totals for all to see encourages poor fan behavior.

"When you put the score up there on that big jumbotron, it just makes all the Texas fans angry," said Brown, carefully surveying a glass case full of cheap carnival prizes. "They yell mean things. It sends the wrong message to the kids, who are just out there to have fun and get some exercise."

"Whoa," continued a wide-eyed Brown. "Do you see those awesome Spongebob sunglasses? I wanna win that!"

Despite the fans' negative reaction during and after Saturday's game, the university's Athletic Department remains happy with Coach Brown's performance.

"The University of Texas demands only one thing from its coaches: bring home the hardware," said Texas Athletic Director Deloss Dodds, standing in the university's impressive trophy room. "And whether it's runner-up ribbons, consolation prizes, or honorable mention awards, Mack Brown brings home the hardware season after season."

In the end, Coach Brown insists that it's important for a man in his position to turn a deaf ear to fan criticism.

"You can't please everybody," said Coach Brown, before leaping into the ball pit to join in some good-natured horseplay with a group of celebrating Longhorns. "We know we're doing our job the best we can. WEEEEEEEEeeeeee!!!!"