Why Texas Won't Play The Aggies In The Cotton Bowl

“The trouble ain't that there is too many fools, but that the lightning ain't distributed right.” - Mark Twain

Share All sharing options for: Why Texas Won't Play The Aggies In The Cotton Bowl

A restoration of rivalry, a collision of bad feelings and passion, an appealing internecine death match. Everyone, we're told, wants this.

Granted, we're getting ahead of ourselves, since it's not clear that this Texas team will win 2 of its last 3 even after our defensive coordinator took a Geometry extension at Austin Community College, and Texas A&M is no sure thing if Johnny Manziel comes out publicly against Reconstruction when his receivers drop too many balls against Missouri, but let's assume things fall the way they should.

I'm not excited by the prospect of playing Texas A&M in the Cotton Bowl.

The reasons are straightforward enough:

Even as they experience a window of on-field success - A&M is 7-2, and exultant; Texas is 7-2, and bitterly angry - the Aggie-Longhorn expectational divorce encapsulated in awesome symmetry - but the Aggies still yearn for the restoration of an old rivalry. Just once. Why? To fully validate their new identity. That's the comforting constancy that Texas provides and Aggies still can't wean themselves away from. Texas serves as their measure of all things. Aggies will protest that characterization. But it's true. It explains the psychology of their traditions, their passion for opposing Texas.

Anything an Aggie is for as it relates to addressing their complex is something Longhorns should oppose. That's simple science. Outside of that narrow realm, Aggies are perfectly good people and can be dealt with more or less like any other bonded landscaper. 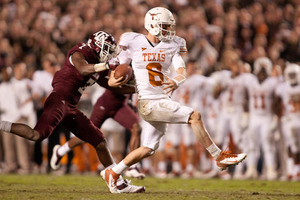 Despite a series record of 76-37-5 favoring the Longhorns and a final instance of eternal scoreboard on Aggie home turf when Case McCoy derp'd strode decisively on the way to Justin Tucker's game-winning kick, Texas is down and A&M is up. Relatively, of course. A Texas win does nothing for Longhorn Fan beyond the satisfaction of a bowl win and a good snicker at the TexAgs.com hysteria post-game; an A&M victory would be more important than any of the other big games they've never won combined. You'd also see a slew of children named Manziel and Hump It! and QueerHornz over the next decade. Can't have it.

Smart poker, trade theory, and common sense, tell you that when the comparative stakes are massively unequal, find another participative structure. We'll call it the Alamo Bowl.

3. Insecure people are fun to wind up. 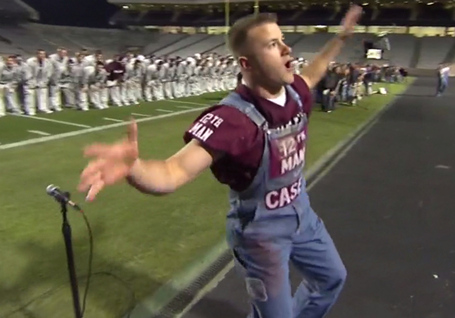 I don't mean the nerdy, meek insecure. That's cruelty. I mean the Ben Affleck character in Dazed and Confused. The blustery insecure: credit card millionaires, blowhards, the perpetually self-unaware who won't shut up. Those insecure deserve to be constantly, thoroughly mocked. Until they show up to your post office with an AR-15 and a homemade explosive in a Mello Yello bottle. Then I politely ask to read their literature.

What's the ultimate wind-up? Denial of existence. Total negation. Refusal to engage. Don't believe me? Do it tonight with your significant other. You'll be stabbed in the temple with a corn cob holder. Why does a little boy with a crush on a little girl push her down on the playground after she ignores him? Aggies know.

Whether you give money to the homeless or not is a personal choice. I give mostly based on my whim and their calorie-burn expenditure to entertain and amuse me with an ironic sign. Make that hopelessness dance, I say! However, you should never give to an aggressive beggar. It rewards bad behavior and creates criminality. Furthermore, if an aggressive beggar is young, able-bodied, and sporting a $2000 tat sleeve, I often tell them that they should fist their own butt-holes. Consequently, I'm at war with 40% of Portland.

Texas A&M is an aggressive emotional panhandler. They're able-bodied, if not able-minded. They're fully capable of finding new rivalry work instead of sponging off of their lazy, familiar, emotional sidewalk. Don't reward that. Tough love is real love.

A mewling, whining, annoying bitch reveling in the spotlight, confusing attention with approbation, spectacle with approval. A rural Snooki, but without the big cans and easy morals.

I don't mean the leaving itself. Every program should seek their best alignment within the college sports money machine. Leaving the Big 12 for the SEC made plenty of sense economically, culturally, and as means to establish a distinct Aggie identity rather than perpetually serve as a flailing "anti-Texas."

So make the move on that basis. On the positives.

Instead, they blamed Texas. They caused this. They forced us. Boo hoo. How, exactly? By being more popular, successful, and coveted. Aside from the Aggies ignoring a basic understanding of free markets and consumer choice, this departing behavior, amusingly, reinforced what Texas fans want to believe: that Aggies are marionettes dancing on the strings of Longhorn whim. They weren't emotionally capable of making a positive move based on the actual positives. They had to conjure up the old Burnt Orange bugbear thwarting them, a mythology around which the dimmest Maroon can rally.

Thou shalt not reward bitch behavior.

God said that. In one of his books. An early one.