Would YOU like a new head coach for Christmas? We have the perfect gift. He comes with 1 national championship ring, 2 conference titles, 3 iPods of crunk tunes, 4 veteran PR assistants, and a $5 million contract. Get him now before it becomes $5.5 million next week!

I haven't experienced Van Envy since watching The A Team as a 10 year-old. Not until I came across this bad boy while walking down South Congress last week. And it's all I want for Christmas. 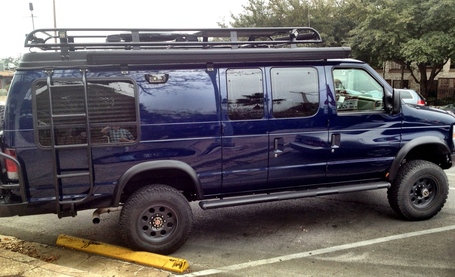 I left the owner a business card asking if I may purchase it. If you are the owner of this fine vehicular specimen, please post your contact info and the offer price in the comments below. Barter would be acceptable as well, as we have many affiliates that broker stolen goods with fiat currencies. I already ordered a custom license plate that reads PUSSYRAKER, clearly exceeding the 6 digit/letter maximum because this rolling hunk of badassery already breaks at least 20 laws (i.e., gatling gun mounted to moonroof, interior formaldehyde fogger).

On New Year's Eve, I would accelerate this Pleasurevan down Trinity all the way to ramming speed and crash it into Bellmont while blaring Savatage's Hall of the Mountain King. The only ID they will later find in the wreckage is that of James Van Derbeek. Pamphlets will be ejected from a bumper mounted t-shirt launcher reading:

We shall not be Billittled by this athletic department any longer! Here's to unhappy endings and 'splosive beginnings in 2013. Happy Holidays from your friends at Barking Carnival.

In the meantime, here are some of the gifts on our editors' wish lists this holiday season. Our friends at Good Bull Hunting, 143 minutes northeast of the state capitol, were also nice enough to share their givings and receivings as well. If there is any justice left in the world, they should give us Johnny Football's Heisman so we can re-gift it to Vince Young.

In the spirit of the season, I'd like to offer Mack Brown the gifts of the magi.

Gold. As in a gold watch for Mack Brown, for his years of faithful service! Thanks, old buddy. Keep in touch.

Frankinscense. Or as I prefer to call it in the Mary Shelley tradition: Frankensense - the ability to know when one is a dead man walking.

Myrrh. Let the middle consonants linger, as if you were Dave Attell saying something illicit, and the word will make you laugh. It's also the exact sound I make after Christmas dinner when I put on my sweat pants. MYRRRRRRRRH.

I would like a tastefully-done silicone reproduction of Jeff Madden's breasts. I'm not a boob man, per se. But I mean... wow. I haven't felt that confused by a set of hooters since the tender age of 11, when I first saw Nell Carter bouncing around, swinging a towel on the opening credits for Gimme a Break! "Do I like this? I seem to. But, at the same time, it disgusts and troubles me." Also, I would like the complete Gimme a Break! DVD box set.

What are you wishing for this Christmas Eve?