Is Texas Preparing for a New Offensive Identity?

Share All sharing options for: Is Texas Preparing for a New Offensive Identity?

It's been interesting to see the mix of comments this week related to Tyrone Swoopes verbal commitment. Obviously all of us are spitballing at this stage about what Swoopes might be capable of at the next level but I admit to being surprised that some folks see this as a sign that the Texas offense is taking a new direction. 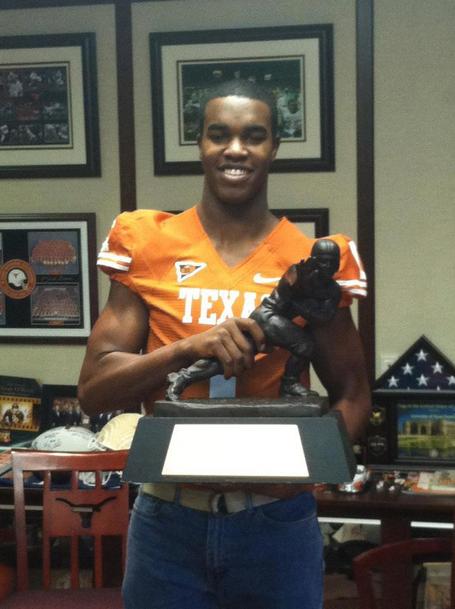 Let's be clear, the recruitment of a dual threat quarterback is not a radical departure from the current trajectory of the Longhorn Offense. If Swoopes becomes the eventual signal caller it wouldn't mean a change in identity, just a shift in emphasis. A runner of Swoopes caliber would lead to modified play calling but not a fundamental change in the offense because Harsin already has a plurality of concepts in his offense designed to exploit a dual threat at QB.

When Texas is under center, Harsin wants to apply a primary strong side pressure with the power play and inside zone. Both of these plays give the offensive line advantages playside on the defense: the power play through angles and an extra blocker, inside zone through combo blocks at the point of attack. Layered behind this are outside concepts to the strongside: pin n pull outside zone, stretch, sweeps (jet and toss) and wide receiver screens. On a macro level these concepts are designed to punish the defense for trying to play inside out on the strongside.

There are also weakside concepts which are designed to punish overaggressive backside defenders who are fast flowing strong side or who are giving up backside containment through their alignment.

By threatening the entire front, the offense is able to target the defense based on their coverage. This is because the coverage determines where and how the secondary is able to support the front against the run. The effect that an elite QB running threat would have on these sets is that it would create more stress to the backside of the formation because of additional care required to contain the bootleg. And what that means is that cutbacks on the inside zone and the power play become more likely and the slice zone becomes a real problem because it's specifically designed to take advantage of a defensive end who staying too far outside.

In the Shotgun
From the shotgun, the emphasis in the running game shifts. The same core concepts: power and zone are featured through the QB read against a reduced number of defenders in the box.

This is complemented with the quick passing game to create inside/outside pressure and play action to create hi/low pressure on the edges of the box.

While the traditional screen game, shuttle passes, the draw, and rollouts punish the pass rush and enhance the protections in the shotgun.

The implications of a dangerous athlete at QB here are layered. Obviously, a runner at QB enhances the read plays because it opens up the explosive play when the QB keeps the ball. In turn, this allows for much more steady production from the running backs and it also opens up the middle of the field in the passing game against over committed linebackers. The other obvious effect is that it extends passing plays and forces the defense to account for the QB scramble and QB draw.

The Pistol
In the Pistol, the inside zone and power again take a central role.

Although it may not be immediately obvious, the pistol actually aids the inside running game because the back gets the ball sooner and deeper. At the same time, the read game that is central to the shotgun is also ideal for the pistol.

And added to this is the possibility for the motion sweeps (jet, fly, rocket, and flanker) and the quick game for immediate outside pressure. As well as and the availability of slower developing option plays off of an inside zone or power fake as well as the pin n pull concepts that complement the inside zone and power so well.

In short, pretty much the full complement of Harsin's running concepts are readily available in the pistol and the formation fits our trajectory perfectly with a running threat at QB (Ash and perhaps eventually Swoopes). Even with Brewer or McCoy in the game, you are still going to see the quarterback used as a running threat. That isn't to say that we are going to become primarily a pistol team… under Harsin there is no defining offensive formation but I do think it will become an even more significant part of our offense going forward because of the strong philosophical fits with our intent on offense.

There's a ton more that could be said on the subject, but I just wanted to respond to the notion that a dual threat quarterback would somehow imply that we are changing our identity. It certainly doesn't. In part because we are already utilizing a ton of dual threat concepts with David Ash and more fundamentally because Harsin's offense is concept driven. The plays and formations emphasized in any given year or in any particular gameplan are just a means to an end. "Spread offense" or "Pro-style offense" are both inadequate and incorrect because that's not how he builds his ideas. Regardless of how athletic the quarterback, Harsin primarily wants a guy who can recognize what he's seeing from the defense and make good decisions. As long as they can cultivate a few usable skills our issue will never be that we aren't utilizing the "right" offense under Harsin because he isn't relying on his signal caller to fill in the conceptual gaps of the offense.