First, read this helpful interview from Peter Bean with SB Nation's Cincy blogger Matt Opper from Down The Drive. You should also peruse ReggieBall's statistical breakdown of Cincinnati's shot selection. It'll give you a great sense of the Bearcats.

By the way, you're probably wondering what a Bearcat is. It's not a bear, it's not a cat - it's a Binturong. 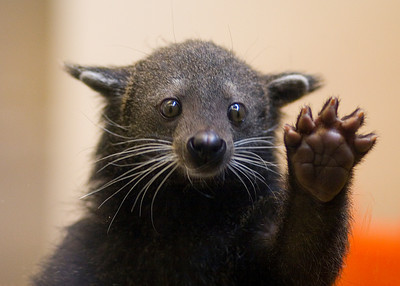 At first blush, you probably think this animal is an insect or some sort of mollusk, but it's a mammal.

Although they are classified as carnivores, they primarily eat fruit. In that sense, they're very much like Jack Lalane.

The learnings I've gleaned from Cincinnati are as follows:

What Texas needs to do:
Predictions
I can envision a number of scenarios in which Texas wins this game (J'Onions McTournament sees the bright lights and goes off, Kabongo grows up and neuters the Bearcat pressure, Sheldon and Chappy turn in strong supporting cast performances as Cincy goes cold from 3), but I think the greatest likelihood is an an ugly, hard-fought game played in the 60s or low 70s in which both teams shoot around 40%, Texas wins the rebounding battle, our turnovers gift Cincy with easy baskets and extra possessions, and Cincy's 9 point lead holds up to a furious 2nd half Texas rally that leaves us two points shy.
We're very young and have a decent chance of reeling from their initial pressure in a tournament setting. Similarly, I'm haunted by what I saw from us last year against Arizona when simple trapping and ball pressure puzzled us for an entire half of play.
Call it 69-67, Bearcats. What's your prediction?