Greetings, college football fan. Naturally, you want my perspective, because I live in the Capital of the World. 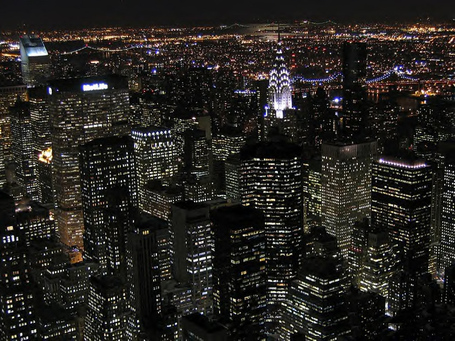 New York City, of course. I know about the college football America (mostly from documentaries: Paradise Lost, Bowling For Columbine etc) but you know little of my world, though I live in the most important city ever.

New York City is the only real place left. It's like this indescribable jazz. Where else can you just walk down the street, into a pizzeria, and get a slice? And then eat it, watching the people. And then, eh. I'm done with this. Napkin the face. Schmutz. Paper plate into trash. Back to the street. Just walking. I mean - where else can you do that? Eat food. And then walk. Riffing. This city is like no other. Miles Davis, right? Kind of Blue.

Yes, there are other cities in America - is there still America? - I don't know, I don't watch Fox News or CBS - but New York is the only true city. Ever. I mean, maybe, Constantinople. But they didn't have deli.

The main thing about New York City is that every experience here is more authentic than yours.

I mean, where else can you go and get INDIAN FOOD? In your neighborhood! Only in New York. Exotic foods like: curry, naan, samosa, and pakora. Sometimes served in a traditional buffet. You won't find that in Indianapolis. Despite the name. I've never been there. But I just know it's awful and very sincere and everyone there is wrong.

And don't get me started on tapas. You probably don't even know what that is. It's Spanish. I'll stop. You eat your Happy Meal, OK? I really don't need this today. My therapist says: "James - the problem is that you're just too much; sometimes you're too hard on yourself when others don't measure up." She's right.

We have museums, the arts. I was recently profoundly affected by a woman who staged a perverse nativity scene in a bodega in Tribeca where she pelted every third patron with pigeon carcasses. And then there's the American Museum of Natural History, but that's for tourists.

I don't drive. Driving is this very fascist way of movement. Invading space. I walk or take the train. It keeps you grounded. Not like Los Angeles, where everyone is hiding behind their walls and pretensions. On the way to my adult tetherball league, I'll run into people who aren't WASPs and have never heard of Middlebury. It's exciting. I mean, where else can you do that? Just as David Brenner's cutting edge stand-up comedy promised.

You can get an immaculate rye whiskey for only $14 at my local dive. It's called Hanratty's Umm, Whatever and it's full of artists and intellectuals saying and doing very original, artisanal things. Real salt-of-the-earth working people. If you know the pass word, they'll let you in the backgammon parlor. Gives you a real glimpse of The Old New York.

Yes, New York is rough. I do cardio krav three times a week. Field hockey players from Barnard will accidentally bump you. Or a crazed Dominican will curse you when you tell him you already have a wristwatch. These things harden you like steel. This isn't a soft place like Chicago, Dallas, or Atlanta.

As for college football, I think this is probably Syracuse's year, but watch out for Notre Dame. I don't know. Is college football really even a thing anymore? It all feels very 1996. What are these exploited gladiators trying to prove to their fathers, anyway?