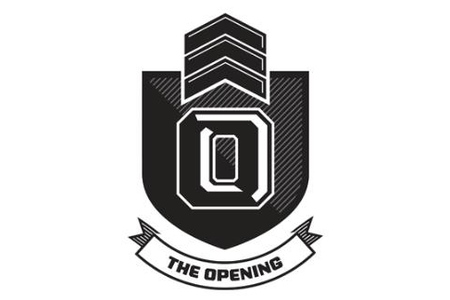 I'll update when I can.

Gorgeous day in Beaverton, Oregon here at the Nike Campus. Highs expected in the low 80s with a mild breeze, so we should get a good look at the QBs in perfect throwing conditions.

A'Shawn Robinson will work at DT. He's a very solid 305. He'll be coached by former LSU standout Chuck Wiley and Kenard Lang (The U) in drills.

Jake Raulerson is strictly playing OL. He'll get coached up by Montrae Holland and LeCharles Bentley.

I'll also have an eye on S Marcel Harris today.

And yes, the team names are pretty sweet.

7 on 7 warmups and shorts and shell lineman drills. Game speed for the big fellas and they did their best to make the drills somewhat realistic.

Tyrone Swoopes is still dipping the oar down in the water on his set-ups. Needs to pull the ball-up. Getting a shotgun snap (hence no steps in drop back) and an absence of pass rush only reinforces that bad habit. It elongates his delivery and makes him place the ball instead of let it fly. Missed a few throws as a result. He has throwing ability, but he needs tutelage. It's why they're called prospects. Great frame. Legit 6-4+ and he can eventually carry an athletic 235.

Ricky Seals-Jones is the real deal athletically. Had a fantastic extended catch on a 35 yard jump ball. I'll share the pic later. Huge, strong hands. Long strider who can shift direction mid-step, making the defender underestimate the separation he's about to gain, forcing the bad angle. I think some of the 24-7 guys are big on him as a DE, but he's a ball catcher by ability and disposition. IMO, over thinking his projectable physical specs and not looking at actual football skill. Impressive athlete. His 40 time is completely meaningless once you see him in person.

His twin is Alabama TE prospect OJ Howard. 6-6, 230 with solid hands. Not a typical Bama type of TE and possibly a transformative player for them at that position.

Eldridge Massington looks the part. Not particularly refined as a route runner, but certainly fits the physical type.

Will focus on Warrick and Oliver this afternoon. Oliver has good buzz centered around his understanding of the game.

Forget the fact that they were in shorts and shells. They went at it. Some solid battles and even a fight or two.

A'Shawn Robinson is one of the most impressive linemen at the camp. Competitive nature of the drills brought out his want-to. May have the most natural strength of anyone on the field. I'm certainly a believer. 6-4ish, 305 and carries little bad weight. Suh sought out A'shawn after the drills and shared a word. Naturally, I eavesdropped. Suh really like his natural ability, but encouraged him to grow his repertoire, which currently stands at bull rush. That was sufficient to rag doll Jake Raulerson in a run blocking drill and to win against the other OL trying to pass block him, but it'll have diminishing returns at the next level when he's facing physical comps. He's a legitimate prospect on both sides of the ball, but I still like his upside best at OL. Justin Blalock type baseline athleticism. I do not type those words lightly.

Spoke to Jake Raulerson's OL coach at length after the drills. Nick started on OL for UCLA and saw a lot of himself in Raulerson. Had several sharp, astute observations. Jake played up and down the OL and we both agreed that C/G is his best home. Did well against guys his size (Jason Hatcher from KY), but A'Shawn Robinson demonstrated the difference between 255 and 305 on a run blocking drill. Raulerson is technically very proficient and he'll run through a brick wall if a coach asks, which has endeared him to all of the coaches here. As I advise with all OL, worry about what he is at age 21, not 17. Stop the DE talk.

Loved John Lopez, OL from CA. Great initial punch on a big body. Will learn to move his feet. Also impressed by Cameron Hunt's technical proficiency and the natural ability of dark horse camp attendee Ira Denson from FL. Ira has fantastic frame, was soaking up learning like a sponge, very coachable.

This camp has done little to dissuade my view that Texas should be all over Southern California when we choose to look OOS. Cali churns out good kids and the competitive recruiting environment is comparatively anemic compared to SEC country.

Swoopes threw the game winning TD as time expired after connecting with A&M commit Laquvionte Gonzalez on a deep prayer on the previous snap. Swoopes is a slow starter and just as the sideline buzz started to turn a bit negative, he turned it on and delivered strikes on 3 of his last 4 passes (the throw to Gonzalez was of "let's see what happens variety"). Nice anticipation demonstrated on a couple of throws. He has tools. Just very raw. Like his demeanor. Other than his game winner in the back middle of the end zone which he threw on time through coverage, his best throw was a pretty post route where he placed the ball perfectly between coverage. Just when people start to calcify opinion on Swoopes, he responds.

My favorite QB so far is Cooper Bateman. Very natural ball thrower and mechanically sound. Accurate. Gets out it with good velocity, but it's where it needs to be.

Ricky Seals-Jones saw a good bit of intermediate work. They're playing him outside. I think the Calvin Johnson comps that are thrown about are off.

Focused on Warrick and Oliver in 7 on 7s.

Jacorey Warrick is probably a true 5-10/5-11. Long arms. Good quickness, but nothing exceptional. Really nice kid. Didn't see much action in the game I watched, which was a bit of a defensive struggle. Very lean frame, but I think he'll be respond to the weight room. He doesn't stand out in this environment. Chatted briefly. Good kid.

Jake Oliver looks like he does on film. Good routes and a clever understanding of how to work towards the QB, or away from zone coverage, and when to settle in the gap. He's not going to threaten a defense running straight down the field, but he suckered DBs twice on stop and go and out and up routes, one of them good for a nice completion. Showed his straight speed limitations when he tried to run a straight go route against Cameron Burrows, a 6-0, 200 pound corner from Ohio who couldn't be muscled. Ball was slightly under thrown and picked. Oliver's main strength is a strong body and athleticism good enough to allow him to work to find the spots in a coverage scheme, not consistent exploitation of a man straight up. Unless it's a small corner. The more organized the football and the better the weapons flanking Oliver, the more effective he'll be.

RS-J continues to impress. Had one play that was essentially a screen where he pivoted on the defender, shook him, took the open sideline and ran for 20. Not very easy to do against a zone defense. I thought he was the best pure athlete in the state before coming out here and I haven't seen anything to dissuade that opinion.

Talked to Tyrone Swoopes for a few minutes. Such a good, humble kid. Really makes me pull for him on a personal level.

Pulling for Swoopes cursed him. In his second game of the day, Tyrone threw four interceptions in four possessions, two to Florida safety Marcel Harris (who is still interested in Texas). Three of the interceptions were on Swoopes, one on USC WR commit Eldridge Massington, who didn't come back for the ball and fight for possession with enough effort. Really tough outing for Swoopes against a stacked group of DBs. Bad decision-making across the board. His receiver group didn't help much as they weren't running productive routes and each guy is a bit of a one trick pony at this stage in their development. Nevertheless, Tyrone didn't value the ball and certainly did not impress with his decision-making.

Speaking of Marcel Harris, I love this kid even more seeing him in person. Given his size and disposition, I can fully understand all of the LB talk, but he has deceptive range for an athlete that thick and powerful. He covers a lot of grass. And has really good hands. He can definitely make plays on the ball as two interceptions and a beautiful pass break up on a post route attest. The teams going against him just started avoiding him altogether. He's a player. Get him on the field at hybrid LB, Cover 2 safety, or playing the OU Roy Williams position and let him wreak havoc. I'm impressed he looked good in a format that doesn't play to his forte.

USC QB commit Max Browne was extremely impressive. Skinny, long kid with a big arm and a ton of accuracy and anticipation. He threw guys open all day and threaded the needle on a number of tosses. Whoever was coaching his team also did a nice job of understanding the plays and schemes that work within the format. Kiffin landed a player.

Talked at length with Florida St. RB commit Ryan Green's father. Great guy. Talked about their experience with Notre Dame, Auburn, FSU and other schools and showed me a basketball clip of his 5-11, 195 pound son dunking off of two feet on another kid in a basketball game. The family was impressed by Brian Kelly, but Notre Dame's distance and bleak weather were a bit much. I'll follow Ryan's career with interest.

Somewhat amused at the number of fathers from Florida and throughout SEC country that all expressed dismay that they never heard from Texas. Whether their protestations were sincere or not (and I think it varied), Texas is definitely perceived as a coveted scholarship - an important scalp on the recruiting pole. It was a good reminder that we should be looking out of state aggressively when we can't find the players we need at a certain position. Texans can have a parochial perspective with respect to state talent levels across the board - sometimes rightfully - but attending something like The Opening is a good check on that assumption.