As a small child, I will always remember how my mother possessed this spontaneous creative ability to come up with any other name for a penis except for penis. For instance, "Ded, stop touching your hootus!". Or, "Ded, put your ying yang away!" (while urinating off front porch of Tascosa Country Club on Easter Sunday). I have explained this ability to my wife, who finds it to be a highly laughable skill.

While on the family vacation in Creede this summer, my wife was finally able to catch the Jan in action. I had just finished up showering and headed back to our bedroom where I find my mom and wife in a whispering conversation. I notice my mother is holding a small jar of clear fingernail polish. As I am spotted, the Jan asks, "Ded, your nephew thinks he has a chigger on his woobie.......". At which point, I interrupt her question with an definitive, "No, hell no. They've made after school specials about that shit." I glance at my wife, who through a half-grin and confused face is still quizzically murmuring, "Woobie? Woobie? Woobie?"

This is my 4th year covering the SOTU on the Oklahoma State Cowboys and the recycled Okie jokes are running thin. At this point, I wish I could channel such creativity for new material, but we'll just have to delve into this anyway.

In retrospect, I was extremely accurate in my 2008 assessment that Mike Gundy had the Cowboy program headed in the right direction. Gundy directed OSU to Big 12 title town and has proven to be one of the better evaluators of talent in the league.

OC Todd Monken faces a bigger task this season without Brandon Weeden, Justin Blackmon and Josh Cooper to help install the Air Raid offense. I wouldn't count on failure here. Monken is a highly respected QB coach and, between he and Gundy, I'm sure they'll have everyone on the same page. I can't imagine any scenario in which production won't be down, though. Monken will most likely rely on RB Joseph Randle more to aid fresh meat at the signal caller position.

The Cowboys have made a 180 in terms of direction at the QB position transitioning from a staunch Obama supporter of increased social security benefits to a young Tea Party extremist lobbying for job growth. Gundy rewarded true freshman Wes Lunt for his views and was named the starter after spring practice. This should be interesting, and while short term austerity measures will most likely result in four to five losses in 2012, the upside could have the Cowboys back in the title hunt two to three years down the road.

Joseph Randle is the top back in the Big 12 and a surefire lock for all conference honors. Were Gundy to pull off some magic and reach nine or ten wins, Randle is most likely your darkhorse candidate for offensive MVP. Jeremy Smith adds some thunder to the Cowboy rushing attack with a stockier, more physical build.

Not only is OSU rebuilding at the QB position, but gone are leading receivers Justin Blackmon and Josh Cooper as well as Hubert Anyiam. They've got an electric talent, Josh Stewart, that I've seen on numerous occasions in high school at Denton Guyer. He'll be a household name in the Big 12 before his career is finished. Look for Stewart to generate the big plays in the Cowboy offense this year. Tracy Moore is a huge, physical target, who should be adept at moving the chains and serving as a serious red zone threat. Isaiah Anderson is a Wichita Falls product with speed to burn and will finally get his chance for talent to match production. Blake Jackson (6'3", 240 lbs) was arguably the top TE prospect from the JUCO ranks and has the potential to compete for newcomer of the year. Charlie Moore is another big receiver, who had a monster spring game and might end up beating out Anderson for a spot on the outside.

OG Lane Taylor is the bell cow of the bunch and a preseason all conference pick. A bunch of guys that no one has ever heard of round out the group. However, Joe Wickline always seems to piece together a solid unit with good fundamentals. I don't expect them to be a dominant outfit or a weakness either. Lots of new faces, but they're not having to rely on young guys. Starting LT Michael Bowie was dismissed from the team and is scheduled to be replaced by Devin Davis.

DC Bill Young is the bend-but-don't-break sensei of college football. The Cowboys gave up a boatload of yards last season, but led the country in turnover margin and generally limited conference opponents to the high 20s in points. Plenty sufficient for Weeden and Blackmon. However, they may not get the help of the opponent's offense being forced into one dimension by the 2nd quarter in 2012.

JUCO transfer Calvin Barnett was a highly rated prospect out of high school and appears to have the inside track at one of the DT spots. Christian Littlehead had a big offseason hitting a Super Trifecta. Unfortunately, it wasn't the kind that wins you money at the Cimarron Casino, but the rare case of three offseason arrests and the almost impossible outcome of disciplinary action by Gundy. Gary Patterson was unimpressed. From what I gather, there were two incidents involving firewater and a third with peyote. I blame it on the bullshit agency beef. They'll be fine as Anthony Rogers, James Castleman and Daffodil Collins are solid options.

Cooper Bassett and Nigel Nicholas are listed in the two deep at the same DE position. I suspect you'll see them both on the field together as I certainly consider them as 2 of the best 4 options in this unit. Nicholas came on strong over the second half of last season and Bassett is extremely versatile. Ryan Robinson and Tyler Johnson figure in at the other end spot, but don't sleep on redshirt freshman Jimmy Bean. Cool name and a heck of a player coming out of the Guyer program. Overall, there may not be NFL talent in this group, but high motor guys they are.

The Cowboys remind me of a Bill Young Kansas defense in a lot of ways. Like starting two mega-size white guys at LB for instance. However, instead of being a liability, they are competitive, disciplined and physical and translate much better in the passing game than you would think. This defines Caleb Lavey and Alex Elkins. While OLB Shaun Lewis may not be a prototypical NFL player, he's a prototypical Big 12 spread player: Strong against the run. Can't be blocked by a WR on hitch screens. Ideal athleticism for open field plays against the screen game. Good enough coverage skills to keep on the field for all downs. Extremely physical. Creates turnovers. He's now what a lot of folks hope their blue chip prospect will be at the position and deserves a preseason All-Conference spot.

CB is the strength of this particular Cowboy team. CB Brodrick Brown will latch onto your #1 receiver's woobie like a Sepik River pacu fish. Great competitor. As far as NFL potential, Brown's counterpart Justin Gilbert is the guy I like best on either side of the ball. Gilbert's got elite size and athleticism and is also a dynamite kick returner. I suspect he's going to test out well when he shows up in Indy. Former 4-star prospect Daytawion Lowe will man one safety spot. The other position still seems up for grabs between Lavocheya Cooper and Shamiel Gray. It's obvious what Young looks for when scouting potential DBs -- completely fucked up first names. I won't be surprised if experienced backup CB Andrae May gets some time in the safety rotation. I'm rooting for Lowe and Cooper just to hear Dave Lapham struggle with pronunciation.

It all sounds pretty 8-4ish to me unless Gundy has some more tricks tucked away in that visor. 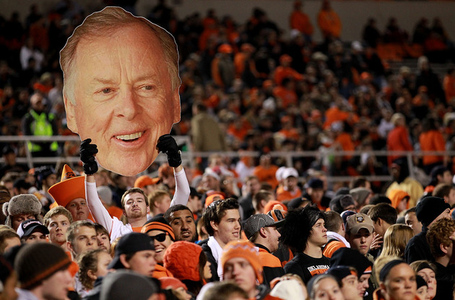 Check out the most excellent SB Nation blog Cowboys Ride For Free for more info on the 2012 Pokes and be sure to holler at the prolific @pokelahoma on the Twits.

2011 Cowboy State of the Union