Share All sharing options for: 2012 Kansas Football Preview: Jayhawk State of the Union

DOES THIS LOOK LIKE THE FACE OF A WINNER TO YOU?

The Kansas Jayhawks are coming off a 2011 season where they did not win a game from September 11th onward. They fired their second year head coach Turner Gill after a putrid two year record of 5-19, including an appalling 1-16 record in Big XII play that find Rock Chalk fans fondly recalling the days of Mark Mangino's winning chins, who they could not run (waddle? or power walk cardiac arrestically? Choose your own adventure) out of town fast enough after nearly unsurpassed success, much to the chagrin of bloggers everywhere. But you can't accuse the KU athletic department of not applying clear and concise logic to the hiring process.

Here's how it went down.

AD / Dr. Sheahon Zenger: Alright, gentleman. Let's convene the 2011 KU football coach hiring committee meeting. I would like to make this a thorough process. I have done some research into previous hiring committee successes. We have hired two coaches since 1953 that ended their tenure with winning records here at KU. Jack Mitchell, hired in 1958, was 44-42-5 and Mark Mangino, hired in 2002, was 49-48. Since I hired Turner Gill and should probably be on some sort of probation for the foreseeable future, I am soliciting input from some of you that have been around the program longer. So, what can you tell me about Jack Mitchell? Also, we have finger sandwiches en route. The pimento cheese is literally the magnum opus of the Kansas culinary fraternity.

Zenger: Come on, people. I can't resurrect this (literally) once proud program on my own. I am crowd sourcing this. I need some feedback.

KU Booster #1: Now might be a good time to point out that Jack Mitchell is dead and he has not coached football in any of our lifetimes.

Zenger: Ok, good stuff. Not particularly helpful. But I like where this is going. Of the other available hires with Coach Mitchell's attributes, whom would you choose?

Zenger: No, you morbid son of a biscuit! What would we do with a dead head coach? Although it has worked for those mother scratchers in Manhattan (forms hands into steeple and ponders the Neo-Victorian window treatments while trying to convey deep thought of the Grey Wizard's unlikely success)

Never mind, I don't think any of the good ones were cryogenically frozen. Not to mention that the sense of the Mack Abry that a reincarnated Landry or Lombardi would bring might not be good for the cheerleaders pep or the season ticket holders buying . . . uhh, well season tickets.

Number 2: I think he meant macabre.

Number 1: Do we even have season ticket holders?

Zenger: [coughs artificially twice] Okayyy, moving on. Mangino, that rapscallion, tell me some more about him.

Number 2: He was morbidly obese and the players hated his ass. He did put the Rock Chalk back in our footballing Jayhawks, however.

Number 1: He also won some, but not too many, football games.

Number 2: We had to teach the porters the military art of camouflage so there would be nacho cheese left for game day.

Number 2: He hid fatback between chins two and three.

Number 1: As chins go, he was the bizarro Bob Stoops.

Number 1: Agreed. In retrospect, the Head Coach In Digestion tag was probably a mistake.

Zenger: I think you have something there Number 1. Good thoughts also, Number 2. I think that this is something we can build on. A paradigm for success, as it were. I think there might be other coaches that fill these specific criteria. Certainly there are some in the vaunted Kansas high school ranks. I seem to recall a specific elephentine ornery cuss from Olathe . . .

Number 1: [cuts off fruitless diatribe] Well, Coach Boom is about to fire Charlie Weis, but you can't seriously . . .

Zenger: Yes! He is so fat his gunt defeated Lap Band head-to-head and even Bill Belichek thinks he lacks a winning personality.

Number 2: Well, to fill the DC spot we could hire Dave Campo to fulfill your dead guy criteria.

Zenger: Splendid suggestion, Number 2. Done and Done. I am hungry. The tuna on toast in the cafeteria is quite savory. Care to join me, gentlemen?

Number 2 to Number 1: We are sooooo REDACTED.

And that, ladies and gentlemen, is a nearly historically accurate account of Doc Zenger making one of the most completely selfless hiring decisions in college football history. Sheahon chose blog humor over his job, and he didn't even have to convert to Judaism. And I, for one, applaud him for it. Because when some galactically unfortunate student manager finds Weis napping pantsless with an MLT (where the mutton is nice and crisp) lodged between his FUPA and completely obscured (Gods be good) genitals, snaps a pic with his phone, and sends it directly to the blog of his choice we all win. We All win. Well, except all the Jayhawks.

On to the Analysises, or Life in the CFB Woods

The good news about the Charlie Weis hire is that he can't possibly be worse than Turner Gill. The bad news is that there is an entire ocean of suck between Gill and a satisfactory 5-7 record. Weis can be relied on for three things. Coach 72 oz Chuck Roll for Lunch can make wholly mediocre quarterbacks completely fool Mel Kiper, which is nice. So, thumbs sideways for the Dayne Crist Era. Charlie has ample talent on hand to implement his main defensive strategy, which can be best be described by the title of the short monograph he authored in Coaching Today, Fewest Plays Until Navy Scores on Me Again. Coach Karl White can also be counted on for a sheer volume of fumunda cheese to completely price Wisconsin out of the market and cause them to secede to join their funny talking brothers in Far Canuckistan. So, there's that.

At quarterback, Kansas has Crist for one year to transition to . . . who the hell knows? This depth chart shows the back up as something called Turner Baty, which sounds like a bad TNT Tuesday night legal drama. Evidently, due to a criminally negligent shortage of squirt cheese, Weis ate Jake Heaps. Tough (snack) break for Heaps, whose college career has been blighted by residence in Provo and now a journey through the bowels of the Jayhawk program.

Crist will be throwing to hyperspeed midgets with no hands, Daymond Patterson and D.J. Beshears, with media guide listed heights of 5-8 and 5-9, and actual heights that preclude roller coaster enjoyment. It is good that Crist didn't spend his Notre Dame career air mailing Malcolm Floyd and that gargantuan white tight end who can't run. JaCorey Shepherd will join the Lilliputian first team to punish defenders with his height advantage at a media guide listed 5-11.

In an offense that will rely entirely on the line's ability to keep the cement-booted Crist upright with 4-6 seconds of pocket time to hit receivers down field in slow developing rout combinations, Kansas has a completely inadequate group of pass blockers for the task. Tanner Hawkinson will anchor at left tackle and he is the only lineman on the team who will even sniff the combine. Zlatnik and Marrongelli are changing positions on the interior again this season to prove their collective versatility and previous inadequacies. There are a couple of other guys to fill out the right side. KU will envy Texas offensive line depth, because their second unit is comprised entirely of redshirt freshman. Telling you who they are would take up time you don't have.

Crist's backfield mates lack experience and pedigree until James White comes back from a three game suspension for pulling the Corpulent Coaching Wunderkind's intravenous cream gravy tube from his fistula and ‘wheezing the juice.' Until that time, Marquis Jackson, Tony Pierson, and Brandon Bourbon will have to fill the void. The good news is they had great success in the spring game. The bad news is they played the spring game against the Jayhawk defense again this year. 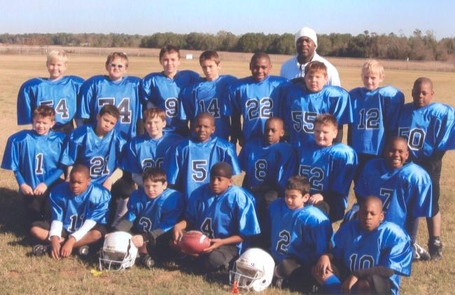 Sometimes you just have to let the numbers do the talking. First, pour yourself a cheap bourbon, zap it in the microwave for 30 seconds, and slam a searing hot shot of booze down your gullet while contemplating this:

119th in yards per carry

Note: There are 119 teams in the Football Bowl Subdivision.

Yowzah. The one thing this defense can really hang its hat on is its 116th rank in total rushing yards allowed. Opponents kept running into the endzone before they had a chance to really rack up the yards.

So, to sum up my statistical analysis of the defense, they suck the sweat off a dead Tijuana donkey's gonads. There are some guys that have transferred in from Notre Dame on some obscure voyage to play football in as many crappy Midwest towns as possible. This will not help in any tangible way. Edvard Munch's The Scream, also known as the mental image of Coach Weis sexing the dog out of misses Weis, should accurately describe game days in Lawrence this year. Optometrist's dream, imo.

Last season I exposed myself as a hopeless romantic when I wrote the following regarding the Jayhawk's chances:

There are no gimmes for a team that lost to North Dakota State University. But, I will give the Jayhawks McNeese (with reservation, they could get frisky), NIU, and . . . I can't make a cogent argument for why they would win a single Big Algebra game. Sorry, dudes.

But, I will bet on the come anyway and give the Kansas Jayhawks a dissatisfying yet consistent 3-9.

I managed to be both prescient and wrong in my prediction which is really hard to do. I am about to do it again. There are no gimmies on the schedule, but I think they sweep Rice, South Dakota State, and Northern Illinois. Thankfully Texas State and it's unstoppable power option isn't on the schedule. And while I can make no cogent argument for a single Big XII conference win, I say Jayhawks ruin two Saturdays for the opposition and finish 5-7. And in this situation, I can think of no worse possible outcome than instilling false hope in Lawrence. Charlie Weis is the dead cat (or hungry, hungry hippopotamus) bounce of college football.

It is already basketball season in Kansas, for the foreseeable future.

To find out why there is still some semblance of hope in Lawrence for KU Football in 2012, check out rockchalktalk.com