West Virginia's place in the football universe and its journey West is best understood in the interplay between two great American cultural archetypes: the Redneck and the Hillbilly. Redneckery is the dominant culture of college football's great powers, from the humid SEC to the mustached townies of Ohio State, across the flatlands of flyover country to the cults of central Pennsylvania; while The Hillbilly, the Redneck's shy, marginalized cousin, prefers his games indoors, on the hardwood, content to sit on the margins each Saturday. But one day, out shootin' for some food, West Virginny struck bubblin' tube! Texas TV. Network gold. Big 12, that is.

Most use the terms hillbilly and redneck interchangeably, but that's a mistake.

Hillbillies suffer from rock bottom self-esteem; the redneck an overabundance of self-regard. Hillbillies are wily, often even intelligent, but mostly ignorant of a world beyond Coon Lick Holler, and consequently believe that Rutgers is a tough road environment. The redneck is awesome in his basic inability to reason, but compensates by embracing, if not shaping, the world around him. Mostly through phoning sports call-in shows and forwarding chain letter e-mails. While the redneck adapts well to both rural and suburban environments, the hillbilly prefers the stillness of wooded poverty. Consequently, the enterprising redneck may be dumb, but he knows things. What I call "Okie skills." Things like how to win a dry wall bid, how to commit mail order fraud, or how to make a Wave Runner street legal.

The redneck's ability to overcome his natural incuriousness by seeking the world's riches instead of shunning them gives him a natural advantage over his less adaptive hillbilly cousin. The hillbilly knows this, is seized with fierce resentment, constantly frets over perceived slights, and spends his productive time submerged in the crick breathing through a hollowed reed to get the drop on a hated rival when he checks his muskrat snares.

But the hillbilly is the evolutionary progenitor of the redneck. And a bold hillbilly is a force to be reckoned with. I refer you to the exquisite Patrick Swayze/Liam Neeson vehicle, Next Of Kin. There's nothing that Chicago organized crime fears more than intricate backwoods snares and mountain lore, and there's nothing Big 12 defenses will fear more than Dana Holgorsen's creative mix of run-pass hybrid booby traps.

Every now and then, like Daniel Boone, a hillbilly leader throws some jerky in his pack and decides to set out over the ridge line to kick some ass. This proto-redneck is how this nation was won, how Billy Ray Cyrus made millions, and how West Virginia came to the Big 12. This hillbilly Archaeopteryx, this transitional form, combines the contradictory attributes of each caricature.

An autistic-hell raiser, a quarrelsome innovator, a co-ed ass slayer with a Kenny Powers wardrobe, possessing little respect for state laws regarding age of consent or BAC levels, and a strong likelihood of forcible removal from an Indian casino for pissing at the blackjack tables while yelling out,"A little something to warm your wigwams, you card-cheating savages!"

This is what happens when you name a boy Dana. Or Sue. 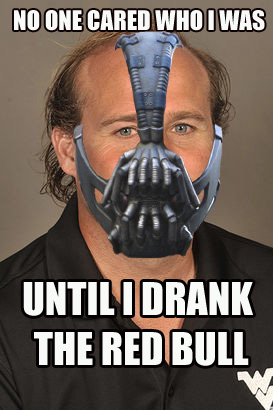 Dana Holgorsen. The man tasked with leading his buckskinned clan into the redneck flatlands - a bewildering empire of currency based economies, gated communities, jet skis, and fluoride rinses. Holgorsen has brought a hint of swagger to a fan base more comfortable cast as underdogs, and vigor to a region of the country most associated with providing mood shots in the Hunger Games and a GDP built on selling dream catchers.

West Virginia's football team historically comprises a volatile mix of overachieving Appalachians from iron smelting hamlets and outsourced mercenaries from Florida so stupid, late developing, and/or prone to criminality that even Florida schools said," No thanks." Corralling this volatile mix - a team that can get the shit kicked out of it by Syracuse and in turn, do the kicking to Clemson in a bowl game, is a challenge. Can this WVU squad drill OU in Morgantown? You betcha. And lose to Iowa State in Ames the following week? Sure will. Being a Mountaineer fan is VERY EXCITING.

WVU's 2012 defense has received such preseason votes of confidence as:

"...slightly less gay than a tastefully prepared picnic lunch in a bicycle basket."

"Playing on the WVU defense would be a marginal quality of life upgrade for a Burmese sex slave worker freed from a shipping container."

I'm not as optimistic as all of that.

West Virginia fans are excited to be transitioning from a 3-3-5 base concept to a more traditional 3-4 hybrid, but all I see is the mathematical certainty that a runner is 20% less prone to trip on a safety on his way to the end zone.

The West Virginia defensive line will be undermanned, struggled to stop the run against quality offenses last year, and all of the personnel that made them potent pass rushers are gone (1st round selection Bruce Irvin, DT Julian Miller). Their inability to rush the passer will be a greater issue than nutria in Pappy's whiskey mash, and in combination with 40+ passing attempts from the WVU offense, shouldn't work out well for them in the 4th quarter of tight ball games. DE Will Clarke is a monster specimen, but has, to date, has looked like Jethro and played like Ellie-Mae.

The West Virginia linebacker corps exists and has a ton of depth. Two of them returning starters. I could detail them, but it's an ensemble of mediocrity, like a Morgantown production of Hair.

The Mountaineer secondary lost their best cover corner in All-Big East performer Keith Tandy and fellow starting corner Eain Smith, and that means breaking in newbies Pat Miller and Brodrick Jenkins. Although WVU fans are suspicious of Darwin in general, safety Darwin Cook is a reliable returning starter and their next two best safeties are promising freshmen Karl Joseph and KJ Dillon. Secondary play and pass rush was a relative team strength for WVU last year, but now not so much. What league would that suck in? Oh. THIS ONE.

But let's not dwell on negatives. Because they are going to light some people up. 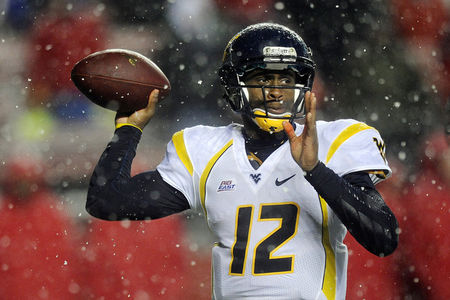 Offensively, WVU has the potential to work over any college defense, mostly because that's modern football when you have a very good QB, high level wide receivers, good schemes, and today's passing rules. That explosiveness makes West Virginia one of the most dangerous teams in the country given that the best defense for a well thrown ball to a wide receiver with a half step into a small window is yelling out "Miss it!"

However, the Mountaineers are also surprisingly prone to torpor and inconsistency. WVU fans attribute this to playing down to their level of competition, which explains a lot about Appalachian genetics. Expect at least one inferior Big 12 road team team to zone them, test their patience, and sucker them into an underachieving, turnover filled loss featuring Holgorsen chewing through his headset wire and receiving an electrical shock through his fillings that rewires his brain chemistry into believing he's a Komodo Dragon.

Geno Smith will be the best QB in the league (4,385 yards, 31-7 TD/INT, 65.8% completions) and as he goes, WVU will follow. Smith is sometimes mischaracterized as a dual threat, but he's actually a traditional spread QB with a good pocket feel, an average arm, but fantastic smarts, touch, and recognition. His second year in this offense can only bode well, despite an uptick in competition.

Holgorsen's passing offense forces defenses to go small, underman their front, and enable a running game. To his credit, he has exhibited the patience to run the ball when a team sells out against the pass, in contrast to his spiritual mentor Mike Leach. He'll do it with bruising Shawne Alston (97-416-12 TDs) and change-of-pace, feast-or-famine speedster Dustin Garrison (136-742-6 TDs).

The WVU receiving corps will be the league's best, after putting up Playstation numbers in 2011. Tavon Austin is a former RB who excels after the catch and was Smith's most reliable target with 101-1186-8 TDs last year, including a bowl game destruction of Clemson. Stedman Bailey is the most explosive player on WVU's team, runs outstanding vertical routes, and punished defenses to the tune of 72 catches for 1279 yards and 12 TDs. He also dated Oprah, but I may have him confused. A 17.8 per catch average with that much use is a pretty spectacular statistic. But wait, there's more....Ivan McCartney completes the trio with "only" 49 catches last year. This WR group is as loaded as a coal miner at 5:15. 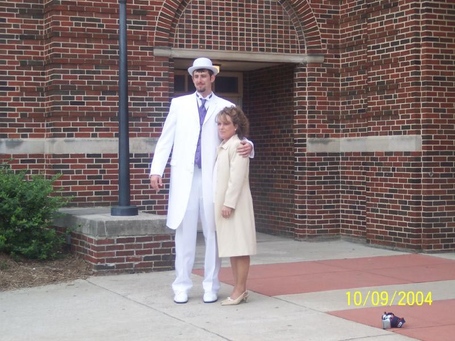 The WVU OL should be fine, partly because of their talent level and experience (they essentially return 4 players with significant starting experience), but mostly because Holgorsen's schemes require so little from the OL from a pure talent standpoint against the average opponent. If they can win battles with numbers in the running game and keep Geno Smith upright for 2.9 seconds, they've done their jobs. Allegedly, their center is Joe Madsen. Bullshit. West Virginia Center will always mean Pittsnoggle to me.

Overall, I'm happy to have West Virginia in our league because it's gorgeous country, their mascot looks like a 18th century serial rapist, a road trip to Morgantown next Fall means whitewater rafting and touring a Caucasian township, their head coach is Gene Wilder in Young Frankenstein, and we add another Texas opponent with a massive ingrained inferiority complex, which makes for consistently good internet. Honestly - what's not to like?

Welcome to the Big 12, Mountaineers. 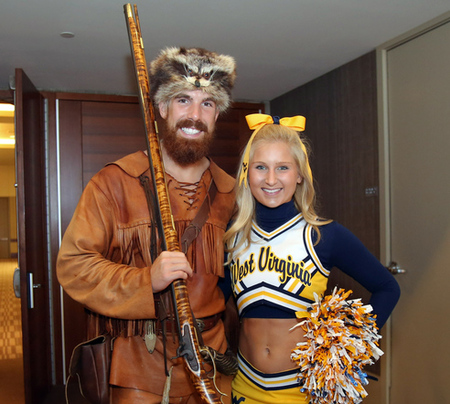 This cheerleader was later taxidermied and kept in Gran's quilt wardrobe.