A wizard is never late, Colin Klein. Nor is he early. He arrives precisely when he means to. - Bill Snyder

The first two chapters in the second installment of the Bill Snyder fantasy epic seemed to lack the conjurations and lyrium potions that were so prevalent during Snyder's first sojourn on the plains. Woe to you who doubt the Grey Wizard! Like all great epics, the 2009 and 2010 seasons were merely time for Snyder to gather his forces, be they man, beast or JUCO, as 2011 would be the year he finally released his stored mana upon the enemy legions of the Big 12.

Prior to the 2011 season, KSU was picked to finish 8th in the Big 12 by the pundits, and, honestly, it was hard to dispute this prediction when you looked at what the Wildcats were bringing to the table in a conference full of explosive offenses led by experienced quarterbacks. Quick inventory check from last year: a Caucasian dual-threat quarterback, a pair of fraternal transfers who brought more off-field drama than on-field production to their previous teams, skill positions manned by the cast-offs of the Trinity team. For the average college football coach, it would be the type of roster that causes night terrors and cold sweats. Bill Snyder takes rosters like that, throws it in the cauldron with a little cold toad blood and produces MAGIC!

By magic, I mean Snyder and his apprentices concocted a 10-3 season where they were 8-1 in games decided by 8 points or less. The 2011 Kansas State team was the pure embodiment of the notion of "taking what the other teams gives you." The Cats' offense exploded when it had to against A&M and Iowa State and rode the offensive ineptitude of the Longhorns all the way to victory when their own offense only produced 121 total yards. Naysayers will point to the +15 turnover margin, the five non-offensive TDs and other "unrepeatable" statistics as evidence that the 2011 KSU team wasn't really that good. The truth is statistics like those are the hallmark characteristics of well-coached, disciplined teams. Bill Snyder has been fielding similar teams since a Roosevelt was in the White House, and it's a fool's errand to confidently predict that it won't happen again. It's practically guaranteed that Snyder will play his black magi card in early December and pad those turnover stats a bit (obligatory Magic the Gathering reference). Enough 2011 discussion, for the year is 2012, and we are here to discuss the 2012 Powercats team.

The Powercats run the anti-Big 12 offense. Yes, you may occasionally see bunch formations, empty backfields, and, gosh darn it, motion pre-snap, but this is an offense emanating from the mind of a man who still travels to games via zeppelin, has yet to purchase a picot-tube, and sports a Baltimore opera hat to Sunday services. This offense is as close as it gets to the tried-and-true Wing-T as you get in modern college football, and, while it may not feature the fireworks seen in Stillwater or Waco, ask Manny Diaz how much he looks forward to game-planning for Kansas State and you will understand why the simplest offense in the Big 12 is at times the most effective.

Of course, any discussion of the Kansas State offense begins and ends with its quarterback, Collin Klein, who accounted for 69% of KSU's total offense last year. Klein is one of the great mysteries of college football. Athletically, he more closely resembles a back-up small forward on the Gonzaga basketball team who is constantly referred to as a "glue guy" than one of the nation's top dual-threat QBs. He's not particularly fleet of foot, his release is more reminiscent of Christian Cantwell than Dan Marino, and his haircut costs at most $4. But here's the thing: Collin Klein is the Midwest's answer to Tim Tebow. His game features jump passes, lowered shoulders on power runs, and lots of "it factor," at least according to the worldwide leader in sports. More importantly, he is proficient on the mandolin, routinely ripping out the Death of Tail Fitzsimmons before motivational halftime speeches. Yes, his throws aren't pretty and his runs appears to be happening at a plodding pace, but he moves the chains, protects the ball, and possesses an enhanced skeletal system that can apparently emerge from 30 car wrecks per day unscathed. 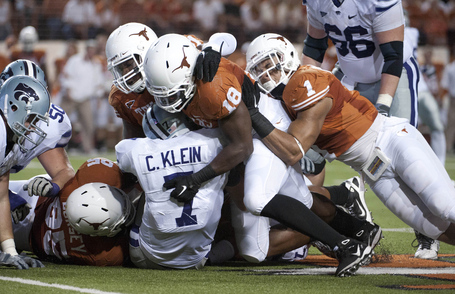 I'm sorry I brought this upon you, my boy. I'm sorry you must carry this burden. - Bill Snyder

Complementing Klein in the backfield is the Lilliputian John Hubert, who took advantage of defenses keying on Klein to the tune of 970 yards in 2011. John Hubert is not Tiny Darren, but his ability to turn the corner threatens defenses just enough that they can't completely sell out on stopping the Klein power every down. Senior Chris Harper, the former Oregon transfer, returns as Klein's favorite target and will remain the safety valve along the sidelines after Klein performs multiple great escapes in the pocket. However, the real wildcard for the offense comes in the form of Tyler Lockett, the progeny of Snyder disciple Kevin Lockett. Tyler exploded onto the scene during the middle of last season, quickly becoming one of the Big 12's most dangerous deep threats and return men, only to have his season cut short by a lacerated kidney against OSU. (Now THAT'S an injury. Internal organ injuries sound so much cooler than ligament tears, never mind all that dialysis talk). If Lockett is able to regain the form he flashed briefly last year, he could provide Snyder with a threat down the field that will keep defenses honest and allow Klein to continue to produce his mind-blowing 3.5 yard carries.

The big question for the KSU offense is can they replace three starters on the offensive line, including two all-conference tackles. For all the hype Klein received last year for his "tough running," it's the offensive line that determines the success of a power offense. I know nothing about KSU's incoming group of linemen, although I do know that Tavon Rooks is competing for the right tackle spot, and, since he is a Snyder JUCO recruit, the conservative conclusion is that he will quickly resemble Orlando Pace. The Cats do return Rimington candidate B.J. Finney at center, Klein's best friend and former roommate. However, there is trouble in paradise as apparently Finney is still recovering from Klein's wedding this past summer and subsequent exit from their shared bachelor pad. Could B.J.'s hands, still damp from wiping away the tears of lost love, falter and deliver errant snaps during the 2012 season? The answer is absolutely yes!

Expect the KSU offense to gain 43 yards against the Longhorn defense in 2012 while mysteriously putting half a hundred on the score board. This is known!

Just as the Powercat offense relies heavily on runs right up the gut, the defense focuses on taking away any runs between the tackles and forcing opportunistic turnovers on the edge. This worked spectacularly during the 2011 season, but the 2012 team is missing a key cog from last year's machine in the form of All-Big 12 defensive tackle Roy Kibble. Kibble's stats weren't gaudy, but his presence demanded double-teams, allowing the linebacking crew to react and fit cleanly. Kibble's counterpart in the middle, Vai Lutui, will be counted on to step into Kibble's role this year, and I know nothing about him other than that he probably enjoys Spam just as much as your average Kansan. Meshak Williams returns as the Cats' all-or-nothing pass rush threat. His pass rush repertoire consists of two moves: bull rush-to-rip-to-speed rush and get blocked. He will force 3 fumbles against the Horns.

The LB corps is led by Arthur Brown, one half of Kansas' most highly-recruited fraternal duo. While baby brother Bryce is no longer with the team, Arthur responded to Snyder's alternative religion last year and received All Big 12 honors in turn. He's a dynamic force in the middle of the field, particularly when he is allowed to flow cleanly to the ball. If the defensive tackles can keep the opposing big boys off him, he will compete for national honors.

The secondary is led by returning All-American Nigel Malone, who led the Big 12 last year with 7 interceptions. I didn't watch many KSU games last year, but I assume at least 4 of those interceptions were due to the ball being carried into his hands by ravens. Ty Zimmerman returns at safety and will be referred to as the quarterback of the defense multiple times throughout the season. The other spots on defense are all still question marks.

I'm projecting three losses for KSU this year: @OU, @WVU, and @ISU (if any team can out-effort a Synder team, it's a Paul Rhoads team). Every year, as Longhorn fans, we laugh about how a loss to Kansas State is virtually assured, even if they aren't on the schedule. I'm still in wait-and-see mode for the 2012 Longhorns, and the idea of a Texas team going to Manhattan in early December and emerging with a win just doesn't add up to me. Honestly, Kansas State could win anywhere between 5 and 12 games in 2012, and it wouldn't surprise me.

Weird things have been happening up there on the plains for a long time, and black magic only gets stronger with age.