Share All sharing options for: 2012 Texas Longhorns Wide Receiver: Who Steps Up?

The wide receiver group is as crucial to the prospects of the 2012 Longhorn offense as the offensive line or quarterback and though the potential certainly exists for this group to exceed expectations - and possibly even feast on defenses geared to stop the Texas running game - we're short on known playmakers, injuries to a key member of the corps would be potentially devastating, and the Longhorns are overly reliant on the potential contributions of true freshmen or unproven depth.

Ranked by pure talent and proven experience, Texas likely finds itself with the 6th best receiving corps in the league. Mull that over. However, where you start isn't where you finish (just ask Longhorn 1500 meter runner Leo Manzano) and good luck, a resurgent Mike Davis, and solid contributions from freshmen and role players will mean a surprising, dynamic unit.

You should also note the encouraging TE and RB efficiency numbers. They're mostly a function of play action and good play calls, but it also presages the direction of our 2012 passing game. If offered a prop bet that the Texas TE position will catch more or less than 29 balls (their aggregate in 2011) in 2012, take that over. And keep your eyes on DJ/Daje/any third down back if they can demonstrate facility catching the ball.

Incredibly quick, with strong change of direction and stop-start ability, good hands and body control, Shipley is a presence dynamic enough to force an honest defense against the Longhorn running game. Or at least create 1 on 1 match-ups for the other WRs when he draws the double team. The best true freshman Longhorn wide receiver since Roy Williams would have put up even bigger numbers (44-607-3) if he hadn't been plagued by injuries. Jaxon also threw three touchdowns, can run option, and is a potential impact player on special teams. Shipley is one of the three or four most important players on the entire team and his health is paramount to Longhorn offensive success. 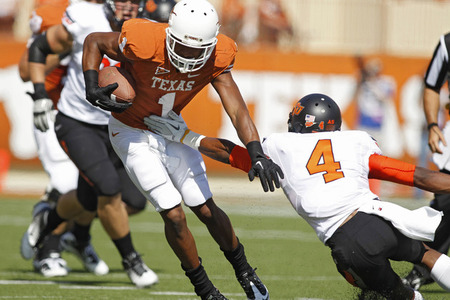 As disappointing by the end of his sophomore campaign as he was promising as a freshman, Davis was a net negative in the Longhorn offense after mid-season. He dropped easy balls, sulked when QB play stunk instead of offering support, and ran routes that mocked Euclid. His last game was a 0 catch shutout against Cal (preceded by one catch for 7 yards against Texas A&M; 5 catches for 48 yards against a Baylor secondary that Shipley and Goodwin both torched). By all acounts, Davis had a promising offseason, and we all wish the best for him, but when you anoint yourself as Magic Mike and your Twitter quote is:

....you're firmly encamped in the No-Man's land between bravado and blowhard if you don't perform. Davis has shown a sneaky ability to get open downfield despite a lack of top end speed and, particularly in his freshman year, showed legitimate skills as a route runner and after the catch. While Shipley's health is paramount for passing game success, the second priority is for Davis to take over as a reliable #2 who can punish single coverage. Will Magic Mike pull a disappearing act?

Though his track speed hasn't always translated cleanly to the field and reasonable corner play can negate his potential impact by banishing him to the wrong side of the deep sideline, Goodwin is a tough little customer and a major asset when he gets the right match-ups, or can catch a ball on the move. Last year, Goodwin caught 33 balls for 421 yards and 2 TDs, made a nice contribution in the rushing game (22 carries, 220 yards), and stepped up down the stretch when he was (mis)cast as our #1 WR. Goodwin caught 18 balls for 238 yards and 2 TDs in his last three games, and, while encouraging, our good feelings for Marquise shouldn't be confused with effectiveness when cast as a primary WR. The number don't lie: his Adjusted Targeting numbers were poorer than fan whipping post Mike Davis. My immediate concern is potential injury in his transition from the linear world of long jump to the stop-start of football.

A possible Gaskamp Award candidate, the senior Hales is the receiving corps' answer to the scrimmaging magnificence of Jeremy Hills. He's always had quickness and the ability to clown a flat-footed defensive back, but his effectiveness seems to fade quickly when faced with a reroute at the LOS by a guy on scholarship. He has 13 catches for 87 yards in his career and a few key catches in his final campaign could offer a Brian Carter style legacy.

A personal favorite for his love of contact in the three games before his season ending injury, the sophomore Harris is a former high school multi-tool with a fantastic frame, a football player's mentality, and reliable hands. And he can throw a touchdown pass, if needed. What isn't known about Harris is what he adds to the position in terms of actual stress on a defense. Is he a blocker who can work underneath and catch an occasional ball or is he a physical chain mover who can do some things after the catch bullying smaller DBs?

MO came here with similar skill set to John Harris (former high school option QB turned WR) though on an even bigger frame and is currently somewhere between a TE and a WR. Absent an offseason increase in speed, I don't see his easy best use in receiving roles likely filled by Grant, McFarland, Harris, Caleb Jones.

The redshirt sophomore moved from DB to WR to add depth and he's finally starting to fill out a rangy frame. Little is known of Jackson at his new position (though he played both ways in high school) and he's one of a few possible big body options to add depth and move the chains on 3rd and 8.

Counting on freshman WR contribution is dicey, particularly if your offense relies on a WR's ability to make a good decision about when to run to open grass or soldier through the route. In combination with inexperienced QB play, it can be frustrating. Still, if these youngsters are given specific niches and tasks and are able to fill in around reliable and productive assets like Shipley, Goodwin and, hopefully, Mike Davis, they can serve as a needed injection of athleticism and big play ability. We need 'em.

The talk of offseason 7on7 play, Johnson is a player to watch in Fall Camp. One of his strengths is his ability to work downfield and he has a loping, elongated stride that lulls DBs into complacency.

There was a wide chasm of opinion on his upside, but one thing that's quickly evident in his tape is ridiculously good hands, small space athletic ability, and outstanding ball skills. Although 4.4 speed is lovely, the list of dominating big body college WRs without it is long. He could contribute immediately moving chains.

Our rawest talent at wide out is the best pure athlete of the three. We're talking Curtis Brown quicks. The same things that intrigue me about Sanders at cornerback are all translatable to receiver: long arms, quickness, ability to create in the broken field, quick feet on a long frame. How quickly can he ramp up? We'll see him in the screen game, at minimum.

2. Mike Davis must come through

4. A big body WR must step up to extend drives and reduce wear and tear on the three aforementioned

5. Look for TE and RB positions to combine on 60+ catches as a means to supplement WR play

6. Any value add from a freshman, Hales, or someone unexpected is quite valuable