I didn't get to see the game live as I was at a wedding in Carmel, providing further evidence that Bay Area denizens are unaware of the relationship between Saturdays and college football. However, through mobile updates I immediately surmised that Malcolm Brown must be injured and a slow start against a bad New Mexico team would mean kerosene for the crazy. Fortunately, I was wrong on my first assumption, but right on my second.

It's a different game when you can view it unburdened with assumptions. I certainly understand the frustrations and New Mexico is as bad as I thought, but the offense was mostly slowed by a lack of possession, not lack of production.

Coming in, I wanted the staff to use the Lobos to work on the passing game and was happy to see another 30+ attempt week from our QBs. They combined for 21 of 30 for 285 yards, 3 TDs, 0 interceptions, and Yards After Catch numbers that would make West Virginia envious. We appear to subscribe to the "teach Ash to swim with floaties" school of instruction over "just throw his ass overboard and see what happens." I'm just glad he's logging a lot of time in the water.

The run game wasn't really emphasized and very basic. We were also clearly working on some stuff.

One hallmark of a Harsin offense is its hard-to-categorize productivity that ends in points. Daje Johnson (so the training camp hype was legitimate) catching a 45 yard shovel sweep touchdown, and David Ash running 49 yards for a touchdown against a succession of flat-footed Lobo defenders, sit in the no-man's land of offensive categorization.

Nebulous offense. I dub it: Nebuloffense. 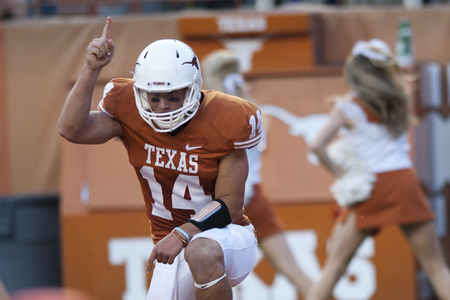 Ash's 16 of 22 for 221 yards, 2 TD, 0 int performance means he now sits on a 73.2% completion percentage and a 158 passer rating after two games against poor defenses. He had a few nice intermediate throws on 3rd down that really pleased me, particularly the twenty yarder to Bryant Jackson (in which he purposefully threw low and behind to avoid setting up his WR for a big hit) and a nice stop route to Marquise Goodwin at the sticks. On the negative side of the ledger, he nearly threw a pick on a terrible read when New Mexico rolled out of deep coverage and their LB drifted to contest the sideline, and he had a spastic Landry Jones-style fumble favorably ruled as an incompletion.

Ultimately, Ash was credited for 273 yards of offense and 3 TDs on his 26 plays over three quarters. I'll take it.

I love that we kept throwing the ball around when Case McCoy came in. If Mack learned that running your offense with 2nd and 3rd teamers isn't running up the score (and makes you a better team down the road), then it truly is the dawn of a new day.

The negative aspects of our passing game performance thus far rest primarily in unknowns - Can Ash hit the deep ball when it's there for us? How will average WRs fare against better defenses? Can Ash make quicker decisions with the ball? In that sense, it's a test of your basic disposition as a fan. The optimist sees a foundation for confidence and a springboard for future success. He's only a sophomore. The pessimist sees an incomplete grade as an indictment - Ash CAN'T EVER conceivably do the things we need done because he hasn't yet. The realist sees a QB that we're learning has a much higher floor than last year, but a still completely unknown ceiling. The next four games will tell us whether we can comfortably install ceiling fans.

Marquise Goodwin continues to block his ass off, nearly singlehandedly creating Mike D's TD catch. Our gold medalist in every down effort.

Mike Davis turned in 3 catches for 30 yards and 1 TD. He played harder when the ball was away from him than last week, I even caught him blocking a safety back over the pile during a run play, but the end zone high step with the ball stuck out too early in defiance of showboating rules and basic ball security was a look-at-me head shaker. Even in his good, he's determined to show his bad. Jaxon Shipley's 2 for 30 included a jock dropping move on a New Mexico cornerback on the sideline that made me laugh out loud. Would hate to be "it" in the Shipley household playing tag.

John Harris climbed the ladder with authority to bring down a 17 yarder from Case McCoy. Bryant Jackson and Kendall Sanders also had grabs and it's nice to see them participating in the offense.

Although I was happy to see MJ McFarland get downfield for a 4th quarter TD pass from McCoy, these TEs are killing me when they max protect. Greg Daniels is still an understandable work in progress, and he's a year away. Through two games, Barrett Matthews is clearly our best blocker. Curious to see if that holds up against bigger and better DEs or if he might get a shot at H-back.

So, Daje Johnson happened. 4 touches, 70 yards, quick as hell. Looking forward to his next installment.

Although the unit had modest rushing opportunities, they continue to kill it as receivers with 8 receptions for 126 yards and 1 TD, including receptions of 45, 23, and 22. The fact that every one of our RBs can catch and operate in space against linebackers or safeties is a major strength that doesn't get enough attention. If you're a fan of cheap passing yards, these guys can provide them.

Bergeron got all of the opportunities between the tackles and performed OK with 11-49-1. The absence of Malcolm Brown from the stat sheet isn't that big of a deal when you consider that the staff wasn't going to play him after the game was decided and there were only 20 true halfback carries to distribute (take away WR, QB, fly sweeps). We as fans have a certain degree of investment in statistics or being proven right (namely, that Brown is our best back). The staff appears not to care. Opponent, game plan, and situation will spit out funny results each week.

Roberson was significantly better than last week, but it wasn't really possible to be worse. At this rate of growth, he'll be Daryl Johnston by OU. What? Growth curves flatten out? Damn.

A more mixed report card after last week's report was pinned on the fridge with a scratch n sniff. But much better than I thought. When we give up 2 tackles for loss over the course of an entire football game and one of them isn't on the OL, it's tough to be that condemnatory. Our run game was quite vanilla throughout and I have a sneaking suspicion it was meant to be. Protection was generally pretty good and most of the pressures on Ash were because they brought more than we could block or we had busts from RBs and TEs (Daniels and Roberson combined on one in Q3 on #18; Luke Poehlmann had a very poor effort in early Q4).

The screen sack was a pretty good example of a play attributed to the OL stat sheet that rests on the skill guys. New Mexico brought a blitzer on the backside. We had it set up nicely in front of Shipley, but Ash's vision was obstructed by the New Mexico DL locked up with our OL and he missed his passing window. Held ball. Sack.

The most the offense could have scored in the first half was 28 possible points in their four possessions. They scored 17 (and it would have been 20 with field goal make). Overall, the offense was pretty productive with the possessions it had, including touchdown drives of 88, 82, 80, and 75 yards. We used the game to work on our stuff, get Daje's feet wet (he's going to become a big part of what we do), and still managed 10 of 14 on 3rd down conversions, 4 of 4 in the red zone, and 7.1 yards per play. It can't be overstated how bad New Mexico is and Texas Tech will put 50+ on them in Lubbock, but experienced QBs and good WRs are the Easy button against bad teams.

Eager to see how we handle an amped game environment in Oxford and a date that Hugh Freeze had had circled on his Dukes of Hazzard calendar.