Rick Muscles is a king of Mississippi radio. @RickMuscles is a legendary Twitter follow and author emeritus at EDSBS. Rick Muscles is master of the squat rack and a renowned circumventor of age of consent laws. When he says he squats 150 two hundred times, he's not talking about the weight room. He means the Pi Phi house. WINK. Sometimes he informs popular college blogs that he is BRINGING THE THUNDER to them. Those blogs have no choice but to submit to his will lest they receive an axe kick to the throat.

He's also extremely funny, knows everything about Ole Miss, and has Houston Nutt stories. So read on....

Rick, thank you for joining me. It's a privilege to play an SEC opponent, even if it's the dregs of the SEC West. Proposed school motto: Ole Miss - we're Kentucky without basketball! I'm sad your mascot is now a bear, and not a Chi-O in a sun dress. Though what's the difference. There is a bottle of rye secreted in the mainsail of my replica tall ship on the bureau. Bring it to me.

Mack Brown has a personal theory that every team we face in a "road test" will inevitably "surge" on Texas initially and thus we should expect to be behind early. Is this: 1) the dumbest thing you could ever possibly tell a team or 2). not?

Honestly Mack's job is motivating young men to play spirited football for the joy and honor of ALLLLL the fine folks in Texas. So he's supposed to say dumb stuff like this. It's in the job description. Just wish he wasn't so bland about it. Personally I prefer the Saban method. Recently, a friend told me that the Nickster plants a question with the media specifically so he can scream at the reporter to prove a point to his team. Doesn't this seem more fun? When Mack Brown wakes up at 4:45 in the morning, to let the dog out and listen to conservative talk radio, wouldn't he be better served by thinking of elaborate ways to prove points that adults think are dumb? He should consider taking a cattle prod to a press meeting and shock a graduate assistant to prove a point. That's Texas for communication.

The best thing you can do to shock any graduate student is show them their post-graduation job prospects.

Rick Muscles, how many Ole Miss KAs will secretly pull for Jaxon Shipley because he's named Jaxon (with a X) and has gorgeous bangs?

Had a discussion with Bunkie Perkins from @fotprogram about Jaxon (with an X) last night. Ole Miss has a player named Brishen Matthews (most Ole Miss name ever?) who plays DB. Brishen has long flowing locks and plays with the abandon of a Ghost Rebel scaring off meth addicts from his long abandoned cotton fields.

He also has a tattoo of a shark eating the SEC logo.

Since Jaxon (with an X) and Brishen have the frattiest two names this side of a University of Virginia Law Class, we discussed what sound it would make when Jaxon and Brishen inevitably nail each other on a slant.

You just conjured a flashback image for me. A drum circle in Austin's Pease Park next to earnest nerds sword fighting in their Dungeons and Dragons costumes. The thunk of their padded wooden blades on a trash can lid shield is the sound of Brishen colliding with Jaxon. What if their bang racks interlocked like two snorting elk?

My favorite of all was Houston's motivational poster - The Circle of Champions. 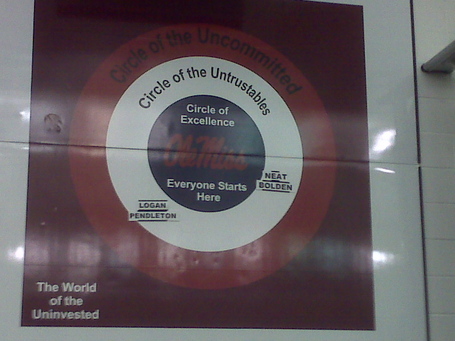 If you'll examine the poster, it shows the bullseye as, "The Circle of Excellence." In the caption below, it states, "Everyone Starts Here." This is hard to believe because under Nutt's watch, none of these guys went to class and no one on defense had been taught to tackle in about 2 years. I don't trust anyone in this circle.

Then we have my favorite, "Circle of Untrustables." Let's not kid ourselves the dudes in this circle were the only ones that had any sense. If Nutt told me he thought I was trustworthy, I would immediately surrender myself to Interpol because clearly I was responsible for some sort of Balkan genocide.

Then we have, "The Circle of the Uncommitted" and "The World of the Uninvested." These titles sound like Nutt was trying to understand Velvet Underground lyrics and this is what came out.

Here is Nutt the first time he heard, "Venus in Furs." 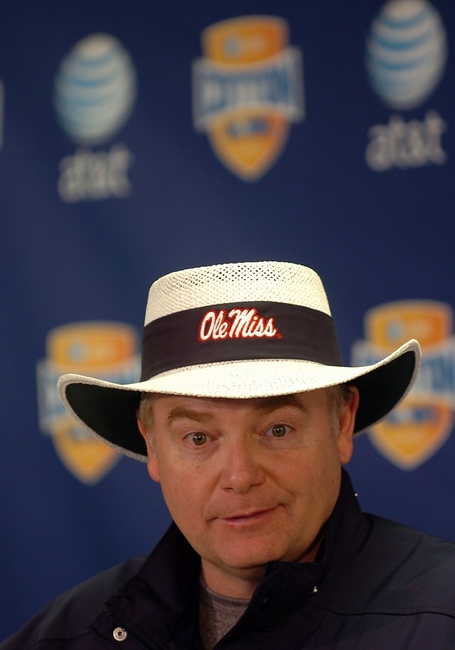 So the Circle of Excellence thing is real. And I'm dying laughing right now.

What's the best strategy for a Texas fan to score free food at your tailgate?

My tail gate is a sparse and populated by Ole Miss faculty members. It's an honorable and modest affair and introducing yourself will get you a piece of fried chicken and a chocolate chip cookie. However, I ask you Texas fans to allow me entrance to Oxford's finest restaurant, City Grocery. According to my eyes and ears on the ground (my Mom and her cocker spaniel) Texas fans have rented out the nicest restaurant and bar in Mississippi and are only allowing card carrying Texans. Please let me in! I'll wear a cowboy hat, vote for Romney and sing Cory Morrow's "Nashville Blues" at the top of my lungs for an invite.

Would it not be more reasonable to determine game outcomes based on state GDP?

Instead of that let's determine the game on number of Elvis Pressleys produced. That's what I thought!

Rick Muscles - as King of the Squat Rack and satisfied Extenz user, you know that size matters. The Ole Miss D seems smaller than their post-college job prospects. I see a 230 pound DE, a 255 pound DT, a 200 pound LB. Will carbohydrates not adhere to these sprinting blurs of ESS EE SEE speed? Is this a concern?

This is a huge concern. Especially since Ole Miss has essentially played 2 teams that even the Big 12 wouldn't consider inviting to their conference. The 200 lb linebacker is the brother of the nation's number 1 recruit. He's actually pretty good but attracting his brother could be the reason he's seeing so much run. We could argue until our faces turn blue about running backs and quarterback but the match-up disaster is on the line. Your humans are bigger than our humans. Team speed kills but that won't help if your defensive tackle is getting knocked into the middle linebacker.

Speaking of getting big. Bro. What do you deadlift?

Currently I'm doing an MMA program. I don't really do a lot of maxing out. In my last cycle was sprawl dead lifting- 245 lbs at 5 sets of 8 reps. I weigh about 185 lbs so I'm pretty happy with that. When I make my MMA debut- probably in the worst strip club you can imagine- I'll roll into the ring to Jay Reatard's Night of Broken Glass.

That's pretty good. When I was in 11th grade... turns on blender

Bo Wallace leads your team in rushing, boasts a 187.59 passing efficiency rating, and Ole Miss is averaging 550+ yards per game. To me, he's like a big Kelly Ripa or a Hansen brother on HGH. Do you deny that he is Vince Young reincarnate?

We've got a lot of guys w/ beautiful hair on this team. He's looked really good against the defenses of University of Central Arkansas and the University of Texas at El Paso. He throws the ball well and runs the ball hard. He also gets to play in a fun, innovative offense. We sort of ran a fumblerooskie last game!!! I like him. He was also in a pretty intense frat fight in his first semester. According to rumor, he showed up at a pool party demanding for people to punch him in the face. Punch him they did!

That is the difference between Bo and Vince. Vince has a little guile to him. Vince would juke, pump fake and run
around defenders. Bo has been lowering his shoulder into LBs and DBs lately. This will present a problem against Texas, LSU and Bama. At least he's got awesome hair, right?

Hair counts for a lot. Mine own is lustrous and beautiful, but I cut it short for reasons of modesty.

Vince doesn't receive blows. He delivers them. I posited years ago that Vince Young was sent to Earth solely to strike down bitches. Don't want to be struck down? Don't be a bitch in his presence - USC, nightclub owner, Oklahoma fan, grown man he beat up when he was 14 for messing with his sister. It's one of the reasons we love him and he can do no wrong in our eyes.

Will you please tell your punter story?

Right before the season started we found out the best player on Ole Miss has redshirted for the season. Last year Ole Miss was a disaster.

The Rebs had one shining diamond- The Punter. Everybody in the SEC says Brad Wing is the best punter. Whatever, that dude is an Australian dick. Campbell is the best pure punter in the league and doesn't get taunting penalties. It appears Freeze has redshirted him for the future. I keep trying to get excited about the Rebs hot start but then I remember Campbell is rojo camiseta. That's my main reason for tempering my Rebels expectations from Saturday until December.

The coaches make it clear the Rebs are at least a year out.

And so are we.