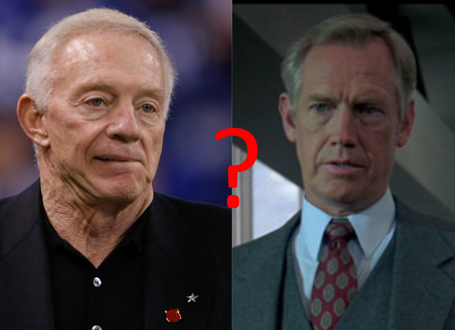 Two high-powered businessmen at the top of their respective industries square off, as Jerry Jones of the Dallas Cowboys takes on Dick Jones from OCP. Who'll come out on top in this week's Head to Head matchup?

Both of these projects were high-cost, but both smelled like success at the outset. ED-209 was ready to roll for patrol, urban pacification and military applications, and the spare parts revenues alone were going to boost the bottom line for 20 years. Roy Williams had proven himself as a 1,000 yard receiver in Detroit, and pairing him with Tony Romo was going to give Dallas the firepower it needed to rule the NFC East.

Unfortunately, design flaws proved the undoing for both of these expensive models. ED-209 was defeated by simple targeting procedures (turning a hapless executive into ragout during its initial demo) and staircases, ultimately being relegated to guard duty outside OCP headquarters where it was casually dispatched with a single shot from a Cobra assault cannon. Roy Williams was defeated by simple route running concepts and some major software bugs in his 'catch the ball that hits you in the hands' subroutine, ultimately being relegated to the Bears where he was casually dispatched by...pretty much every corner he faced.

Mercifully, ED-209's design didn't allow it to break out into a Cheshire Cat grin after botching the simplest of tasks, so it takes the edge here.

Now this is more like it - both these dudes were badasses to the core. Clarence Boddicker was the unofficial crime boss of Old Detroit, dominating everything from drugs and prostitution to armed robbery and full-out mayhem. Michael Irvin was the boss of the NFL's baddest bunch, dominating opposing corners by day and more or less every vice available in Dallas by night and then showing up on three hours' sleep to out-lift the linebackers in the weight room. Boddicker threw an accomplice out of a getaway van into the windshield of a police cruiser, and Irvin raised him by stabbing a teammate in the neck with scissors. Irvin was arrested in Dallas, while Boddicker was arrrested in Old Detroit - which was, if you know the history of the film or just have a good eye for skylines, Dallas.

In a race this close, it comes down to one inescapable fact - if he walked into a a room full of cocaine and hookers, Irvin would NEVER have told the bitches to leave.

Dick: The Guy Who Got Melted By Toxic Waste

I was just starting to delve into this when I realized that that the toxic waste guy (Emil) was really Boddicker's hire and thus was more of a sub-contractor. In fact, let's just go with:

Dick: The Guy Who Got Melted by Toxic Waste

Jerry: The Guy Who Designed the Collapsing Practice Bubble

When it comes to causing problems for their ultimate bosses, the practice bubble guy takes this one in a rout. Dick doesn't seem like the kind of guy who's going to be paying out any workers' comp claims for a little toxic waste, while Jerry could have been on the hook for some bigtime lawsuits when that bubble came down. In fact, Jerry only managed to duck major damages from injured special teams coach Joe DeCamilis by agreeing to keep him employed regardless of how many times his unit serves up game-killing punt blocks like the one against the Jets last season, comically fails to achieve the 23 yard line in kick returns or attempts to cripple Dallas' most talented wide receiver to achieve a 4.0 yard punt return average.

Dick's grand dream was to raze Old Detroit and build Delta City, a 21st century (remember, this was in 1987) technological marvel that would have been the envy of America's mayors - and conveniently bringing in millions in gambling, drugs and prostitution revenues from construction workers in the process. Jerry's grand dream was the new Cowboys' Stadium, a massive and frankly Pharoah-like project that is the envy of America's NFL owners - and which has been christened with bathroom sex and cocaine usage in the high-dollar areas and probably everything up to and including human sacrifice in the Party Pass sections.

While Dick took a dive before the first shovel broke ground for Delta City, Jerry can say that his massive ego project actually came to fruition so he claims the edge here as well.

Jerry: Grooming Stephen to Take Over

Dick: Blowing Up Bob Morton With a Hand Grenade

Um, wow. Yeah, gotta go with Dick on this one.

Dick: Outed as a criminal by a cyborg's recorded memories; plummeted to death

Jerry: Basically everything from 1996 until now

At least when Dick fell from glory, the drop only lasted a few seconds - and he didn't drag an entire fanbase down with him.

So there you have it - after six grueling events, our silver-haired

Tell you what - if the Cowboys get past the Seahawks on the road today, we'll use that as our tiebreaker.

This is your Sunday NFL/Cowboys Open Thread.