Ever since the Holiday Bowl I've been struck by some of Diaz's schemes. This isn't the defense we watched in 2011. It's been noted some already by Scipio, but the base defense for the Texas Longhorns has changed from the 2-deep shell we watched in 2011.

Instead, our pre-snap base look is a MOFC (middle of field closed) look with an 8-man front that can morph into any of several different defenses. We play all 3 linebackers every down save for 3rd and long when we bring out our Dime/Prowler package and remove a defensive tackle and Edmond from the field in exchange for Josh Turner and Mykelle Thompson.

Our base look against the Ole Miss Rebels: 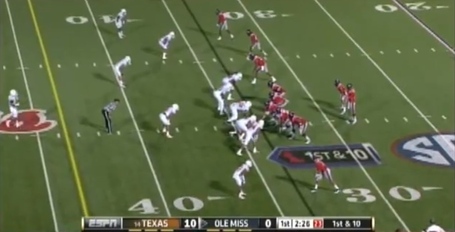 At first I thought this was our plan vs. trips formations (3 receivers to one side of the field) but then we also used it against the Ole Miss 20 personnel offense they trotted out when they realized that we didn't know how to defend the option: 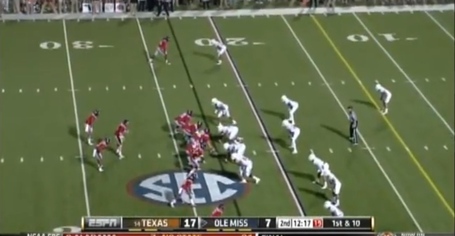 Here's the basic plan: Demarco Cobbs lines up to the field side. If there's a #2 receiver removed, then the safety on that side of the field lines up over them. The other safety lines up as the deep safety.

In this instance Adrian Phillips, who is always the boundary-side safety, lines up over the #2 receiver to the boundary and Kenny Vaccaro backs up to be the deep safety.

Because we drop a safety down to take the inside receiver, we keep all 3 linebackers in the box against the run, in addition to the extra safety who is now closer to the line of scrimmage. So we have an 8-man front and can theoretically outnumber running plays.

Defenses have moved towards playing with 2-deep base looks that can morph into 1 deep safety defenses in order to disguise but Manny Diaz is able to disguise a lot of different coverages from this look.

We could also drop the 2nd safety back and play a 2-deep coverage, if we so desired.

You can see all the advantages to this scheme in that we can outnumber the running game and disguise man and zone, but there are some disadvantages that have really hurt us so far:

1). We aren't getting an advantage against the run.

Our LB's made numerous mistakes against the option in the first half such that Ole Miss almost became a Wishbone team in order to exploit us. If you have an 8-man front, and linebackers fill the wrong holes, that only leaves 3 deep players and the pursuit to clean things up.

Not everyone on the schedule is going to use the option, but they will use other packaged concepts with zone to confuse and isolate the LB corp. Check out this play in the first half: 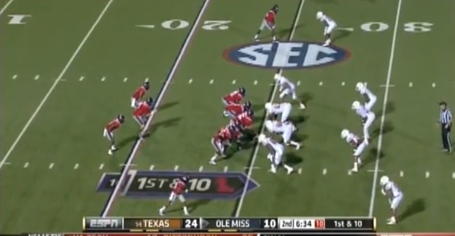 They have 2 running backs, 2 receivers to the right (meaning Phillips is lined up vs #2 and Vaccaro is deep middle), and Texas has an 8-man front. 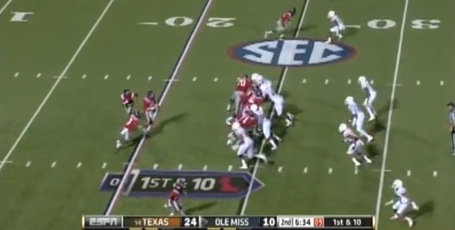 It's the triple-option...again. Their previous drive utilized the option to score their first touchdown.

First thing about the Shotgun spread-option is that what you have first is the Zone-Read. They allow the DE on bottom to come unblocked and Burnetti (Bo Wallace is on the sideline receiving attention after Vaccaro's death blow) reads him to determine whether or not to release the ball. The Weakside linebacker's assignment is determined by the DE. If the DE crashes, he needs to stay back and read through the B-gap to determine if it's a hand-off or not. If it is, he fills the B-gap, if not, he takes the QB.

The other linebackers need to fill their gaps like a normal Inside Zone run. Steve Edmond takes the inside A-gap that doesn't have a DT in it, Cobbs plays the ball outside in. He's an extra-man but Ole Miss is running the ball to the other side of the field so he's made redundant except as a pursuit player or filling the backside. 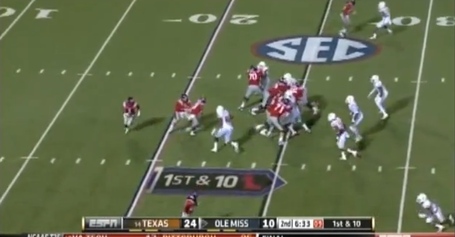 The DE plays the QB, which means that the Will Linebacker (Kendall Thompson here because Jordan Hicks is hurt) needs to fill the B gap if it's a hand-off but he's wisely staying back until he sees where the ball goes. Cobbs and Edmond appear to be reading the hand-off as well. Cobbs is in position to fill where needed, Edmond is moving a bit outside although he has interior gap responsibility.

If there's no hand-off, Thompson and the DE will have the QB, and whichever of the 2 defensive backs who have force responsibilities will take the pitch-man. Since Phillips began to drop back with the snap of the ball I'm assuming we were in a cloud coverage and that the corner has run responsibilities.

Ole Miss often packaged a bubble screen with these plays so that Phillips would have to stay outside and make sure that the #2 receiver didn't get outside of him and it makes it hard for him to affect the play. 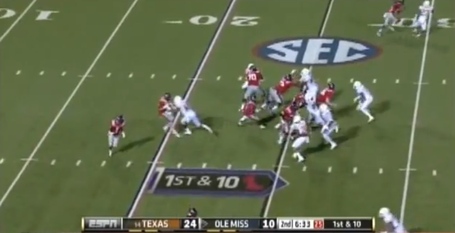 QB hands the ball off and the DE comes after him anyways. Thompson has drifted outside and is now coming back in to fill the B-gap. Edmond, however, is already there and Cobbs is cut off from filling the A-gap by the Center who has come off his combo-block. 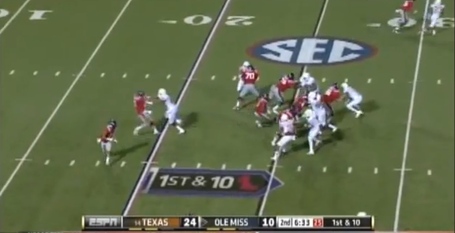 The RB reads the block on Cobbs while Edmond struggle to get back to the A-gap as well. 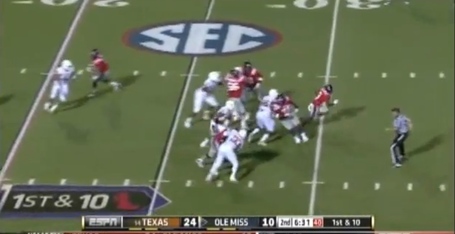 Cobbs can't beat the angle-block and Edmond can't get there either, resulting in a 10+ yard run that's stopped by Vaccaro.

There are a number of things that could have been going on here:

A). We could have scraped the linebackers towards the option-side: Meaning Cobbs takes the A-gap, Edmond takes the B-gap, Thompson goes out to the QB, and DE takes the dive. Or

B). Cobbs is the extra man on the outside, Edmond takes the A-gap, Thompson takes the B-gap, and the DE stays home on the QB and forces the hand-off.

I've emboldened what actually happened and you'll notice that there was no consistency between the players. Thompson and Edmond scraped towards the option but Cobbs did not aggressively do the same and the DE stayed home on the QB. I think they were confused by the fact that their rules for playing Inside Zone take them away from the QB and the pitch-man.

This happened repeatedly with the option over the course of the game where we had multiple players in the same gap. Because the spread-option is built around Inside Zone, it will absolutely destroy a defense that doesn't build a wall against the run as the RB and OL are targeting the creases.

One obvious concern here is that between our 2 dozen MOFC coverages, stunts, and blitzes our young linebackers don't seem confident in where they are supposed to be. Can we clean this up with practice and repetitions before we play teams that will tear us apart? Possibly, but it sure doesn't help if Hicks can't come back soon.

For me, another great concern is Edmond. He's dominant in a broom closet, he has active and soft hands in coverage, but if he isn't in the right gap or near the play he can't get there in pursuit. He can absolutely fill an interior gap effectively, but he struggles to hit the right one at times and he isn't great scraping or moving laterally in space.

Spread-option or passing teams will not struggle to find ways to get him space where he'll either need to move well laterally or be decisive and right.

He has an intriguing skillset but this isn't what I would want my Mike linebacker to look like in this league. I'd rather have someone who may not dominate a guard's block but who can scrape, stunt, and make plays in pursuit.

As Diaz has noted, if we can get him in the right spots he might be fantastic but it's hard to have someone out there who can't recover from mistakes or erase other's mistakes in a linebacking corp loaded with inexperienced players who are making a lot of mistakes.

I'm curious to see what his first step would look like as a pass-rusher, I can't help but wonder if he should be at DE, although it obviously wouldn't solve our linebacker issues to put someone even less experienced out there, nor take advantage of his talents this season.

2). You can be vulnerable deep.

In Cover-1 or the various Cover-3's you don't have us much deep help as you do in our Cover-5 or 2-Read schemes.

Moncrief busted us a few times and other big or talented receivers will be dangerous as well. Byndom and Diggs are an excellent tandem, but it only takes one mistake to give up a score. I'm generally okay with this risk and using some MOFC coverages but when our run defense doesn't really benefit it becomes a more questionable strategy.

In the 2nd half we came out in a 2-read nickel with Cobbs as the Will linebacker, Vaccaro as the nickel, Edmond still at Mike, Phllips moved over the Field Safety, and Josh Turner in as the Boundary safety. Then we switched back to a MOFC coverage again and Moncrief busted us down the sideline when Byndom couldn't make a play on the ball and Phillips wasn't able to clean it up. They misplayed the underthrow, which we saw plenty of on the other side as well. It's actually tricky for a secondary to play the underthrow if they are reacting to the route instead of the throw.

From there we played more 2-read with our backers and safeties playing soft coverage. Cobbs made consecutive mistakes failing to carry a receiver and then missing a tackle on a run shortly after, but he's apparently not even practiced the position before.

It's going to be hard to field a strong linebacker corp against the upcoming slate of opponents without Hicks and I'm not sure if there's a good fix if he's down. I think Cobbs has a ton of potential in this defense but preferably as the nickel/sam. My first solution to replacing Edmond if he proved too slow or mistake prone in coming weeks would be to move Hicks over to Mike...which may not be an option.

We began the year with an ambitious plan on defense to be multiple, confusing, and take advantage of our fantastic secondary to pressure offenses with an 8-man front and bump'n'run coverage on the outside. Unfortunately, our linebackers have not been able to take advantage and the solution may be simplifying down to more 2-read with our MOFC coverages as the change-up rather than the fastball.

We can still bring a lot of disguise from that look, but the 2-read defense leaves us less susceptible to big plays from the run or pass with the 2 safeties able to come downhill and erase mistakes. This may have been the plan anyways, as future opponents offer more threats in the receiving game and don't really require an 8-man front to stop their rushing attacks, but it should be the plan regardless until we can get our young linebackers on track.

This off week will be decisive in determining if our team can clean up the mistakes and stay on track with Diaz's initial plan or if we need to simplify against WVU and OU so we don't blow our chances at a huge season before we get everyone on the same page.

Of course, our offense looks far better than I had hoped so maybe we'll be fine either way.