Will Texas get Lunted in Stillwater? Or will the Horns face dual threat J.W. Walsh?

Oklahoma State's offensive statistical profile is a bludgeon of yards, points, and streamlined raciness written in the colors of Halloween and the scent of T-Boone's wallet whip-out. Their numbers are silly, bordering on criminal assault. And against Savannah State, it was.

And now that I've set up the premise of their offensive dominance...

My goal is to persuade you of my subjective opinion that the Cowboys offense is nowhere near as dominant as the numbers suggest and that their defense is actually markedly better than national perception (we'll tackle that in my next installment). This game will be a great challenge for Texas in Stillwater, but it will be an equal challenge on both sides of the ball.

Offensive Coordinator Todd Monken has taken over seamlessly for The Skulleted One and the Cowboys still retain a philosophy that forces the defense to account for every bit of grass, much like a TCU linebacker filling out his customs form on a flight back from Morocco.

The Cowboys have replaced bell cow wide receivers like Justin Blackmon, and the underrated Hubert Anyiam and Josh Cooper, with new faces and distributed work loads. Meanwhile, former QB Brandon Weeden turns 29 in three weeks and the Cleveland Browns are still trying to puzzle through why a dude with a receding hairline isn't showing a steep athletic improvement curve. Fortunately, the Cowboys have evaluated shrewdly and have a roster full of promising, talented, young quarterbacks in Wes Lunt, J.W. Walsh, and even 3rd teamer Clint Chelf.

And those quarterbacks, and how OSU chooses from them, hold the keys to the game.

The choice between traditional pocket passer freshman Wes Lunt and the dual threat redshirt freshman J.W. Walsh also played out in 2009 with Brandon Weeden and Zac Robinson. Mike Gundy doesn't mind wheels in his starting QB and OSU, but the construct of the OSU offense is such that getting the ball out quickly and good interior protection is their solution to pressure, not having their guy run around buying time. So the OSU coaches chose Lunt to continue the Weeden model - big arm, big body, quick decisions, can threaten every part of the field.

After Lunt was hurt early against Louisiana (and had some growing pains in the Arizona loss while also doing some good things), J.W. Walsh came on and coolly racked up 73 yards rushing and 347 passing as if he were still running his Dad's offense down in Denton. He's averaging over 10 yards per carry on the year.

So what to do?

The Cowboy coaching staff has already made their choice, but will nonetheless make Texas prepare for both QBs, and they're not oblivious to what we've all seen on film - that this Longhorn defense is struggling with assignments and run fits, thrives on pressure and turnovers, and the added dimension of preparing for and executing against a QB running option may be sufficient to have a Jordan Hicks-less linebacking corps lose their wits along with their fits, such that even the traditional OSU rushing attack will find traction.

The drawback with Walsh is that he can't threaten the deep outside - he's accurate inside the hashes and on short balls - and he's not built to take punishment (his height and weight listing seem fanciful). And his reliance on improvisation could prove more disastrous than problematic if the Cowboy coaches feel he's not capable of executing all of their throws and he wants to take on the Texas pass rush with his playmaking skills down after down.

Both QBs are capable of beating us if we don't clean up our act, but Walsh can certainly ask our defense more questions that leave us flummoxed.

It's probably the OL coach, not the OC, that's he common thread of success in Stillwater. Joe Wickline is a genius at developing three stars into maulers and teaching and implementing schemes against various fronts that give OSU a potent rushing attack even without a run option at QB in a spread offense. Which is really damn hard.

One of the reasons OSU's zone running schemes are so lethal is Wickline's ability to teach the judo of zone blocking, imparting that if a defender really wants to go somewhere, help him along, add your weight and momentum to his own so that it works against him, and then trust the RB to make the cutback.

Everyone teaches it, but Oklahoma State is just damn good at it. And if your linebackers don't play with discipline or your DL will get sideways in exchange for penetration (I'm looking at you Brandon Moore), you end up with a lot of open grass and split safeties.

Philosophically, OSU protects their OL by putting the burden of protection on the QBs themselves. OSU QBs throw quickly to open men when you play off and they throw quickly to spots downfield if you play up. Above all, they squeeze inside and only allow pressure from outside, usually a step too late. So the purpose of your pass rush is not so much to gain sacks, but to constrict the QB and WRs decision-making windows and force them into turnovers.

The Cowboys are spreading the ball around to a variety of body types and skill sets. Big bodies Blake Jackson (12-217-1) and Tracy Moore (11-128-4tds) are major red zone threats and Josh Stewart (19-208-2tds) is their answer to WVU's Tavon Austin. He's a former high school teammate of J.W. Walsh and really quick. The Cowboys are crowd sourcing the position and have had great success thus far, but have yet to see a legitimate secondary. Let's see if Texas will live up to its preseason billing. 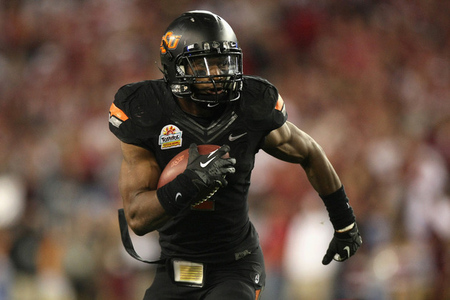 OSU churns out reliable RBs on an assembly line and Joseph Randle (64-335-4td) and 2011 Longhorn slayer Jeremy Smith (25-174-4td) should be familiar to you. I actually think Smith is the more dangerous pure running talent, but Randle is great out of the backfield (9-77) and a willing pass blocker even at 195 pounds.

All OSU backs run north-south, make a cut, and then go. They know that the pressure their offense creates will give them home run opportunities and their best chance to split your safeties (or even just run through green grass) comes with economy and decisiveness. One of the best taught running games in college football.

This was a match-up I really liked in the preseason for our defense. Three games have revealed some fundamental issues and when you add in a reasonable likelihood of no Jordan Hicks (I don't have any insider info, just using logical guesswork), there's legitimate reason for concern.

But have the fundamentals really changed? Particularly if Diaz is able to stop the run with honest numbers and flood our defensive backfield with enough bodies to allow safeties in the middle of the field while attacking some their underneath routes? The more variables we can take away from our linebacker decision-making process, the better it is for the Longhorns.

OSU has shown a real knack for fast starts (led Arizona 14-0, 49-0 and 44-0 at halftime against ULL and Savannah) and it's imperative that the Longhorns show up strong from the opening whistle.