The Cowboys' D is better than their numbers or your assumptions. Really.

Numbers don't speak for themselves. Or, if they do, make sure you're conversing with the right ones.

The Texas offense faces the first defense of the year where it won't be athletically superior across the board. The defending Big 12 champion Cowboys had a frequently misunderstood and mischaracterized defense in 2011 and the default go-to dumb, quick measure of scoring defense (27.7 points per game allowed so far) does nothing to change the current judgment, belying their D's potential and some solid internal numbers in 2012. No, we're not playing LSU here, but the popular narrative for Oklahoma State of Great Offense and Bad Defense is fundamentally wrong. Really wrong. Football fans struggle with the concept of pace and the notion that the entire team plays a role in scoring defense, and those concepts are key to understanding the rise of Oklahoma State Football. OSU's entire approach to football buoys their offensive numbers and "punishes" their defense. At least on the quick eyeball measures.

A starting defense cannot control the pace of their own offense, bad field position, garbage snaps against the 3rd team, and they don't defend special team touchdowns or pick 6s.

What a defense can do is minimize the number of yards an offense makes on each play.

For further context, they goose-egged both Savannah State and Louisiana with their starters, with halftime leads in the 40s, and though they didn't exactly light it up against Arizona, the Wildcats ran NINETY PLAYS ON OFFENSE.

That's because the Oklahoma State offense surrendered four turnovers and the Cowboys had 15 penalties for 167 yards, several of which extended 3rd downs and killed the Cowboys on overall field position. And there was a pick 6 for good measure. True, OSU's D surrendered a poor 5.7 yards per play - but some of that was exhaustion and general road panic, and on a per play basis, they were better than our performance against Ole Miss. 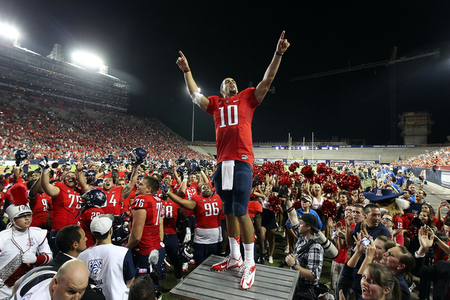 What is worrying for Oklahoma State - and where they differ markedly from Texas - is that they haven't shown an ability to force turnovers in their first three games. In many ways, they're playing fundamentally better defense than last year, but their big play ability has eroded. Why? Let's dig in and see...

OSU's most improved position group. Proof of their improvement at DT is that they returned their entire two deep from last year, but none of those guys are starting. Instead, they're playing JUCO Calvin Barnett and sophomore James Castleman. Both are 6-2, 295ish and have played well. They're making tackles for loss, collapsing the pocket, and generally giving the Cowboys an interior foundation they haven't had in a long time.

At DE, the Cowboys are playing three guys a lot: Ryan Robinson, Cooper Bassett, and former DT Nigel Nicholas. Robinson is the most gifted pass rusher and he leads the Cowboy in tackles for loss. None of these three can replace Jamie Blatnick and I question their ability to get pressure on us in our play action game, but they'll certainly be game if we keep getting behind the sticks. Nicholas is their best run stopper. I don't think these guys run all that well laterally and I expect that we'll test them on the edge.

Though this group represents a significant upgrade from last year, I also doubt their depth if OSU wants to make them play 80 snaps.

A team strength in terms of experience and depth. Alex Elkins is an athletic freak (with a pretty interesting backstory - basically didn't play football until JUCO at Blinn and then blossomed) and he's their leading tackler. Undersized Shaun Lewis is a playmaker at SLB cut from the Demarco Cobbs mold (but he played high school LB and is more instinctive at this stage) who excels as a blitzer and coverage guy, and MLB Caleb Lavey is basically their Dalton Santos. This is a capable, experienced unit and they're thriving playing behind Castleman and Barnett at defensive tackle. 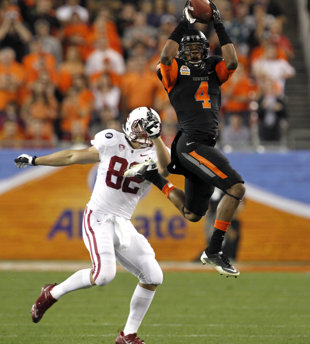 Oklahoma State has good personnel at CB, but has struggled some at safety. The cornerbacks - Brodrick Brown and Justin Gilbert - should both be familiar to you as they combined for ten interceptions last year and were a consistent strength of their defense. Brown is their version of Quandre Diggs - 5-8, 185, extremely strong, with a good base and the ability to flip his hips. He plays bigger than he is and brought 6-4, 220 Jeff Fuller into the TerrorDome last year in College Station and cut off his head with a chainsaw. Justin Gilbert (6-0, 195) is a super athletic, long cornerback - basically Curtis Brown/Kendall Sanders level quick twitch - who uses great athleticism to overcome his occasional lapses in soundness. He was the Fiesta Bowl MVP and made Stanford look like they were running in molasses. He's also an exceptional punt returner.

Safety Daytawion Lowe is absolutely fearless in run support and does fine when protected in Bill Young's zone schemes, but if we can isolate him on a man, he doesn't flow particularly well. The other safety position has been a job share between Shamiel Gary (Laverne and Shirley opening, anyone?) and Lavocheya Cooper. Basically, their names are too ridiculous for either to cover very well. That's also why Miketavious Jones is 3rd team. At safety, you need dudes named Ronnie Lott, Dennis Smith, John Lynch, Ed Reed. Dependable, straightforward names. It is known.

DC Bill Young loves to bring his corners and safeties on money downs (typically when you're on their end of the field on 3rd and 5+) and that's something that David Ash has to recognize.

Quinn Sharp is a great kicker (he punts and place kicks) and Justin Gilbert is a dangerous punt returner. I expect our kickoff coverage to return to excellent after the snafu against Ole Miss, but if this game comes down to a kick (which is what Vegas seems to think), it's hard to believe that scenario favors Texas. Similarly, giving up a cheap special teams score and a slow start on defense would be a perfect combination for KOing Texas in the first ten minutes of the game. A tie in special teams is a win for Texas.

At OSU, Bill Young traditionally likes to keep the ball in front of the defense, minimize big plays, tighten up on their end of the field, and try to turn you over. While fundamentally a better unit than the 2011 group player by player, they're not turning anyone over. Currently ranked 105th in FBS in turnover margin and that ain't good.

From a tactical perspective, I suspect OSU will play mostly honest fronts, but key hard on the run. Those safeties may be back to discourage deep balls, but they're heading downhill at the snap. They have two cornerbacks with the ability to challenge our two best receivers in the passing game and erase them from meaningful playmaking. If I were Young, I'd be very tempted to put Brown on Shipley since his strength and low center of gravity offer the best chance to disrupt early and recover late, while Justin Gilbert is a better athlete than Mike Davis.

If that's how they play it, that means there will be a lot of opportunity for our non-primary passing options: Marquise Goodwin, Daje Johnson, DJ Monroe, our running backs, the tight ends. But we've already shown some diversity in our passing game and that encourages me. Similarly, David Ash has shown the ability to work the underneath game efficiently and while Oklahoma State may not give us many opportunities downfield, if we can get the running game performing solidly paired with a 3rd and short chain-moving passing game, that may be all that's needed for a W.

We'll also learn about our OL. Can they impose their will on a reasonable defense geared to stop the run? Or will they stalemate?

How will Ash and our best wide outs respond to all-conference level cornerbacks?