Every Wednesday somebody at Barking Carnival will find what we perceive to be good content from around our vast media empire and force you to read it.

Today, I am that man (our interns keep fleeing the compound, usually with a blow dart in their hamstring).

Let's jump right in after the jump, just as David Lee Roth would want it.

The Men of Troy at Conquest Chronicles have a very nice review of last weekend here.

Championship teams are fast starting, they knock the chocolate out of you with a powerfully strong running game predicated on getting a hat-on-a-hat; they scorch you through the air the moment you pack 8 or nine in the box trying to defend it, and overwhelm you with such defensive fierceness that you would swear on the good lord's name that they are playing with 13 players instead of eleven; they score in bunches, ending any doubt early and continue to pound you into submission long after the battle has already been determined.

I am sad to lose ColoradoAg's weekend prospectus and drink recipe/recommendation here at BC but you can still easily find it by heading over to Good Bull Hunting.

Coawphch Bawf Davphie pulled in a W for the Lobos and a program that has been in wreckage for years. Yeah, it was against Southern, but you need to know just how bad New Mexico has been lately. The former A&M defensive coordinator and Notre Dame head coach now gets to take on the Horns on the LHN.

Blogger So Dear, a blog usually devoted to FSU upsets, has every coach in the ACC as a karaoke singer. 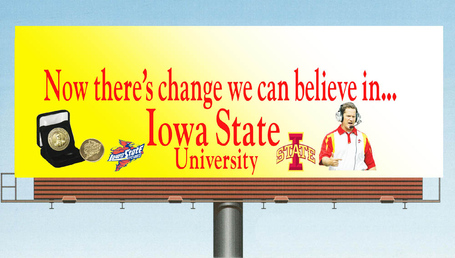