After the jump, some video highlights from the game and some stats that shed light on the value of a bunch of the plays that weren't sexy enough to make the highlight clip.

First, some of the eye candy from Saturday's game against Wyoming:

But what about the plays that didn't make the cut?

I pulled some stats on Texas' results on first and second down against the Cowboys. (Usual disclaimers that I excluded pointless drives at the end of halves and probably made an error here or there).

Wyoming hit their fair share of big plays, but they only put themselves in third and extra short once the entire game. 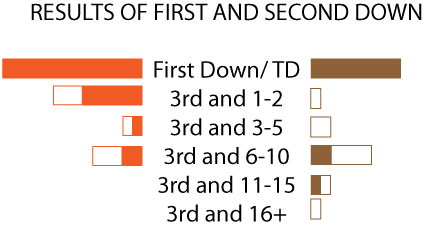 (The empty/white parts of the rectangles represent third downs that were not converted. Colored part = converted. Two out of Texas' three failed conversions on third and short came on the goal line; both times, Texas punched it in on fourth down.)

When you combine the first two rows from the chart above, it's easy to see how much more successful Texas was on first and second down. 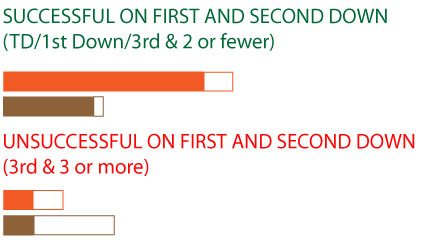 Right after the questionable late-hit-out-of-bounds penalty extended a drive that was about to end in a punt, Wyoming racked up four successful first or second down plays right in a row. If you exclude those plays, the difference is even more stark. 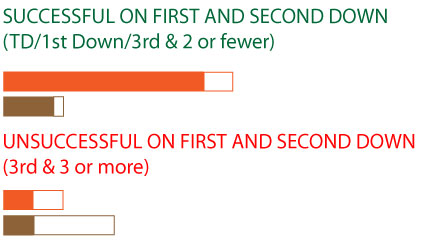 Most of what Texas did to secure this advantage came on plays I left out of the highlight clip. Plays that went for 2 or 3 or 5 yards, smart throw-a-ways, etc.

And that's where Texas buttered its bread against Wyoming.

Here's a breakdown of the plays by yardage gained. 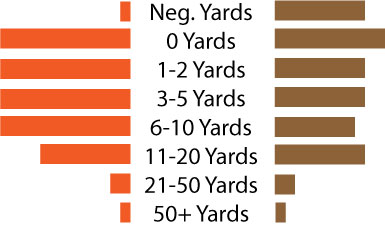 My question for the BC readership: what do you think about this distribution? Texas and Wyoming had the same number of plays go for (A) 11-20 yards, (B) 21-50 yards, and (C) 51+ yards. Bad Omen? Sign of a smart play-caller taking pressure off a young QB? Overly conservative playcalling? Something else?

David Ash during the post-game conference:

On making good decisions: Well, you know, a lot of that comes with understanding the situation you're in. It's situational football. You don't want to force it on third down. You don't want to force it on first down. You want to be able to understand first down, if it's not there, get four yards, play second and six, that's easy. On third down and five, you don't want to try to force the deep ball. You just want to look how can I get five yards. You don't want to get emotional like, "Man, I've only thrown one touchdown this game. I've only done this this game. I want to go for the big ball." All you can think about is how am I going to get this team five yards. And that's the only question.