One of our former writers famous for his overrated contributions to 19th century realism likes to watch a show on HGTV called Toddlers & Tiaras, where overzealous parents try to make up for their dearth of life achievements by foisting that responsibility on their toddlers, whom they enter in beauty pageants held in empty strip mall rental spaces. We'll modify that theme slightly to give out weekly awards. If you've been around here awhile, you already know the value of a BC Tote Bag.

Tiaras are also head ornaments that Aggies wear to bed to stimulate foreplay with their wives because it worked one time in fishcamp with a farm animal.

You don't want one of these.

Thankfully there were few to hand out this week because not only is the Big 12 still undefeated for the 2012 season, the average margin of victory in week 1 was 30 ppg, aided by the Pokes 84-0 smoove ass backwards rollerblade over Savannah State, who is a 70.5 pt dog to FSU this weekend.

Throw this query in your Siri: If Savannah played SMU, would they win?

A: I AM SORRY I CANNOT ANSWER THAT QUESTION UNLESS BOTH TEAMS ARE ALLOWED TO LOSE

As good as Nick Florence looked on Saturday in his first game as a starter for the Bears, the Mustangs were just that bad. Garrett Gilbert is still a twitchy pick machine and June Jones continues to give the notion of playing defense the Hawaii treatment:

Mahalo, the endzone is yours!

I envy Art Briles' ability to recruit and coach the skill positions but that defense won't be able to stop the top teams in the Big 12, currently sitting in this definite order after week one:

West Virginia - Geno Smith went XXY+toggle+C=5TOUCHDOWNZ all over Marshall. They do an excellent job getting the ball to their WRs on the move, who are mountain witches in space. However, I was too busy watching the Geno & Holgo Show to notice the Mountaineers defense also gave up 34 points.Maybe something to keep an eye on.

Texas - Because defense still wins championships, and despite some early hiccups against a frisky Wyoming team, Texas still has a damn good one. Hicks and Vacarro will shore up the back seven in short order. You'd rather have communication issues than a shortage of depth or talent. It's also nice to see Mack Brown's "concerns" that "scare him to death at night" validated by a sub-par performance in game one because he gets to take credit for being right in the press conference and share those very private moments with us. It's still baby steps for the Texas offense and Bob Wiley, but the kind that could some day soon offer scissor kicks to the nuts when caught sleeping.

Oklahoma State - You'll earn no bonus points from us, sirs, for that uncomfortable boxscore beatdown. You'll have to earn it against a middling Pac 12 team like Arizona laying early season double digit road chalk (easy cover, imo). What we did learn: Lunt is accurate against air and Savannah DBs. Randle is still fast as shit and finds the endzone on every third carry. (9 / 106 yards / 3 TDs). Lay the points until proven otherwise. The unsung hero in Stillwater remains Joe Wickline. He must really love that town.

Baylor - This here tote bag granted reluctantly, for reasons stated above. Enjoy it now, Bears. Go shopping with it, breathe in its canvas musk during prayer, and use it to collect charitable donations because it will soon be taken from you in savage fashion, Lord of the Flies-style. The Reckoning on the Brazos is near.

K. State - Klein & Co rushed for 345 yards against Missouri State, ripping off 35 unanswered points. Bill Snyder was not impressed. Still the best coached team in the Big 12 and clearly still practicing dark magic. Some day soon the Cats will get blown out by 28 and we'll run a continuous loop of CATLAB videos for the next 24 hours.

Iowa State - Yes, the sighclones only won by 15 but they came back in true Paul Rhoads fashion. The halftime speech usually goes like this: Sometimes when you split your scrotum in your zipper, you gotta just patch it up and get back to work, son! And that's exactly what Iowa State did, ripping off 24 straight points after surrendering an early lead to Tulsa. Steele Jantz continues to dazzle the heartland. Enjoy the time you get to spend with him once a year on your television when Iowa State plays Texas.

Texas State - Honorary Tote Bag for sending Cougar High back to the shadows of C-USA while earning their first win as a FBS school, as a 30 point dog no less. How does the saying go? You can take the Aggy out of a former coach, and some day he will start winning again. That day was Saturday. Take a bow, bobcats. [editor's note: if you haven't been to the Texas State campus while school is in session, it's recommended. 33,000 students, 65% of them hot babes that couldn't get into Texas, usually dunking themselves in a nearby river. The General lives in a tent just down the bend...]

Kansas & Texas Tech - just for winning your first game, that is enough for us. These things aren't guaranteed in Week 2. 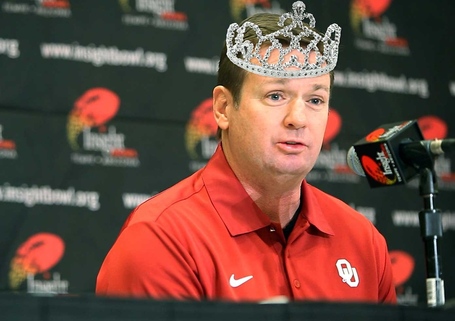 Does this make my chins look triple?

OU - We predicted problems for the OL and they came to marvelous fruition against UTEP of all teams, who trailed by 3 at one point late in the second half. The defense didn't give up any points, so Mike Stoops gets to keep his job another week, but their light-in-the-ass DL gave up 177 yards on 21 carries to a miner. The Sooners may have found a serviceable RB in JUCO transfer Damien Williams, who provided a nice burst off the bench for an unimpressive Dom Whaley. Despite lacking RB depth, last year's second leading rusher, Roy Finch, was moved to slot WR and didn't see the field. Landry Jones found preferred fauxhawk Kenny Stills for a deep 70 yard TD but Justin Brown and Trey Metoyer fizzled against UTEPs superior depth, talent, and scheme. THIS IS WHAT BOB STOOPS WANTS YOU TO BELIEVE. Don't fall for it. Like all of us, OU has issues. I just like ours better, so while the nation ranks them 4th, they only finish 4th in our conference poll. Know thine enemy? Fuck yes we do.

Billy Gillispie - Honorary Tiara because it would be a fitting punishment for the Big 12's resident smug, alcoholic prick. Everybody's fault but yours, eh BCG? I'd get an account on careerbuilder.com sooner than later.

Who do you like to get upset this weekend?