All content herein has been triple fact-checked by our editorial staff, who just returned from South Bend, California, and Hawaii with answers. Can an Oprah interview be far away?

Share All sharing options for: Timeline of the Manti Te'o / Lennay Kekua Relationship

An article recently published on the sports blog Deadspin reveals that superstar Notre Dame linebacker Manti Te'o's heartbreaking tale of an ill-fated long-distance girlfriend, Lennay Kekua, may have been a hoax. In the wake of this controversy, Barking Carnival has painstakingly reconstructed the timeline of the Te'o-Kekua relationship. 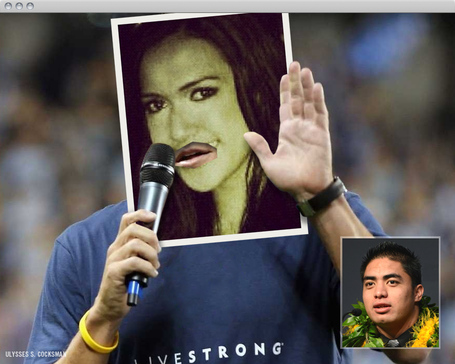 What does the future hold for Te'o and Kekua? Stay tuned to Barking Carnival for exclusive coverage of this adorable, mischievous twosome!