The gloves come off as The Texas Pregamer careens towards Dallas. Crimson and Cream stops in to kick the dead horse a few times. Hang on to your butts people - it's time for some good ole fashion hate: 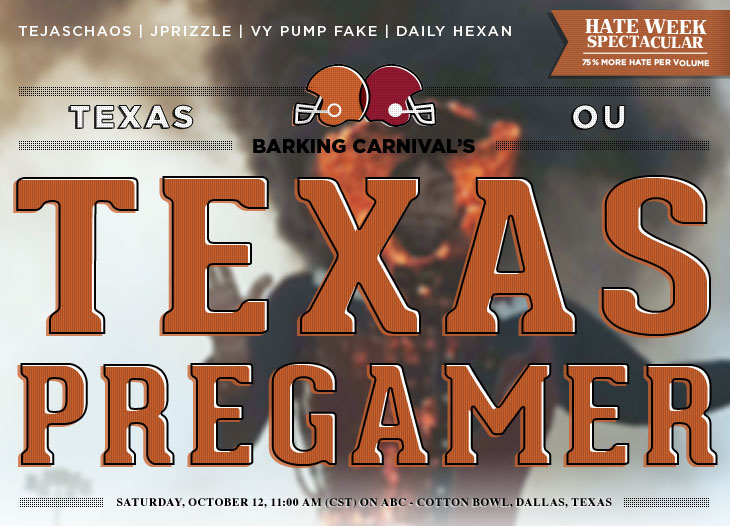 We're somewhere around Red Oak, doing 120 up the I-35 when the drugs begin to take hold, our stolen Mazda Miata dodging construction cones as we try to keep the wheel steady and shotgun our last Lone Star. Why? Because the government is shut down. And as far as we know that means no laws and no cops. That's how it works, right? Anyway, the way things have been going lately, we aim to misbehave.

Even the NSA is closed for business, which is why we can type things like Oklahoma is the Afghanistan of America. And let's put a jihad on OU. And Bob Stoops knew where Bin Laden was hiding the whole time.

We finish our beers and throw them out the window at an unsuspecting Baylor co-ed as the Miata powerslides through the Czech Stop front wall to resupply. Why? Because littering is legal now, we love a good jalapeño sausage kolache, and screw Baylor - it's time to talk Red River Rivalry.

At some point in everyone's life, their mother tells them they shouldn't call people names. But in Oklahoma, you usually don't get that advice. And that mother is also your cousin. She's your Mothercousin. And she also wouldn't give you that other time-worn matronly maxim: "If you don't have anything nice to say, don't say anything at all." Well, sorry Mom, we don't have anything nice to say about OU during hate week. And we've got a word count to hit.

Sure, Texas may not be the program it once was, but Oklahoma is still the program it always wasn't never not. Shady, trashy, morally repugnant, disease-riddled, ugly, filthy, illiterate, slovenly, pediculous.

We don't care if that one didn't make sense, because Oklahoma is populated by hunch-backed Cleatuses, twisted-spined Waynetrelles, crooked-coccyxed Bobby-Jo-Toby-Keiths, and other rednecks with back problems.

Hillbilly sons of bitches. The lot of ‘em.

That is our preview for the week.

NORMAN, Oklahoma: It turns out not everything's coming up crimson in Norman, at least not this time of month. Yes, the very nature of this once proud center of learning and tire repair annex is under attack from within.

I'm sure I don't need to tell any of you, the Pride of Oklahoma marching band has come under new leadership this year. Yes, new director Justin Stolarik SAYS he knows what's best for the band. But his highfalutin (flute-ing?) ideas are playing a sour chord amongst band alumni. 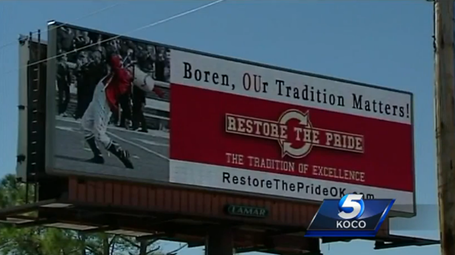 Kirby Swinney is concerned that the new drill style will leave students with no practical experience for marching after graduation. Which is very important skill in this tough marching economy. Nick Nicholson (real name) isn't sure the new director has the education necessary to run the band.

Oh - did we mention that Director Stolarik has a music masters and doctorate from UT Austin? Cause he totally does. And this is now our favorite story of the year. 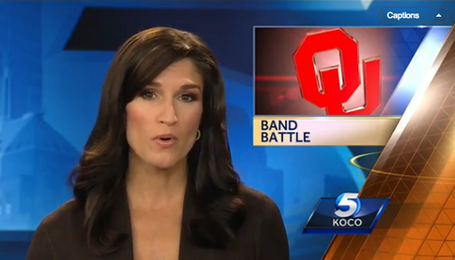 (what's more improbable: this is a real story, or Oklahoma news affiliate is called KOCO?)

When local news affiliate KOCO went to Norman to do some investigative reporting of their own, they found the student body was either unaware of the issue or "really didn't have an opinion." And isn't that the saddest news of all? 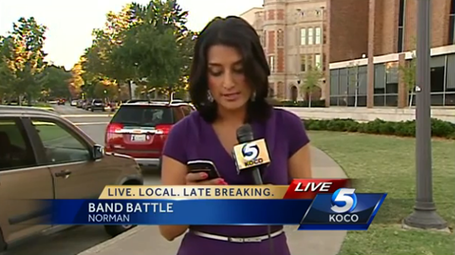 (she can't believe her career has fallen this far)

Concerned alumni are distributing fliers asking fans not to cheer for the band when they perform this year. And in the spirit of sportsmanship, we at The Pregamer will try our hardest not to clap. 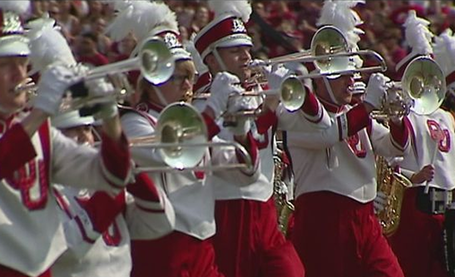 (they're crying on the inside)

By now, you know the drill. Parents name their kids. Raise them for 18 years. Send them to play college football against UT. We mock them down a peg or two. Usually results in their play suffering because, on that crucial 4th and 1, their mind is elsewhere thinking "But why did the Pregamer say I'm a douchebag?"

Here are some players you better know:

AMES, Iowa: Local Sack N' Save cashier Alex Steiger's outlook on life received an unexpected boost Friday from none other than expert motivator Paul Rhoads. "We were really down after losing the best regional checkout award to store 87 in Des Moine," said Steiger. "But Coach, well, he really went to bat for us." Paul Rhoads, a long time "sackhead" and current head coach of the Iowa State football team, spent all night Thursday fuming over video evidence that he claims proves the superiority of the Ames store. "These guys - " said Rhoads, tears cascading from both eyes, "these guys fought so hard. To have it...stolen by someone. I can't tolerate this."

The International Commission of Grocers and Grocery Handlers has yet to weigh in on the matter, but it's possible the highly emotional coach will no longer be eligible for Double Discount Tuesdays.

COLUMBIA, South Carolina: BREAKING - All world defensive end Jadeveon Clowney, who had just ordered the surf-and-turf, decided at the last minute skip the side salad. "He really should have said something sooner," said Steve Spurrious, the head waiter. "We had already prepared the salad for his plate and everything." Obviously, Clowney will NEVER EAT VEGETABLES AGAIN. Why do you hate the American farmer, Clowney? Why?

LOS ANGELES, California: Pokemon fans worldwide were shocked when Nintendo president Satoru Iwata announced the abrupt cancellation of the first ever 3D Pokemon game. It turns out, Mike Evans had already Caught Them All.

I find myself with a strange feeling as we head into #TexasHateWeek and I can only assume I am not alone amongst my fellow OU fans. It's somewhat uncomfortable and not something we're accustomed to feeling for our hated rival to the South.

Typically this is a week for we as OU fans to revel in the misery that life must surely be for a Texas Longhorn fan. It's a week for those either in crimson or burnt orange where 'hating' someone or something isn't frowned upon (at least not by those with a sense of humor). We are encouraged to insult one another.

I could enjoy the fact that the game has so clearly passed by your CEO head coach that this picture... ...and the far off in the distance, confused, really just helpless look in Mack's eyes will be something that comforts me for many years to come.

I could remind you that with all of your school's inherent advantages and built in recruiting ties, your coaching staff as done about as piss poor a job developing four & five star talent as is humanly possible.

Sure I could tell you any and/or all of these things among many others, but I wouldn't be telling you anything you didn't already know.

To that point, and with the premise firmly in place that this week is about insulting one another, I'll simply leave you with what I can only presume, on this week of all weeks, will be the greatest insult of all.

I can't speak for all OU fans as I'm quite sure a number of them will disagree with that sentiment considering we all do enjoy watching the Longhorns struggle. But if you really sit back and consider what it means and just how much it actually takes for an OU fan to feel sorry for Texas, my friends I can think of no greater insult.

Pity. That's what we have for you this week UT fans. There will be hate. Oh, there will always be hate. But it won't quite be the same as it's been in years past and damn you for taking that away from us. Damn you straight to hell. 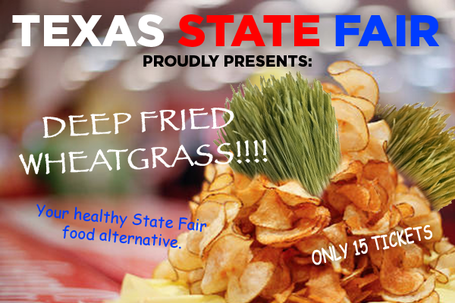 TejasChaos: Texas brings home the gold - lettering on their uniforms. I continue to cry myself to sleep.

JPrizzle: 20-21. Beers that will be needed to get me through the day.

Daily Hexan: Yeah, but at the end of the day, who won the recruiting battle? Scoreboard.

VY Pumpfake: Texas wins the battle of which state this game is being played in.