The Pregamer prepares for the Metroplex Double Header against TCU, and Hawkeyedfrog wrote us a script. It's shockingly realistic.

Share All sharing options for: The Texas Pregamer: TCU 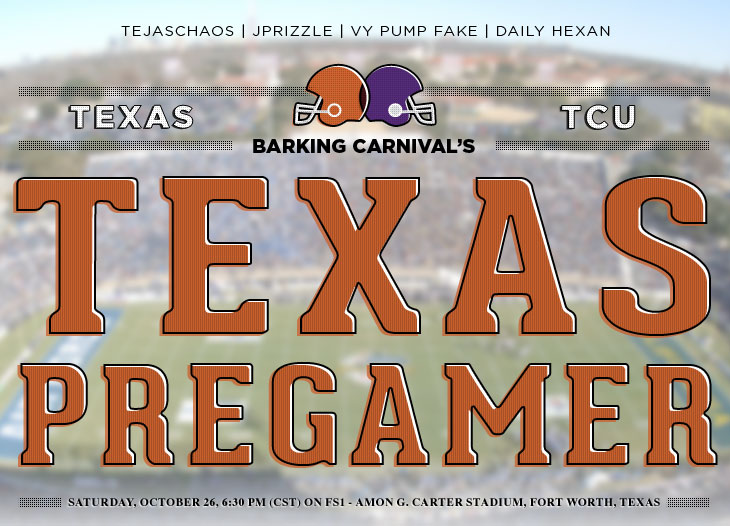 See No Evil. Hear No Evil.

Under 15 feet of concrete, somewhere in the San Bernardino Mountains, the Texas Pregamer Freedom® Bunker was prepared for just about anything. We'd converted all our cash into Franklin BBQ futures and were somberly awaiting the OU bloodbath, large-scale government shutdown fallout, or apocalypse.

A few days into our sequester and the sky hadn't blackened out from Big Tex flames or a Matrix style blotting out of the sun, so we did the only logical thing and began the long trek back to civilization in hopes of a hangover cure. An hour into the valley and the phones began to vibrate.

Eyes closed, resolve steeled for impact, sighs collectively escaped our lips. It was time to face the news and absorb the poorly worded, broken English, misspelled gloat texts from our friends across the border. One slide to unlock, a moment to comprehend, and HAHAHAHAHAHAHAHA. Suck on that Stoopsie. Poop on Stoops! JUST LIKE WE ALWAYS SUSPECTED! DEFINITELY NOT ALL OF US PICKED OU LAST WEEK! SWAG. #SWAG #YOLonghornO #BIGDISNOTJUSTACITY!!!!1$1

Honestly, we don't know what to say. It might come as a surprise to #PregamerNation, but we may have written a lot of this article in advance. So back to the drawing board, let's see. In a closely contested matchup, Case McCoy manages one magical, pinballing run to set up a field goal late? No... In a controversial last second call by Big 12 officials, Texas squeaks out victorious? Not that either huh? Blake Bell and that other running QB leave the game hurt after some mobile-home-related shenanigans? That's gotta be it, ‘cause surely they'd just run it down the middle the whole game. Wait-how many pass attempts? And Chris Whaley?

You don't mean to tell me... ...we OUTCOACHED Bobster McStoops? Woah. If all it took was the implosion of his legacy, a few pitchforks, and some kerosene-soaked torches at his door to get the game of Mack's coaching career, maybe we should have tried this sooner (hah sooner, lolz)

Whew. We need air. Maybe the apocalypse did happen. Maybe Ted Cruz got some nacho cheese on the nukes and we all exploded and this is heaven...

Which is a great lead into this week's opponent, Texas Christian. Sure, the season hasn't quite opened the way TCU would have liked, but they still field a quarterback who, barring #OUStrategy, can run circles around our biggest weakness. Vegas says the odds are against Texas and that we will come crashing back to reality Saturday. But you know what? Who cares. We aren't so confident in reality as a whole concept right now anyway. We beat a 14 point favored OU, anything can happen baby.

WACO, Texas - Art Briles was caught early Sunday sneaking extra points out of the Bears strategic point stockpile under soon to be retired Floyd Casey stadium. "I don't see what the big deal is," replied the coach of the nations top scoring offense, "Most of these points were saved up during the 90s, and they expire before the opening of the new stadium. It's either use ‘em or lose ‘em." Local scientists warn that excessive point waste could lead to a nationwide scoring shortage, but Coach Briles isn't worried. "There's a lot of points down there. I mean A LOT of points. Frankly, I'm not sure why the previous coaches were so hesitant to use em."

COLLEGE STATION, Texas. - After months of fact checking by the NCAA compliance board into conflicting rumors surrounding the A&M football program, there has been a final ruling. Mike Evans favorite condiment is in fact Catch-up.

EUGENE, Oregon - A small but passionate part of the Oregon Duck fanbase is protesting the bright pink helmets the players wore last week to raise awareness for cancer research. Because if there's one thing a player at Oregon would never have expected on joining the team, it's wearing crazily colored uniform combos.

CLEMSON, S. Carolina - FSU QB Jameis Winston turned in a signature performance against an overmatched Clemson defense, moving him up to #2 in best quarterback smile watch.

SEC COUNTRY, USA - Everyone loses. Urban Meyer, from the comfort of his home in B1G COUNTRY, stokes the coals, takes another swig of Macallan, and chuckles to himself.

There's nothing to worry about, Texas won't fire Mack.

You say that, and as long as he's clapping his hands and talking about nine or ten win seasons like they're conference championships I'm right there with you. But they just got rolled by BYU, that makes people angry.

Still that's no guarantee that they'll end up going after Patterson. Plenty of coaches out there that'd love to coach at Texas.

Do you want to see what Patterson could do with a UT recruiting class?

So we're going to have to work together to make sure that that never happens.

Well... I suppose I could call in a favor and arrange for the officials to make sure Texas benefits from any close call.

I think we're going to need more than that this time.

But if DeLoss retires Mack may decide to do his clapping from the AD seat and we're in the same boat.

Damn. I didn't want to do this, but we're going to have to make Patterson unhireable as well. Anderson, get in here!

You wanted to see me, sir?

Casey's out for the year, how are we going to win games with him gone?

That's what any coach with even a basic understanding of football would do I guess.

Jarret, how would you like to be a head coach someday?

Well those kind of dreams don't come true if you do what any coach would do. You've got to be exceptional, take risks, you know?

I never thought of it that way, coach. How can I stand out?

Really? Wow, okay. But... Trevone can barely throw a slant.

Overcoming the limitations of your players.

Yep, ADs look for that too. Almost as much as coming from behind.

If I were a young guy looking for my big break I'd make sure we trailed at the half every time. The worse you look in the first half the more impressive it is when you come back in the second.

They do always replay big comebacks on ESPN...

It's for the greater good.

- After the Red River Shootout -

They thought old Mack had lost it, but I'm so proud of my guys right now. Great game, coach Stoops. I smell ten wins!

See you next year, Coach... and many more. 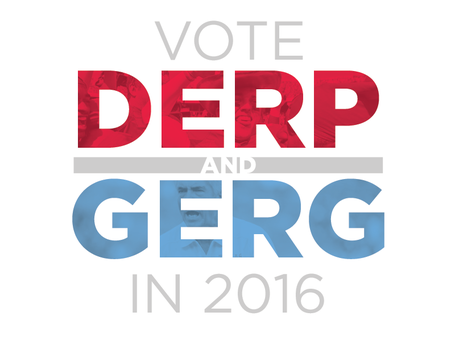 TejasChaos: I'm 1-4 picking UT games this year, so why not keep up the streak? Hornfroggers.

Case McCoy on why TCU is favorite vs. Texas: "Probably because I'm the quarterback, right?"