Texas has won six straight against overmatched opponents, but it’s about to get real. No. 12 Oklahoma State will be the best team we’ve played this year. They opened as a 3-point road favorite and the margin will probably get bigger. We just lost our starting running back and a defensive tackle for the season. So what can we do?

The Cowboys’ offense has changed some over the course of the season. Since senior quarterback Clint Chelf took over for J.W. Walsh, OK State’s run game has somewhat moved away from the read option and QB draws, though Chelf is a capable runner. Don’t be fooled by Chelf’s completion percentage (50.7%) — he throws a great spiral, is usually accurate and has a strong arm. OSU has had a lot of dropped passes and only an average rushing attack.

The OSU run game is led by 6’2" 210-pound junior Desmond Roland. He’s not fast but he doesn’t go down easily. There’s also Jeremy Smith, who is similar to Roland stylistically, and true freshman Rennie Childs (5’10" 180 lbs.). Childs has seen most of his limited action late in games, but his speed gives OSU the best chance to run outside the tackles.

With Chelf taking snaps, OSU’s run game has revolved around split zone and outside zone. Sometimes Roland and Smith are both in the backfield, but often there’s a fullback. (Side note: Senior fullback Kye Staley hasn’t been great in the games I’ve seen, but he was a beast against us last year.) Expect to see OSU test us on the edge with outside zone early and often. I don't think they'll have much success running between the tackles unless they're able to spread us out with four-wide sets.

In the passing game, Tracy Moore is this year’s big OSU WR. The senior is 6’2" 215 lbs. and runs in the 4.55 to 4.60 range. Moore lines up in the slot and almost plays like a flex TE at times. I expect we’ll put Adrian Phillips on him whenever we can. After Moore, there’s redshirt freshman WR Jhajuan Seales (6’2" 185 lbs.) and senior Charlie Moore (6'2" 202 lbs.). Both play outside — Seales is probably a step or two faster than Tracy Moore, and though the other Moore doesn't get a ton of looks, his size gave TCU's Jason Verrett fits on a couple of plays.

One bit of news to watch will be the status of junior slot receiver Josh Stewart. Stewart is OSU’s big-play guy, sort of a mash-up of Jaxon Shipley and Daje Johnson. After spraining an ankle against Kansas last week, it seems unlikely that Stewart will play; if he does, he won't be 100%. Instead, we should see David Glidden, a scrappy gym rat-type, in the slot. He doesn't look like an easy matchup, but I trust that Quandre Diggs can limit his big plays.

The offensive line has been shaky, but after a few changes it looks like it’s improving. Due to injuries, they switched junior Daniel Koenig from right to left tackle. Koenig appears to be the weakest link on the line, and his backup on the right side has had his struggles, at least in pass protection, as well. OSU hasn’t given up many sacks, but if you’ve seen Texas play in the past few weeks I don’t need to tell you that problems at the tackle position are a disaster waiting to happen.

OSU will want to attack our linebackers. We’ll see mostly two-back or four-wide (likely 3x1) sets. I think Gerg will keep us in mostly 4-3 and occasionally nickel personnel with Phillips in the box, playing lots of three-deep zone (Cover 3) and man coverage with one deep safety (Cover 1). We’ll probably tend toward Cover 3 since, unlike most of the QBs we’ve faced this year, Chelf can actually throw deep and has big receivers on the other end, but OSU really struggled with Cover 1 in the games I saw. I hope we challenge their receivers, especially since (aside from Stewart) they aren’t really the type to run by you, but don’t be surprised if we’re giving up the quick game like we did vs. WVU.

The primary way OSU will attack us in the passing game is with play-action passes to the seams and slants to the outside. 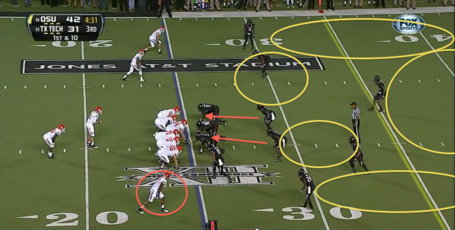 On this play, Tech brings a safety into the box and is blitzing all three linebackers. With one deep safety, the corners are playing loose, and the play-action freezes the underneath defenders. This is almost the exact look we were in when a West Virginia receiver took a slant 72 yards against Duke Thomas. 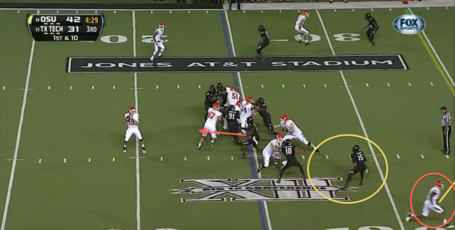 The safety is still near the line after the fake and Seales is breaking on the slant. If the corner misses the tackle — which is very possible considering Seales’ size — and the free safety takes a poor angle, this is going to the house. Tech is fortunate on this play that the blitz doesn’t get picked up and the ball is batted at the line.

OSU will also use Stewart or, if he can’t go, Glidden to attack the edge with screens and then use the threat of that to throw to the seam. 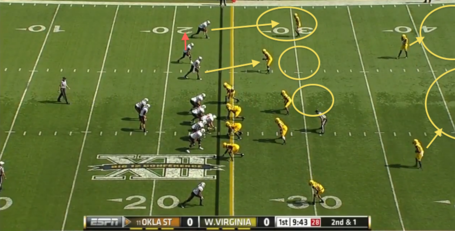 In this game against West Virginia, Stewart is the No. 2 receiver in a 3x1 set. Tracy Moore is lined up as No. 3, and although it doesn’t matter on this play, that’s Seales in a one-on-one matchup at the bottom. Stewart is going to run a bubble screen while Moore and the No. 1 receiver fake like they’re going to block. Meanwhile, WVU rotates the coverage to the trips side to address the threat of the screen. This was a change-up to their usual adjustment to trips. 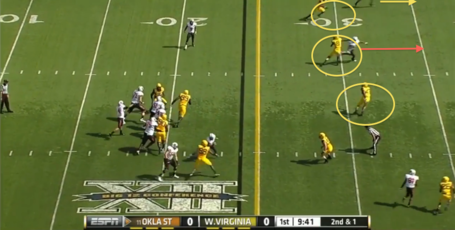 Rather than block, No. 1 and No. 3 blow past the defenders while Walsh pump-fakes to Stewart. Walsh anticipates Moore breaking free behind the DB and throws his way. There’s a safety over the top but he isn’t going to make this play, and even if he gets a good break on the ball, Moore is a big man to be stealing a pass from. On this particular play you can see why Walsh was benched, but you also see a big reason Chelf hasn’t been completing more passes — the throw isn’t good, but Moore also drops it. Let’s hope we get the same results.

One last concept we’ll almost certainly see once or twice when we’re in man coverage is the rail route from the backfield. 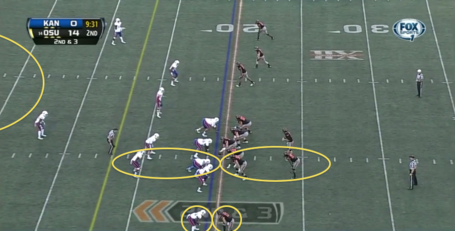 You might remember this from OU’s first drive in the Red River Shootout — Brennan Clay beat Steve Edmond to the end zone and dropped the easy touchdown. 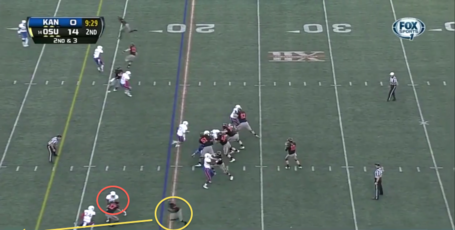 The WR will run a slant or hitch to try to pick the LB, but even without the pick, Edmond or Dalton Santos on any back running down the sideline is not a desirable matchup, especially if they use Childs here. Unless the corner sees it coming and can break off in pursuit, this won’t go well for us. It didn’t go well for Kansas either.

Assuming we’re going to continue to base out of single-high coverages, I like Cover 1 over Cover 3 in this game. I’m not worried about OSU’s receivers blowing past Byndom or Thomas; I’ve seen them struggle to get off tight man coverage; I like our ability to disrupt throws with man pressure; and I don’t want Seales or Moore — either one — catching easy passes with a cushion against our inexperienced (Thomas) and comparatively undersized corners. That said, we're probably going to run a ton of Cover 3.

I don't expect OSU to have success running inside. They could try their diamond package, but I think that just plays to our strengths inside. Instead I expect them to try to attack the edge. Any success there will increase the effect of play-action on our already slow linebackers, widening the holes in Cover 3. We’re probably going to give up a few big plays in the passing game. Their receivers, save Glidden, all will have a height advantage and will probably win a jump ball or two, and there's a good chance we'll miss a tackle at some point on the outside. Still, Chelf, though he is a competent passer, has shown he’ll predetermine where he’s going and will force throws. It’s also a safe bet we’ll continue the trend of having at least one big play a week off fire zone blitzes. If we can use pressure to force some bad throws, tackle well in the secondary and maybe get another strip-sack, we’ll be in good shape — but I don’t expect OSU to score less than 27 points (though I'm expecting a special teams or defensive touchdown). I'll discuss our chances of also scoring more than 27 points later this week.