Share All sharing options for: The Texas Pregamer: Texas Tech 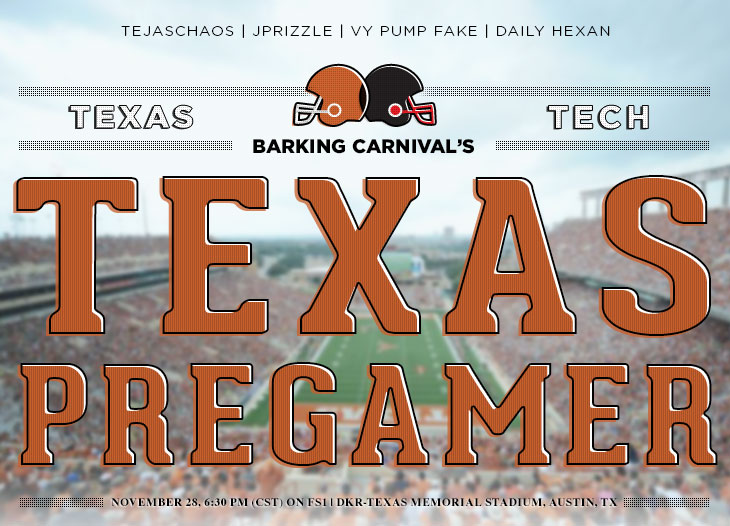 That went about as expected. The 6 week honeymoon abruptly ended as our boys in burnt orange faced the unthinkable last game: a competent spread offense and legitimate QB run threat. Thank Bevo there isn't another one of those on the schedule...

Thanksgiving, what an interesting holiday. As the years fade and people move out of your life - new careers, new conferences - the faces around the dinner table slowly change. Last year the overly religious cousin from Fort Worth spent the whole meal critiquing Ma Brown's Turkey Day spread, then scarfed down the last slice of pecan pie anyway. This year, the side of the family Mom never talks about is driving in from West Texas via pickup-towed camper, a 4000-count box of tortillas lashed to the top via maternity pant elastic bands and fishing wire. The tortillas? Not for consumption. We told you they were a little loopy.

Now here at the Pregamer, we don't normally concern ourselves with the comings and goings of West Texans. However, the word on the street is the Red Raiders have a new coach this year - apparently they threw some money at an alum in a desperate attempt to fill the pirate-shaped empty, dark, concussion-healing closet in their hearts. Well, we've got news for you, Techies. It can't be filled. One does not simply walk into... 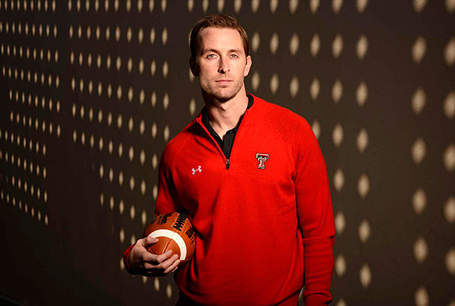 ...oh. Hey there. Got to hand it to the new coach, he sure knows how to pick his graduate assistants. Wait. That's the new guy? Well, it would seem that Texas Tech has hired one Kliff Kingsbury. Wikipedia says he used to play football there or something. 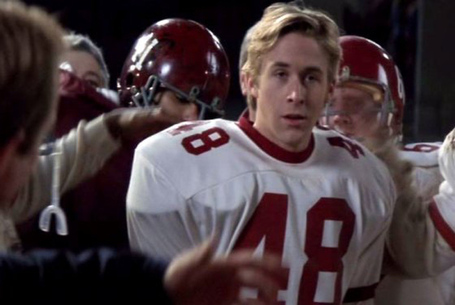 Ok, so maybe he's a little easier on the eyes than Tuberville. Or Kate Hudson. But whatever. It's not like we're impressed by his aww shucks personality and spread credentials. We haven't spent a moment thinking about the guy all year. Promise. Why, did he say something?

Woah. One minute we were discussing our chances to finish out the season strong, the next we're buying a red zip-up at Patagonia.com. You think he would like one? No reason.

Where were we? Oh yeah - the Pokes were kind enough to spot us a victory by derailing the Flaming Bear Car on Saturday. So we are, technically, tied for first place right now.

If we walk away from our turkey date (we can call it a date right?) with the win, all we'll need for the Big 12 championship is OkState to lose Bedlam and for us to beat Baylor. If I would have told you that 10 years ago, I'm pretty sure you would be calling Nan Nan about her timeshare in Glendale.

Let's not forget that UT is undefeated this year in games in which we are not ranked. See! It's all part of the plan. Expect us when you don't expect us. It's what's expected. Of us we mean.

The turkey is stuffed and dressed to the nines (Ray-Bans and all). We've got a benevolent governing organization (NCAA), a likeable dynasty (Saban, ‘Bama), and a solidified UT coaching situation. So gather around the table, join hands, and give thanks.

Solving the Mysteries of Lubbock County

Not only am I a proud Red Raider, I also grew up in Lubbock County and lived in the Hub City for 26 glorious years. I'd like to thank the fine gentlemen of Barking Carnival for allowing me this opportunity to dispel some of the rumors and bust some of the myths that have plagued my hometown for years. I know the truth because I saw things.

People say there is nothing to do in Lubbock. Tell that to me when I was 20 years old and I'd take the ladies out on the dirt roads and we'd drink gallon after gallon of Purple Passion and listen to Pearl Jam and party. Myth busted.

People say the Lubbock economy is propped up by firecracker stands and meth labs. Those two aren't even in the top three industries as drivers of economic growth in the city. Myth busted.

People say that Lubbock will never grow into a major metropolis. Well those people are idiots. Lubbock is the 2nd fastest growing city in Lubbock County. Myth busted.

You think the fans at Jones Stadium are rude? Someone threw a whiskey glass at my head in Boulder once. Also, my friends and I got kicked out of an establishment of ill repute in Dallas for trying to start a fight with Too Tall Jones just because he is Too Tall Jones and it would've been a helluva story, but no, the bouncers had to be rude jerks. Myth busted.

I know some dudes in College Station that got an STD because they like to ride see saws. Myth busted.

People say that everyone in Lubbock got pregnant the night Kliff Kingsbury was hired but my grandma still lives there with her pet foxes and she's not pregnant. Myth busted.

And finally, I found a statistical report given to the City of Lubbock in March 2011.

In the summary I found these interesting tidbits:

The only logical conclusion to those bullet points is that not every Lubbock resident owns a wolf howling at the moon t-shirt. Myth busted.

So again, thank you for letting me come over and bust the hell outta all these crazy myths. Do me a favor and next time someone spouts off something dumb about my hometown send ‘em my way on Twitter.

Now you can go back to sitting in traffic on 35, while the folks in Lubbock are already home, counting their piles of cotton money.

DailyHexan: Surely Kliff has caught the Raider Rash by now, right. That kind of itchy...trigger finger will definitely factor into a close game. Horns by 7.

Tejas Chaos: I humbly accept full responsibility for the OkState loss. I forgot to pick against Mack in my forecast, and even though I edited the page later there can be no other reason our team lost. It is my burden to bear. So I shall. TEXAS TECH WINS BY 500. Kliff signs with Death Jam Records and goes platinum by halftime.

JPrizzle: Case McCoy gets injured in the 1st quarter. In a shocking twist, Garrett Gilbert's lil brother Griffin comes in and plays in his 1st every college game. He gets the job done. Texas wins 37-21. Brought to you by M. Night Shyamalan.

VY Pump Fake: Everyone is so enamored with the young, new Tech coach. I say hearken back my friends, our coach was young once too. The spirit of young Mack leads the Horns to a 31-24 victory.