Share All sharing options for: The Texas Pregamer: West Virginia 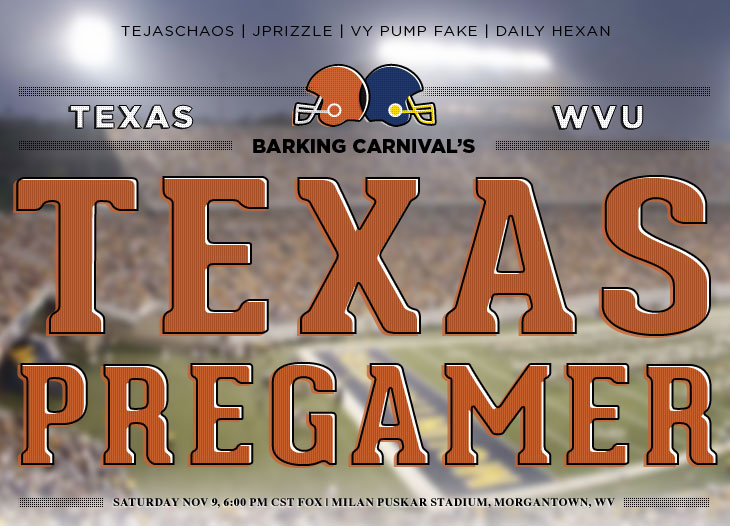 In Case of Fire:

This is usually the part of The Pregamer where we talk a little about how the previous week went and look forward to our next opponent. Today will not be that day.

We are going write about one man and one man only. Cause it's provocative and it gets the people going. 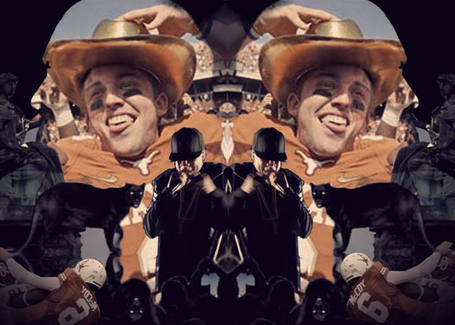 Has anyone else noticed that Case McCoy has turned the QB position into a kind of performance art piece? If Johnny Manziel is Al Pacino and Peyton Manning is Daniel Day Lewis, then Case must be something like Keanu Reeves. There's no method acting. No expressive display. He's not going to nab any hardware for the performance, but wouldn't you know it - he's totally pulling it off. 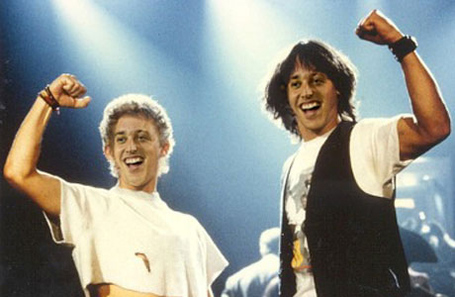 How did we get to this point? Much like the impending singularity, it all comes down to the exact moment the Moxie Train became self aware:

Case McCoy on why TCU is favorite vs. Texas: "Probably because I'm the quarterback, right?"

And of course this past week was not without its own Case moment:

This is a thing that totally happened. It takes a special kind of awareness and balance to fall that far and set up a TD. And it got even better after the game:

Case McCoy on final Malcolm Brown TD after he fell down handing it off: "I didn't get to see that touchdown. I was planking."

That broke Shaggy Bevo for at least an hour. DO YOU KNOW HOW HARD IT IS TO MESS WITH SHAGGY BEVO?

He is irrational confidence bottled. Entropy in a glass. On every play literally anything can happen. And I do mean anything. Our own Young Williams put it best:

"I can't think of anything in sports more entertaining than the 3.5 seconds when a Herp-A-Deep Ball is in the air. The possibilities are as endless as a frog-gobbling thunderstorm in Fort Worth on an October night."

Let's get one thing straight right now. There are no longer any "Case Rules." Things like Case don't have any rules. The moment you build a gameplan around them he starts chucking Hail Mary wheel routes to receivers you didn't know were in the 2 deep. And unfortunately, the moment you get excited about that, he'll throw a pick six to an uncovered defenseman. Some QBs just want to watch the world burn.

This week we get a second shot at WVU and Holgo. So fake spike it on third down. Ricochet a shovel pass off the nose tackle. Razzle Dazzle to Geoff Swaim. Everything is possible with Caseball in play. The good. The bad. And all the things between.

Who knows what this means for us competitively, but are you not entertained? Cause we sure are.

If there's one thing that appears to unite the Big 12, it's that everybody hates Texas. Call it envy, call it ambition, call it simple 'eat the rich' mentality. Nobody in the conference likes the Longhorns. In fact to my knowledge most of them HATE the Longhorns.

Not us. Hate Texas? Hell, we LOVE Texas. Amid a 14 month period of football struggles and basketball futility, Texas has often seemed to be the only place that the West Virginia Mountaineers and their fans can weigh themselves and not be found wanting.

The high water mark for Mountaineer football in 2012 came when a WVU team rolled into Darrell K. Royal - Texas Memorial Stadium, stared down the UT record crowd of 101,851, the booming drum, and Godzillatron to emerge with a historic win. Then the southwestern meat grinder chewed us up and spit us out and 14 months later we're still picking up the pieces.

It didn't get much better in basketball. A few months after a smirking Bob Huggins declared in the preseason "honestly, if we're the sixth best team in the league then it's a hell of a league" he found out that it was a hell of a league and his team was actually only 8th best. But once again the burnt orange was a refuge as a sweep of Rick Barnes' Texas hoops squad provided two rare moments of hardwood hope.
The winning wasn't limited to major sports, either. The men's baseball team won a big series in Austin, and the women's soccer and basketball teams got in on the action. In a time of the most significant change WVU's athletic department has seen in decades, those horns across the field or hardwood are a welcome sign. We've grown to love you, Texas.

We love you because somehow you make us the best version of ourselves. Andrew Buie ran for 200 yards against you. Hell Pat Miller (Pat Miller!) made a game-clinching pass breakup. Aaric Murray (Aaric Murray!!) made a game-winning shot to beat you. These are enigmatic up and down performers who have driven Mountaineer fans all half crazy, but somehow you get them to win and we love that about you.

You represent the dream of what every WVU fan wants WVU to be. Able to take on the biggest, baddest athletic department in the land and come out on top. Hell, we even managed to keep our athletic director out of your clutches (yes, I completely understand that it was your choice not his but IT'S MY NARRATIVE DAMMIT)!

So welcome to Morgantown, Texas. We're glad to have you and just wish you could visit more often. It's been a long strange trip through the Big 12 and we've taken our lumps, but we're ready. The loving arms of Bevo have never looked better.

via The Smoking Musket

DailyHexan: Holgo takes Oliver Luck out for celebratory moonshine, honor of him staying "in the state of Jesus, coal, and black bears." He is consequently drunker than usual, forgets he no longer has Geno Smith, scores a paltry 17 against Gerg. Horns 34-17.

TejasChaos: I’m not one for superstition, but my 0-5 in predictions has us 5-0. Let the winds roll. WVU by a Red Bull.

VY Pump Fake: Does anyone know what Manny Diaz’ reassignment was? Just curious. Oh, and Texas by 10.