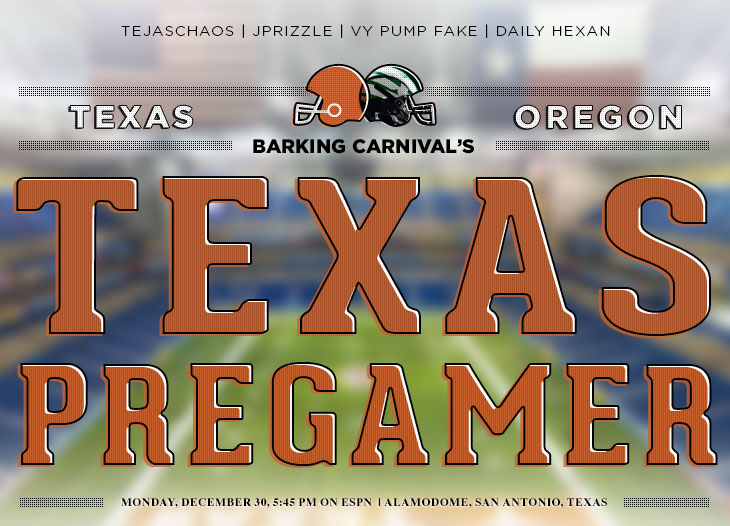 Now, The Pregamer has never been much for "The Feels." But, with the last day of Mack's tenure upon us we can't help but send some thanks to the ole ball coach. So thanks, Mack. We joke and we jab, and you made it a little easier as of late, but when we look back at your time at UT we wouldn't trade any of it. We will always have 4th and 5, and that one time you tummy tapped TejasChaos while leaving for post-game - a term of affection usually reserved for Linemen. Thanks for the body image issues.

Alright, with that exorcised, you don't need us to make the comparisons between the Alamo and Mack's last stand. I'm sure plenty of beat reporters have already told you that sort of thing. Instead we are going to compare the game to the failed British defense of Hong Kong via the ‘Gin Drinkers Line' in World War II. Not what you were expecting, huh? The British were overwhelmed by the Japanese, and the name has ‘gin drinkers' in it. Really, that's the entire merit of the comparison. As 13.5 point underdogs, we're pretty much expected to end up like the British - and we wanted to mention gin because, well, we'll be drinking a lot of it.

But The Pregamer has never been defeatist, and we won't start now. Just like Frosty, there must be some magic in that old Mack Brown we found. The Horns are looking to win back-to-back Alamo bowls which is totally something you can brag about over your weekly game of backgammon. Regardless, break out your cheese balls and crackers. Hang up your Texas flag. It's time to bid 2013, not to mention the Mack Brown era, adieu with yet another Texas bowl game. Go Horns & Hook ‘em.

The Next Mack Daddy

It's been awhile since the Longhorns have been in search of a new coach. It can be a little scary and hard to follow in this twitter engorged media of rumors and speculation. But never fear - the Texas Pregamer has confirmed from our intrepid sources or reddit, a narrowed down list of the following surefire, can't miss coaches that are totally coming to Texas. Unless they aren't. We'll blame Chip Brown, then credit him just so we can blame him again. If it's good enough for ESPN, it's good enough for us.

They say your rebound is everything your last crush wasn't. And Bobby P is that in spades. Remember how we never had to worry about Mack accidentally burning down Belmont or selling Bevo to the local Tony Roma's? B-O-R-I-N-G. In between sweet talking LHN correspondents, Petrino could literally be doing just about anything, messing with anyone. It also allows us to open back up the position of Head Coach in waiting, though in this case it's more of a batter on deck situation.

Sure, Lane Kiffin is a four letter word in many parts of the US, but are we being a bit unfair on the guy? Look at all the things he's had to overcome. Like, say, being Lane Kiffin. We already know he's thrifty and more than happy to take the bus to and from the stadium. He has experience dismantling teams at an NFL level. And no matter what happens, Lane always moves on to better digs. What better way to prove we are the best destination in all of sports but welcoming him into the burnt orange. Biggest drawback? Is Lane Kiffin.

Was Mack too kind, too caring for you? Then welcome your new robotic clapping overlord - the Coachatron 3000. With two standard deviations less feeling than your organic based coach, the C3000 is almost as uncaring as Nick Saban. And, conveniently, it runs on the state of Texas' most renewable resource - Jerry Jones' Hubris. Coachatron will not sleep. Coachatron will not tire. Coachatron will oversign faster than any SEC coach. We're talking grayshirt to get a grayshirt, here. He will eat your dog. He has a direct RSS feed to the greater works of Socrates, Sun Tzu, and Scipio Tex. He is your perfect robot coach. Just don't get him wet.

If you want to beat Saban, hand the headset to the man of his nightmares. With JFF's signature on the dotted line as the next Texas head coach, the YOLO SWAG train would exit the stratosphere. This is not to mention the fact we are super excited about the new moves BFF Drake will bring as Defensive Coordinator. We won't see much of Coach Football during the games mind you, but no one will much care as our mysterious freshman safety Manny Janzeil wins the Heisman.

Football is a kind of religion in Texas, so if our first few choices are unavailable, the leader of the entire Catholic Church seems like a reasonable fallback. The newly minted Time Magazine Man of the Year would really know how to market the LHN. The automatic win in 2015 against Notre Dame would be icing on the coronation cake.

An unconventional pick to be sure, being inanimate and all, but the mean green icon of Waco is in need of new digs, and we should welcome it with open arms. You thought cover 3 was good? Try covering 3000. Try doing it for decades. Nobody's talking about it, but ole Baylor tarp has been locking down entire sections of the Baylor fanbase. Imagine what it could do with a Texas-sized stadium of fair weather fandom. Plus, The Baylor Tarp is green, which really aligns well with the current eco friendly message the board of regents is going for.

TejasChaos: The always surprising indoor snowstorm fills the Alamodome, causes the refs to suspend the entire Duck team as a precaution. Texas wins by default as Mack deposits 5 million into the Swiss bank account of one Dr. Victor Fries.

VY Pump Fake: UT over Oregon 34-30. Mack rides off into sunset. Appropriately, crowd starts the most epic slow clap in history. At its peak, Mack joins in with a final clap and sheds a single tear. LHN sells movie rights. 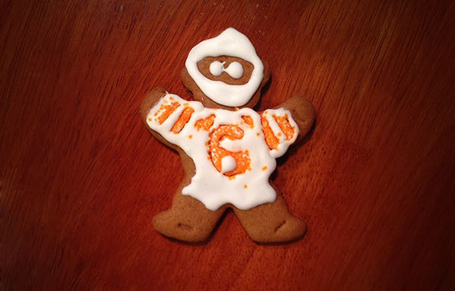