Five Keys For a Texas Longhorn Victory against the Oregon Ducks in the Valero Alamo Bowl on ESPN at 5:45 CST

Larry in Wichita, '86 UT MBA grad, just queried the headline into google and we have his answers right here, in real time.

Share All sharing options for: Five Keys For a Texas Longhorn Victory against the Oregon Ducks in the Valero Alamo Bowl on ESPN at 5:45 CST

And we are throwing in the SEO towel to help get Mack Brown one desperate, final win.

In every critical win of the Mack Brown era, which just surpassed the Triassic in duration, if you reviewed the tape of key victories early in the first quarter there was a classic Tell.

This is MISSILE LOCK MACK and not even Bob Stoops, Pete Carroll, Les Miles, or Val Kilmer could escape unharmed. That locker room scene in Top Gun where IceMan is swinging his brass balls and Tom Cruise is sizing them up for the takedown? That's Oregon thinking Texas has no shot. But they're already dead and don't even know it. But only if Mack locks in the knee bend, and ...

It sunk us in Provo. NC State in '99. Cotton bowls 2001-4. When Mack is nervous and unprepared, frantic arpeggios of clapping are his tonic. They come early and often, increasing in frequency, pace and gusto as the game gets terrifyingly out of hand. All that's left is the dyin' ... You generally want to save a measured clap clap clap for after coming back down 28 in Stillwater. 4th & 19 in Lawrence. One of those Schlumberger golf tourneys in north Houston where they scatter 18 high-end escorts just so fat guys in golf carts can give chase and bang them, greenside. (Oh you've never been invited? Just clap three times and click your Callaways. Incidentally, golf pricks are also incessant clappers.) The Major's Holiday Bowl comeback against the Huskies. Mangum's Michigan. Tucker's triumph in Aggieland. All were well-coordinated, patient, and perfectly fitting clap attacks.

Place them on all levels of the Alamodome. Navy Seal trained. Shoot to kill. 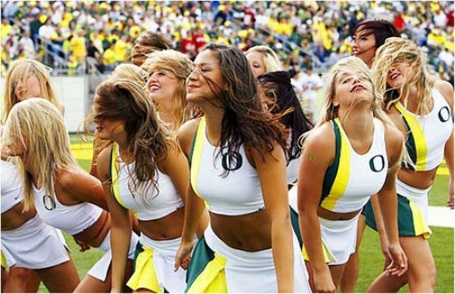 It will give us a much needed speed boost at the position and confuse Oregon DE's who have been told to never tackle an Oregon QB. Change back to burnt orange at halftime and hope 30 point cushion is sufficient. 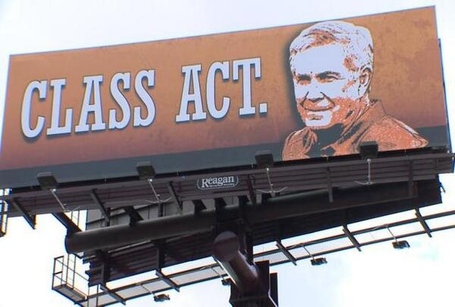 Even after Mack reluctantly got fired stepped down, a week later billboards started popping up around Austin, reminding Texas fans exactly what Mack's legacy would be. Because it's not up to us apparently, the fans, to decide these things. And it appears somebody forgot to turn off the Message Control Machine in Bellmont. To recap Mack's legacy:

That just doesn't read as well on a billboard, so CLASS ACT will have to suffice.

A key ingredient of every Mack Brown win. Whether or not Oregon wants to be there, the Ducks still want to beat Texas (because the Longhorns are their opponent in a college football game, the entire goal of which is to "win" by scoring more "points" than the other team). So we can expect Oregon to ride a wave of emotion, powered by their new uniforms, to an early lead. The Longhorns just needs to weather Oregon's adrenaline-fueled domination of the first three-and-a-half quarters, and count on the NFL-caliber talents of Anthony Fera and Nate Boyer to ultimately lead the Horns to victory.

If these players come through as expected, Oregon won't stand a chance. and 9-4 will have never looked so damn good. 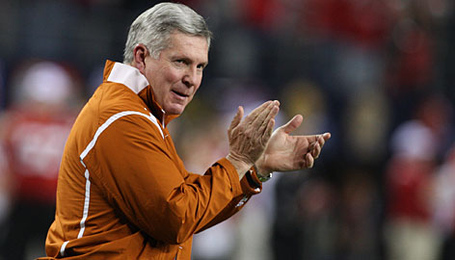