Not Upbeat about the Texas Longhorns Up-Tempo Offense

Share All sharing options for: Not Upbeat about the Texas Longhorns Up-Tempo Offense

This past February, Mack Brown announced that Texas would implement an up-tempo offense in 2013. According to Mack, inspiration struck during the Longhorns' thrilling loss to then-Top 10 West Virginia:

At the time, I was skeptical. Sure, an up-tempo offense would potentially increase the Longhorns' offensive production. But would this be a good fit for our personnel? Texas has spent three years recruiting players suited to a bruising Alabama / Boise State mash-up offense. And would a faster-paced offense only accentuate our weak defense? Shouldn't we be slowing the game down, ala Alabama, to keep Manny's sieve off the field? And why are we copying West Virginia, a team that finished 7-6?

These thoughts plagued me like text messages from Vasherized. So I opened a spreadsheet and started plugging in data from Texas's 2012 season, hoping to find reassuring statistical trends that would cure my insomnia.

Here's what I actually found.

1. Did up-tempo help our offense?

In 2012, the Longhorns' average time-per-play was positively correlated to all of the major offensive factors I looked at: total points scored by the Texas offense (correlation = 0.42); expected value per drive* (0.64); and yards-per-play differential as a percentage** (0.65). In other words, the slower the Texas offense played, the more points it scored per game, the more points it scored per drive, and the more yards it racked up on each play. The charts below illustrate the correlation between time-per-play and offensive production. 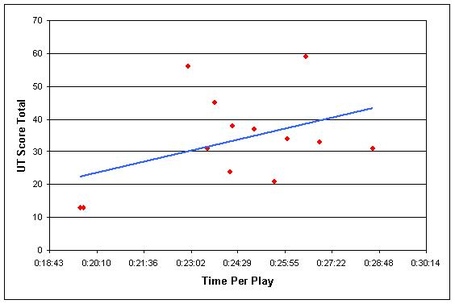 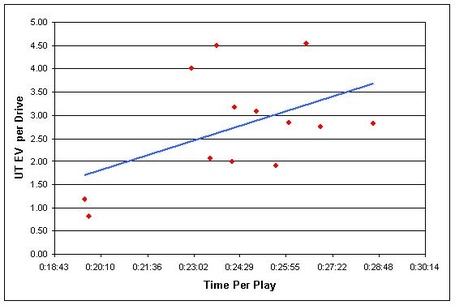 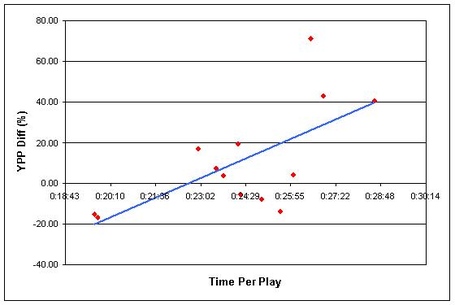 Those two dots on the lower left of each chart? OU and TCU, by far our two worst offensive games of the season. They were also by far our fastest-paced.

The yards-per-play differential chart is particularly compelling. When Texas slowed the game down, the Longhorn offense performed exceptionally well on this metric. When we sped up, our offensive production per play suffered.

Mack's publicly-stated rationale for switching to the up-tempo offense centered on increasing offensive production by wearing down opposing defenses. But the 2012 data reveals that when Texas goes to a higher pace, it does so at the expense of production on the per-play, per-drive, and per-game levels. In other words, going up-tempo had the exact opposite effect that Mack (and the fans) hope to achieve.

Unfortunately, there are even more reasons for concern.

2. Did up-tempo hurt the defense?

When Mack first announced his intention to install an up-tempo offense, I immediately questioned the move. Not because I doubted that it would increase offensive production -- until I ran the 2012 numbers, I assumed it would -- but because I feared speeding up the game would hurt our defense. The theory is that decreasing the time-per-play will typically shorten the length of offensive possessions, thus reducing the time the defense has to rest and regroup, thus diminishing the defense's effectiveness.

That theory has some appeal. But it lacks clear empirical support. The charts below illustrate the Texas defense's performance in 2012 on a per-game basis as a function of average time-per-play. 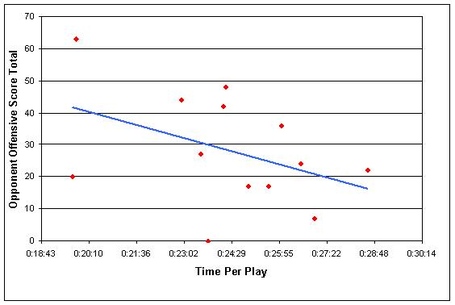 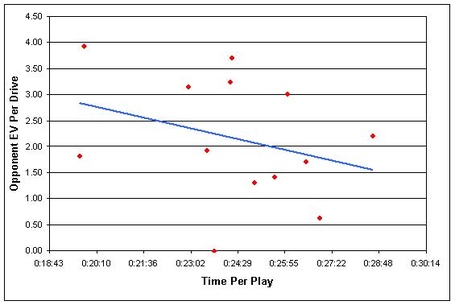 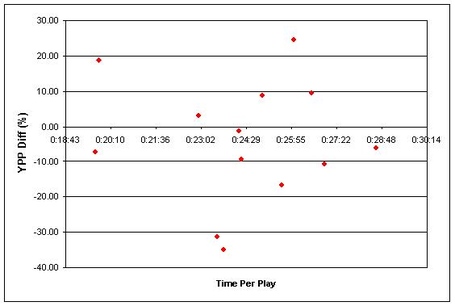 The first two charts show a significant (but not exceptionally strong) negative correlation between time-per-play and (a) total scoring by the opposing offense (correlation = -0.4) and (b) the opponent's expected value per possession (-0.3). In other words, as Texas increased the tempo of its offense, Texas's opponents tended to score more per game and per drive. If you ignore the TCU game, a seeming aberration, the negative correlation is even more striking: -0.6 for total offensive scoring, -0.43 for EV. Oof.

However, there is no discernable relation between time-per-play and differential yards-per-play (-0.03). This could indicate that the scoring statistics, which are not a differential over a baseline comparator, are misleading. Maybe Texas just happened to play at a faster pace against opponents who have relatively better offenses. As expected, these opponents scored more points against the Longhorns than did Texas's lesser opponents. But the statistics do not indicate a relationship between Texas's offensive pace and the ability of its opponent's offense to perform above or below its season-wide average.

On the flip side, going to a faster pace certainly didn't help our defense in 2012. So, if you're looking for an actual justification for switching to an up-tempo offense, it's not here.

But maybe I'm missing the big picture. Maybe, instead of harping on yards-per-play and expected value, I should focus on the results that matter. Maybe I should ask whether Texas wins games when it increases its offensive tempo. So here goes:

3. Did Texas win when it went up-tempo?

Here's a list of Texas's 2012 opponents arranged in order by time-per-play:

Texas was 6-0 in its six slowest-paced games. It was 3-4 in its seven fastest. The games against TCU and OU were both (a) Texas's fastest-paced games (by a good margin) and (b) Texas's most embarrassing losses. The Baylor game, #3 on the list, was a nail-biter that could easily have gone the other way. Ole Miss and Iowa State, two of Texas's three slowest-paced games, were arguably its most impressive wins on the season.

This may be the most damning argument against the up-tempo offense. Even if you don't buy into the relevance of statistical minutiae, you can't ignore final results. In 2012, when Texas went really fast, it got its ass handed to it. When Texas took its time, it won.

Which brings us to...

The shift to an up-tempo offense doesn't address the team's real issues and, if recent history is any indication, appears likely to create new ones. Last season, speeding up the pace reduced Texas's productivity, increased scoring by our opponents, and consequently reduced the likelihood of a Texas victory.

So, why did Mack decide to go up-tempo?

Fuck if I know. My best guess? Mack is flailing. He doesn't know what is broken and, even if he did, wouldn't know how to fix it. Coach Brown is falling back on solipsistic anecdotalism. His decision is based on his viewing a single team (West Virginia) use an up-tempo offense to pile up points against Texas (a team with a bad defense). Never mind that Texas is a very different team than West Virginia and that West Virginia finished the season 7-6. They were a Top 10 team when they came into Austin and beat us. We must BECOME THEM.

And that's where the program is. We're scrambling to emulate a barely-above-.500 team's up-tempo offense with personnel recruited for the exact opposite approach, all because that mediocre team shoved it down the throat of an awful defense in a game that our coach happened to watch.

Mack is just reliving his failed "copy Alabama" project of 2010, but with lower standards this time around. Fortunately for him, Texas fans' standards are lower now, too.