The philosophical and tactical changes the Longhorns are making on offense come with their share of benefits and constraints. This is decidedly not just an overclocked version of the offense we’ve run for the past two seasons. Instead, it’s an entirely different approach that happens to make use of many of the same concepts.

Share All sharing options for: Spring Clinging: A Primer

Although the coaching staff has referenced Oregon several times, Oklahoma State’s offense is probably a more helpful analog for what we are trying to accomplish. Most prominent among the changes are the standardization of QB alignment, the simplification of run concepts, use of spacing, inclusion of more run/pass packaged plays, reduction of player packaging, and of course speeding up the pace. We’ll get a glimpse of some of those in finer detail over the course of this series as well as check in on the defense and abstract some meaning. To be clear, this series isn’t meant as a series of conclusions. Instead, this is a number of best guess hypotheses based on what I saw in the Spring game.

The push of this new offense is to apply more horizontal alignment pressure with the receivers, create a consistent set of keys for the offense, and operate from a smaller set of plays. Harsin’s offense sought to primarily exert pressure on the C/D gaps and the alley and then work to vertical opportunities. Under Applewhite the offense will build off running pressure in the A & B gaps combined with outside pressure in the form of quick passes.

The set of blocking series for the offensive line has been slimmed down and rethought. It looks like we are focusing on inside zone, power, and outside zone (in the Spring game we showed outside zone alignments and protections but never actually ran the play). It remains to be seen if the pin n pull blocking series, our most successful and most volatile running play from last year, survived the overhaul. My hunch is that it has been scrapped because of the blocking coordination and practice time it would require to keep. Major has taken the run game and cut some of the diversity but definitely increased the versatility of running plays left in the playbook.

You will notice a greater frequency of formations that feature 3 or more wide receivers in this offense. By reducing the number of offensive players in the box, Applewhite is counting on his decision makers to correctly identify and respond to the defense. He is aiding them by trying to give them consistent pictures, timing, footwork and then training their responses via high repetition.

Probably the most significant change to the offense is the alignment of the QB. This is an area where we clearly studied and borrowed from Chip Kelly’s Oregon offense. Other than short yardage offense, the QB is aligned 5 yards off the ball in every snap in the Spring Game. 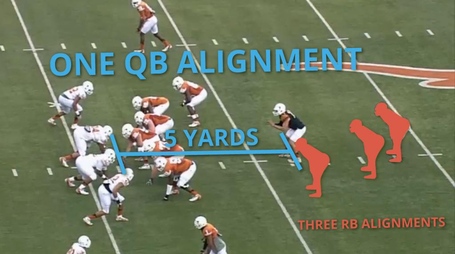 This gives the obvious benefit of regularity for the center’s snap and QB’s footwork, but the more significant benefit is for the running backs. Making the QB stationary means that the QB has an opportunity to read defenders as the running back closes for the exchange (more on that in Part I of the series), but it also means that the running back will get possession of the ball in the same position, with the same timing, play after play. The standardization of the QB-RB mesh point has some significant, if subtle, ramifications for the backfield.

Ideally, a smaller set of alignments and plays will also make it easier for the offense to change the play at the line of scrimmage and operate at high tempo. This is not a complex offense, but it is one that will demand a high level of understanding and execution from the players. Overall, you can start to see how these small, efficient changes are designed to put the backfield in a position to read the defense and make decisions before and after the snap. Applewhite is attempting to give them smaller set of tools to master along with a more consistent picture from week to week and play to play.

Sounds great, right? What could go wrong? Hopefully over the course of the five part series to follow we’ll have a chance to average out to a balanced view of the where the team was at the end of the Spring by looking at areas that look promising for 2013 as well as considering things that look like they could hinder this team from reaching it’s potential.