College Football All-Time Wins: Do You Care? Does Anybody?

Texas has more wins than any other major college football program except Michigan. I see this referenced, never discussed.

Share All sharing options for: College Football All-Time Wins: Do You Care? Does Anybody?

Texas has more wins than any other major college football program except Michigan. I see this referenced, never discussed. I've got two theories:

2) Discussing All-Time Wins is too "We Are The Jones-ish." Talking about wallet size, dedicated networks, and monster-size scoreboards only invites questions about "why don't you win more conference titles?" .. . . or "why can't you ever beat Kansas State?" . . . or . . . . well, basically any number of things dealing with scoreboard results rather than dimensions.

So why bring this topic up now? No good reason other than I got curious and started digging around. I am sharing what I found here but must remind you that the first rule of All-Time Wins Club is you don't talk about All-Time Wins Club.

1. Head Starts Are Everything

Texas trails Michigan by 36 games. Guess what? Texas was already 34 games behind the Wolverines before the Longhorns played their first game in 1893. All that has happened n the last 120 years is that Michigan has gained a whopping two games. Texas was actually closer than the initial 34-game deficit before the calamitous 2010 season happened.

The 5 Phases of chasing the Wolverines 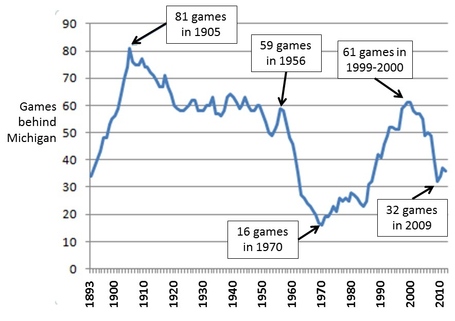 Texas started in a hole and quickly dug deeper. After its first 13 seasons, Texas had gone from 34 games behind Michigan to 81. The most impressive spurt by the Wolverines was the last five years of this window, which were also the first five years of Coach Fielding "Hurry Up" Yost's tenure in Ann Arbor. According to Wikipedia: "From 1901 to 1905, [Yost's] "Point-a-Minute" squads went 55–1–1, outscoring their opponents by a margin of 2,821 to 42."

Despite some hiccups under Jack Chevigny and Ed Price, Texas trimmed 25 games off Michigan's lead in the next 51 seasons, just a hair under 0.5 wins a year.

In Darrell Royal's first 14 seasons, he shaved the lead by 43 games, from 59 to 16, the closest Texas has ever been. DKR lost ground his last six years, but Texas still managed to pick up 33 games on Michigan during his 20 seasons.

The joyride that was the late 80s and early 90s for Texas football saw the Horns give back every inch of ground that Royal had gained. Texas was down by 59 after the '56 season . . . and was again down by 59 games after the '97 season.

Time for a hit of Macky Tobacky . . . Texas' stockpile of 10-win seasons and Jim Tressel helped tighten things up. 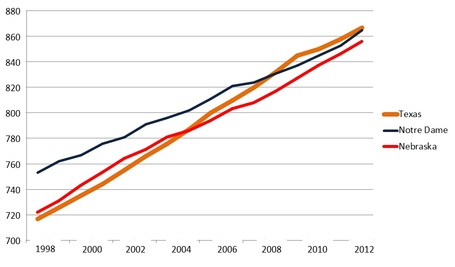 Texas was fourth in all-time wins when Mack took over. The Horns passed Nebraska in 2004 and Notre Dame in 2008. Last year's run by the Irish at the national title pulled them within two games of Texas. There may well be some jockeying back and forth when Texas plays Notre Dame in 2015, 2016, 2019 and 2020. Don't expect the Huskers to go away as they will likely thrive in the cushy Big 10.

The table above lists the top 10 major programs along with four Ivy's that are a reminder that they started playing first and had a lengthy reign of terror between the administrations of Presidents Garfield and Coolidge. A couple of notes:

Before you get to giddy over that 12-3-1 record against the three SEC teams on the list, just be aware the last one of those wins was the 1982 Cotton Bowl against Alabama. Texas is 0-2 since. And while Texas is a paltry 3-12 against Southern Cal and Notre Dame, the Horns are a robust 84-52 (61.3%) against everybody else.

After 120 years, there’s not really that much separation between teams at the top. It’s easy to think of how much closer Texas could be to Michigan if only a few flukish outcomes had been averted:

1973 – Miami 20, Texas 15 – RB Joey Abbourssie had broken away from the pack and was running headlong toward the goal line. The closest defenders were way behind him. Then, whoops. Without being touched, the ball popped out. It was one of Texas’ 8 fumbles that day, spoiling the season-opener for the team selected pre-season No. 1 by Sports Illustrated.

1999 – North Carolina State 23, Texas 20 – Points are hard to come by when a team only has seven first downs and 172 total yards . . .UNLESS that team blocks three kicks, two of them punts that were returned for touchdowns.

Of course, this kind of thing cuts both ways. Texas has a two-game lead over Notre Dame thanks in large part to the kindness of others:

2004 - Texas 27, Kansas 23 – Vince Young would’ve never been able to hit Tony Jeffery with the winning 21-yard TD pass if not for the Jayhawks surrendering a 4th and 18 scramble by Young . . .AND failing to ice the game when an offensive pass interference penalty gave the ball back to Texas for the winning drive.

2005 – Texas 25, Ohio State 22 – The Young-to-Sweed pass put Texas ahead to stay, but Ohio State missed two chances to put the game away. First, Buckeyes' tight end Ryan Hamby bobbled a pass in the end zone. Then, a motion penalty turned a 45-yard field goal attempt into a 50-yard one that Ohio State kicker Josh Huston barely missed. It was Huston's only miss after five successful kicks that night.

1969 – Texas 15, Arkansas 14 – If you’ve read Terry Frei’s “Horns, Hogs, and Nixon Coming,” you are well aware that Arkansas had one touchdown nullified by a flukish penalty and passed up a chance to go up by two possessions by throwing an interception instead of setting up for a chip shot field goal.

But why stop there? Late game heroics have flipped many a likely defeat into the win column: . . . Bret Stafford-to-Tony Jones to beat Arkansas . .. Stoney Clark stonewalling a reverse against OU . . . Major Applewhite hitting Bryan White and Wane McGarity at Nebraska . . . Jamaal Charles exploding for 200+ in the fourth quarter against Nebraska . . . Vince Young not blinking at a 35-7 deficit against Oklahoma State . . . Case McCoy’s miracle drives against A&M and Kansas.

I could go on, but I’m starting to drift from All-Time Wins Club to Ancient History Club and they both have the same first rule. All that’s left now is waiting to see if Texas moves up relative to others on the All-Time List in 2013, in which case we’ll be talking about scoreboards against whichever victims fall prey.