"OU - they got those horse-pig things."

Share All sharing options for: BOOMER & SOONER: THE OKLAHOMA HORSE-PIGS

Jake Trotter and Max Olson polled a number of Big 12 players on myriad subjects at Big 12 media days (Could Charlie Weis' boxer-briefs clothe an entire Burundian village? Best Reese Witherspoon romantic comedy? Is our reality merely a patchwork construct of perspectivist cave shadows or was Plato probably just a fat Greek pedophile?) but by far the best responses were yielded by this inquiry:

Who has the worst mascot?

The players resoundingly chose Iowa State. Yeah. We tried to address this three years ago. 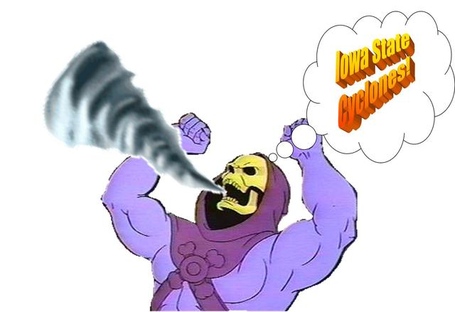 But the other runner-up responses yielded the most amusing things to ever come out of any Big 12 media day, at least since Art Briles accepted his male pattern baldness and stopped wearing a transvestite wig.

Runner up for worst mascot: the Oklahoma Sooners. Why?

"OU – they got those horse-pig things."

He's referring to a pony. A Big 12 player just dismissed the lovable, rotund little prancing Sooner ponies as "horse-pigs." HORSE-PIG. I'm not letting this meme die. I swear it on all that is holy.

In the same vein, I'd like to propose that we call a cooing newborn baby a "baldass-poopy-monkey thing", a playful polar bear cub an "albino-labrador-rat", and describe a stunning ocean sunset as "dayglo-over-some-salty-fish-piss."

Runner up for worst mascot: the irritating Kansas Jayhawk. Why?

"KU. It’s a mythical bird. Why wouldn’t you go with a blue jay or something that is known to be aggressive?"

"....something that is known to be aggressive." Not only does this answer demonstrate a highly cultivated sense of irony, but also a surprising grasp of ornithology, for the blue jay is a plucky and determined defender of its young. But we probably want to explore hawk, falcon, or eagle for aggression and majesty before thinking "blue jay."

I like to imagine that it was Texas guard Trey Hopkins who said this while kitted up like a 19th century English naturalist: blousey-white shirt tucked into smart pantaloons, waistcoat, floppy straw hat; peering distractedly through a single lens telescope, butterfly net tucked into his belt.