Share All sharing options for: BC Brainstorm - Advanced Football Stats

Greetings, Barkers and Barkettes! As we currently sit becalmed in the offseason doldrums, I thought I'd take this chance to get all our resident big brains to weigh in on a topic that's been on my mind for some time - advanced stats as a way to better understand the game of football.

Baseball was first served in the advanced stats revolution, and today (leaving dolts like Tim McCarver out of the equation) statistics like OPS (On-Base Percentage plus Slugging Percentage), FIP (Fielding-Independent Pitching) and WAR (Wins Above Replacement) are an integral part of both broadcast discussions and water-cooler conversation about the game.

Of course, the baseball stathead has the advantage of a game that's pretty easily broken down into individual, discrete interactions (pitcher throws ball, batter swings at ball and does or doesn't connect, ball goes somewhere and someone does something with it, repeat). Basketball is orders of magnitude more complex to break down and understand, but advanced stats are making a good amount of headway here as well. Measures like Player Efficiency Rating, shot charts and True Shooting Percentage have gone a long way towards helping fans understand effectiveness at the individual and team level.

Football is the Final Frontier for advanced statistics. In many ways, it's even more complex than basketball - while basketball may see a player do seven or eight different things on a given possession, football has more than twice as many players trying to execute assignments in a relatively vast physical space in the service of schemes that may never be fully know-able to anyone who wasn't wearing a headset.

With that said, progress is being made in the advanced stats arena. The NFL has led the way, with Football Outsiders taking more of a top-down approach in evaluating teams' efficiency through their DVOA (Defense-Adjusted Value over Average) metric (among many others) while ProFootballFocus.com has pioneered the 'bottom-up' approach of grading individual players on every play. Both sites do a great job, and there's a good degree of synergy and overlap in their approaches (as well as a hilarious degree of passive-aggressive derision of each other in their sites' respective comments sections).

College football hasn't been left completely out in the cold. Bill Connelly (who runs SBNation's Football Study Hall site, now frequently featuring our own Nickel Rover!) has codified his encyclopedic knowledge of D1 teams in his F/+ ratings - check out his stats-based approach to evaluating Texas' 2013 prospects here. Nickel's not the only Barker smartening up the football world - Huckleberry's AdjustedStats.com is a tremendously valuable resource for understanding the comparative strengths of teams who may share few, if any, common opponents.

Despite this growing body of cool stuff, however, the thought processes behind - and insights from - advanced stats are only starting to make a dent in the broad conversation about football, where pre-packaged narratives and pop-psych missives on want-to and winnerness still largely rule the day. Some of that is understandable - any sufficiently advanced technology is indistinguishable from magic, and any sufficiently complex system that's integral to people's lives will naturally breed its own mythology. Some of it is due to the calculated mythmaking of the Sabol's NFL Films (to which the NFL owes, at minimum, 10% of its total monetary value). And, of course, some of it is due to laziness and ineptitude from a lot of folks paid to tell the public about the sport in some form or fashion.

As the astute reader has likely surmised from this lengthy preamble, I'm pretty excited about the prospect of advancing the advanced stats movement in football. I think there's a world of opportunity to delve even deeper into understanding the effectiveness of schemes and players, as well as to bring insights to passionate fans who know a lot - or only a little - about the game's inner workings.

So I come to you, dear Barkers, with this question - what kind of information would help YOU better understand and appreciate the game of football? Maybe think about it through the lens of the 2012 Longhorns - what are the types of things that would help answer your questions about what went right and wrong, and to understand which players contributed the most to our success?

Here are some possibilities that I think could be very interesting: 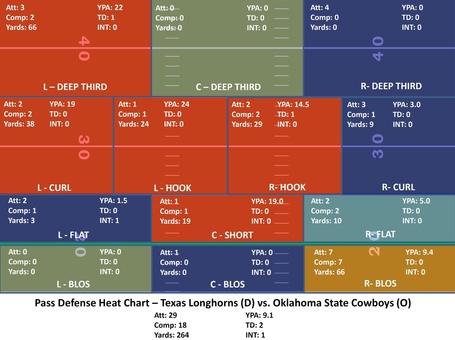 Charted from the 2012 Texas-Oklahoma State game

The general idea here is to give a sense of how well or poorly a defense protects (or an offense attacks) certain areas of the field in the passing game. Network broadcasts have offered similar types of charts for a while now, but for both offense and defense I think it makes sense to think about the field in terms of the 'zones' that a pass defense is structured around defending - flats, curls, hooks, etc. Of course, a viewpoint like this would get more interesting with a full season's worth of data... 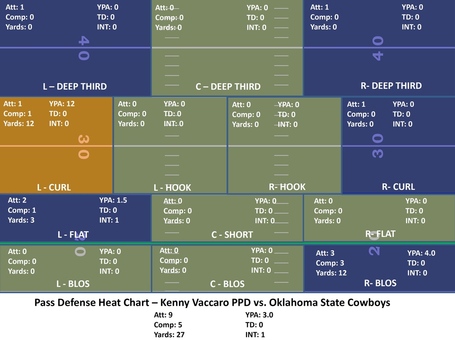 ...or when broken down for individual players - defenders judged to be the primary pass defender on a play (the above is for Kenny Vaccaro against OSU) or receivers.

I think you could do some very cool things to break down and understand the effectiveness of line play - both in general and in the service of specific schemes and plays. What about breakdowns of how well the Longhorns attacked each gap with, say, the Inside Zone play last season: 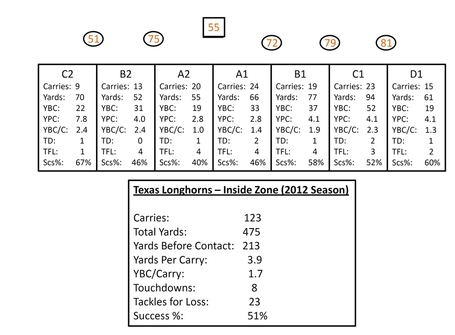 Above data is illustrative - aka made up

As well as breaking down how each of the key blockers performed on runs to 'their' gap: 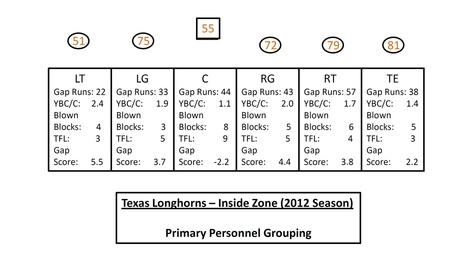 Naturally, you could flip the script and look at how individual DTs and LBs performed on runs to 'their' gaps as well.

I've got some other ideas cooking as well, but at this point I'd like to turn it over to you guys. Do any of these breakdowns seem like things you'd be interested in - either in review of a past season or week-to-week in 2013? What other kinds of stats/graphics/general insights would help you get a better handle on what you see on Saturdays and help answer the questions you have about your favorite team(s)?

I'd love to know.