(Would rather be writing about the basketball team)

Share All sharing options for: 2013 Kansas Football Preview: Jayhawk State of the Union

It’s that time of the year again. The days grow shorter, the mercury has abandoned triple-digit territory, and Barking Carnival publishes its infamous States of the Union. Yes, college football is nigh my friends. Nigh, I say!  Nigh!

This season, I drew the most coveted of all SOTU assignments: the mighty Kansas Jayhawks.

Why is Kansas the most coveted SOTU? You ask. Don’t they suck?

Keen observations, Carnival-goer! Yes, Kansas does indeed suck. The Jayhawks suck so badly, in fact, that the most complimentary description that its head coach could summon for his team was "pile of crap." Of course, coming from Charlie Weis, that back-handed compliment brings to mind metaphors involving pots and kettles. Still: this is a bad team. A very bad team. So bad that Weis’s assessment was actually more offensive to piles of crap than it was to the Kansas football program.

So why, every year, do Barkers so desperately covet the Kansas SOTU? The answer is simple: you won’t read it. Nobody cares about Kansas football. Not Kansas students, not KU alums, not the players, not players’ mothers,  and most of all not you, the faithful readers of Barking Carnival (who, right this very minute, are doing something -- anything -- other than read this, the 2013 Kansas Jayhawk State of the Union). That complete lack of interest equates to freedom. The freedom to write about anything the author chooses, unbound by editorial guidelines.

You didn't read them, so you didn't notice.

But this year, it’s going to be different. For once, a Barker is actually going to write about KU football. Not because I care about the Jayhawks, but because I don’t care about anything else. And so it is with wholesale apathy that I embark on this, your 2013 Kansas Jayhawk State of the Union.

KU Football at a Glance

Mascot: The Jayhawk, a hypothesized double-Y chromosomed creature that scientists predict would result should skateboard legend Tony Hawk and the nation’s first Chief Justice of the Supreme Court, John Jay, ever share an evening of beautiful, heartfelt lovemaking. 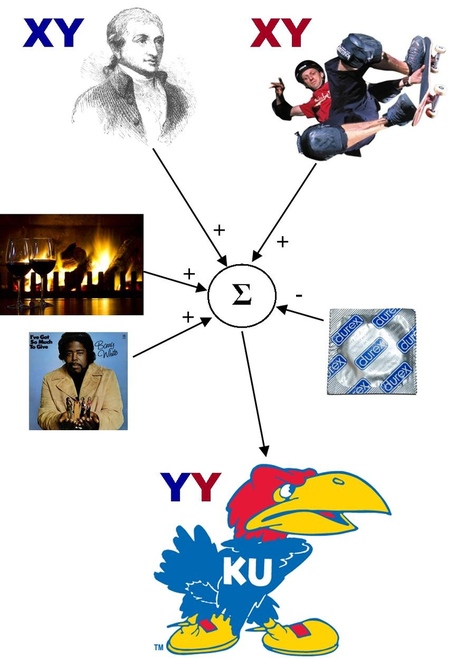 Those scientists.  Always up to something.

Location: Formally, it's "Lawrence, Kansas." But to friends, it's just "Larry, Kansas."

Program famous for: Annually getting the shit kicked out of it by Nebraska. Getting crap beat out of it, year-in and year-out, by Oklahoma. Losing almost every game it has played against Oklahoma State and Colorado. In recent years, receiving annual woodshed beating from Texas.

Recruiting base: Kansas has 2.8 million residents, approximately the size of the Tampa-St. Petersburg metropolitan area.  So there isn't great in-state talent.  The good news is that most of the state's 14 FBS prospects choose to go elsewhere.

Coach Weis was being generous when he described Kansas’s 2012 football team.  Piles of crap are too quaint, and don't conjure the violent hellishness of Kansas's nightmare last season.  The Jayhawks went a putrid 1-11, with the only win coming over a non-FBS opponent. Following its season-opening two-touchdown BEATDOWN of South Dakota State, Kansas rattled off 11 straight losses. One of those losses was a 21-17 heartbreaker to Texas, a game that Kansas was 12 seconds and an easy (but dropped) interception away from winning.

When the dust settled, KU finished ranked firmly within the bottom quartile nationwide in both total offense (93rd) and total defense (113th). Did I mention that this team should have beaten Texas?

Kansas returns three starters on offense (RB James "Not Chris or Phil" Sims, WR Tony Pierson, and RT "Abody" Aslam Sterling). Coming off a dreadful offensive performance in 2012, the personnel turnover is actually a positive. Sims is one of the league’s top running backs, and will likely carry the load for the Jayhawks.

For the second season in a row, Weis will start a first-year transfer at quarterback. This season, BYU transfer Jake Heaps will lead the KU offense. Heaps showed promise as a freshman at BYU, and is looking for a fresh start. And his last name complements the team's season motto ("KU 2013: we're a Pile of Crap"). So, you know, maybe he’ll pan out. Or maybe not.

Weis has to replace four out of five of his OL starters. While churn may be a net benefit for Kansas at some positions, lack of experience rarely portends well on the OL. Expect to see Heaps running for his life more often than not.

On defense, Kansas returns only two starters: LBs Jake Love and Ben "Mr. Haney" Heeney. Again, the KU defense was awful, so the high turnover appears to be good news. Heeney, a middle linebacker, was a second-team All-Big XII selection last season and the best player on a terrible 2012 defense. His return is critical. If anyone understands what a difference experienced talent at MLB can make, it’s Longhorn fans.

Weis’s recruiting class was very heavy on JUCO recruits (19, in total). The real gems of the class were a trio of highly-regarded JUCO defensive linemen, including DT Marquel "Puffy" Combs and DE Chris "Steve" Martin. Between these guys and Heeney, KU should be pretty stout against the run in 2013. But there's no Aqib Talib in the secondary or Talib Kweli on Weis's iPOD.

KU will start four newbies in the defensive backfield. Fortunately, Teddy Roosevelt has yet to legalize the forward pass. OH SHIT WAIT, THAT’S NOT RIGHT! Yeeeeeeaaaaaahhhhh... Good luck with your green DBs in the pass-happy Big XII, Dave Campo.

Following the nightmare of last season, KU's program has only one direction to go. The law of averages, the return of Kansas’s best player on both sides of the ball, and the infusion of new JUCO and transfer talent at key positions makes a better showing in 2013 very likely. But inexperience on the offensive line and in the defensive backfield will allow good Big XII teams to manhandle the Jayhawks. I expect Kansas to improve, but not enough to go bowling. This year, Kansas will play like something more akin to a puddle of urine than a pile of crap.  Call it somewhere between 3-9 and 5-7.

Previous Kansas Jayhawk State of the Union Previews ... it's like 2010 never even happened.