Female attendance at all alumni athletic functions was at an all-time high this spring. As the unofficial deputy of college football sidelines, I am deeply honored that the Patriarch Bro Coach, Kliff Kingsbury, will begin his career gracing the sidelines in Lubbock. It's all cutoff Under Armour sweatpants, v-necks, tat sleeves, and Vans these days. That triple-pleated pants wearing ginger OC in Austin has a little catching up to do... 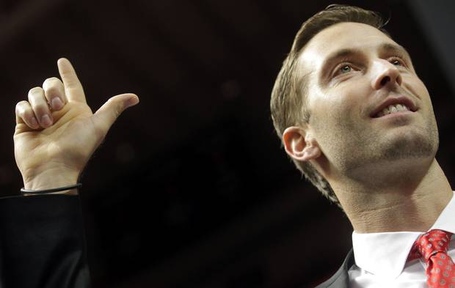 Yeah, it turns out Kliff didn't need any help from Stephen Spielberg after all...

It might not be all that weird in Lubbock now to roll into work on a skateboard or back a Miata into a parking spot. I have to go back to the breaking of the color barrier to think of a more impactful moment in all of sports.

Balance can be a good thing and that's one quality I really like about this Red Raider football team Kliff is inheriting. They ranked near the top of the league in preseason All-Conference picks, yet have been picked near the bottom by most of the predictions. Does Not Equate. The only question mark, and it's a fairly significant one, is the quarterback position. We'll get into that more later, but overall, this is arguably Tech's most talented roster since 2008 when Michael Crabtree scissor-kicked Longhorn nation right in the nuts, cleats up.

I'm not sure there is a better #1 and #2 receiving threat in the conference than Eric Ward and Jace Amaro. Good backs. Solid line players with one elite player. Dangerous complementary weapons. This team shouldn't have trouble establishing a serviceable run game and getting people open.

It sounds like Michael Brewer won't be available for the start of the season, so there's a chance Tech will be suiting up his replacement to face Brewer's replacement. From Lake Travis. It's either walk-on Baker Mayfield or Prosper's Davis Webb. I like having both them on the roster, but I'm not sure I was ready to find out how good they were yet. I always like to go with the guy for whom the game has slowed down the most. Mayfield's exceptional TD:Int ratio and mobility might suggest he could gain favor. It's hard to be optimistic about the upside of a talented team being any more than 8 with this situation.

The Raiders feature a nice pair of backs, who have projected similarly to their rankings. Kenny Williams is a low four star guy and DeAndre Washington is a high three star guy. With appropriate scheme, they will produce and early indications seem like Kingsbury is sincere in his commitment to feature them. Quinton White and Tyler Middleton are change of pace guys, but the former will be the workhouses to a surprisingly more run game oriented attack than what the hire would suggest. Which may or may not be by choice at this point.

I've always appreciated Eric Ward and Jace Amaro for the way they play football just as much for their pass catching skills. On any hitch screen or run play, you are very likely to find each with a DB pinned to the turf and forcing him to lick taint. Their games are as much mental as physical and the Tech offense takes on a different identity without Amaro in the lineup. I expect a lot of trip sets with speedster Jakeem Grant to generate easy Air Raid staple triangle reads and hitch screens to help out a young QB. One or two of those guys will have a good matchup and the Amaro, Ward and Grant unit is lethal screen personnel. Bradley Marquez, Reginald Davis, Derreck Edwards and Shawn Corker provide talented depth of what should be a team strength, as it seems to be every year in Lubbock.

Overall, this isn't a dominant unit, although sophomore LT Le'Raven Clark is a current Big 12 star and potential NFL staple if he stays healthy. Clark has great athleticism and aggression and will only get better as he polishes technique. We'll find out how exactly how far along he is in a game 3 matchup with Devonte Fields' 2013 debut. Beau Carpenter and Alfredo Morales have graded out with mostly solid starts in the past at the guard position. Redshirt freshman Trey Keenan has made a push for Morales' gig. New center Jared Kaster, who won the backup job as a true freshman, will be an interesting spot to watch as his athleticism and cerebral awareness could be undermined by a lack of bulk. Right tackle could be a question mark as well, but has largely been penciled in with Rashad Fortenberry since last year. We've yet to see the athletic Fortenberry on the field due to injuries and the plan B would include Carpenter bumping out to tackle. This group resembles the more zone blocking adept outfit that Neal Brown was in the process of building. That could factor into run game strategy and affect the decision at QB.

The Tech defense made big strides last year finishing 4th in league play total yardage. A switch to a 3-4 scheme could potentially tighten up perimeter run defense and zone coverage to increase turnover production could help a solid group of returning veterans make another stride. Question marks could arise at ILB and CB.

A deep unit is highlighted by All-Big 12 Kerry Hyder. DE Dartwan Bush returns as well and was good for a couple of punts a game last season. NT Dennell Wesley will start in the middle and is the strongest guy on the team. He's a solid, but not necessarily spectacular talent. Behind that crew is a group with a couple players not generally getting backup snaps. Branden Jackson is a big, rangy athlete at DE, while the scheme change should prevent an inside guy like Jackson Richards from being assigned to plays in space as a 4-3 end. Backup NT Donte Phillips has shown to be more than a warm body in previous live appearances. They aren't an elite group by elitism standards, but it's been a while since the Raiders returned with this many competent bodies on the front.

The OLB position has been buzzing with optimism about how talented sophomore Pete Robertson is now being deployed. Robertson will generally be Tech's primary pass rushing threat. He's got an explosive burst and surprising strength for a 225-lb frame. JUCO Andre Ross provides relief, who joined late summer over offers from OU, TCU, WV and ASU. He allegedly runs well for a 6'4", 230-lb frame and won the backup gig by showing up. We shall see, but both are nice edge talents. Veteran Terrance Bullitt, who has now been eligible for the last 9 consecutive years without attracting NCAA scrutiny, will man the other OLB position, which could be defined a nickel LB. He's been solid for at least six of those nine years, and I bet he closes out his decade on campus in style.

Will Smith and Sam Eguavoen are returning starters, who haven't had the most consistent careers to date. At least Eguavoen can blame his confusing heritage. Smith runs well, but will naturally drop to 200 lbs when he stops playing football and resumes his youth acting career. Eguavoen has more physical ability, but has been sketchy with his reads for stretches at a time. Blake Dees has a couple years of experience as well, but checks in around the 210-215 range. Micah "won't leave you in" Awe is even smaller. There aren't any natural bangers in this group, so a committed running game between the tackles could expose this unit.

Safety has the biggest hole to fill with Cody Davis' departure. Tre Porter has quietly been a good Big 12 starter playing out of position for his previous years. He'll be the guy with the most hope for filling the Davis void. J.J. Gaines replaces multi-year starter D.J. Johnson and brings better coverage skills, but has a smaller frame. The corners are a bigger concern for this secondary with JUCO prospects Bruce Jones and Ola Falemi winning the #1 jobs. Good thing we don't play in a passing league! Jones is a returning starter and suffered from roller coaster syndrome. Falemi is a 2nd year JUCO as well, but he hasn't appeared in any critical moments. A shift from man to zone is a better fit for their skillset as I wouldn't classify either in the lockdown category. There are some newcomers still in the mix here.

Part of the reason Tommy Tuberville doesn't work at Tech any more is because it took him 18 months of Jakeem Grant being on campus before he placed him on the field for a kickoff. He's good for 3-7 points per game by flipping the field once. Ryan Bustin and Ryan Erxleben have been reliable in kicking duties.

Things felt pretty good in Lubbock leaving the spring and Brewer appearing to have a comfortable lead on the QB jog. This once looked like a team with an improved defense and run game, good special teams, a risk averse 3rd year trigger man and a chance to surprise people with 9 wins on the upside. I still like the defense, run game and special teams, but this QB situation seems to set up for more competitive losses with the same 7-win record. The offense has a chance to be shockingly legit, but they'll still have to make a living passing the ball to set up an effective run game. This new QB playing with his hair on fire out of the gate seems a bit optimistic to me, but I guess it's happened before. I think Kliff will have one Jones Stadium upset in him this season for a shot at 8 wins even with the fresh meat. There are definitely some good, draftable prospects littered across this roster with more on the way, assuming they have the proper fashion sense.

GUNS UP, Big 12. We're comin double barrels with collars popped. Unless, of course, we have a losing season, in which case we'll send Kliff to Austin for a hipster makeover... 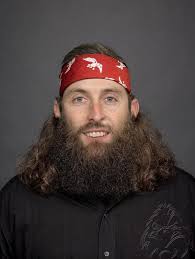